Shortly after my wife and I moved into our first house, I decided to build out a home theater. I spent months researching receivers, speakers, and cables. A number of friends chimed in with suggestions. Once I felt confident with my configuration, I began acquiring each component, piece by piece.

With the help of an audio-savvy friend, I finally got my theater up and running. I even remember the first DVD I watched was the Eagles: When Hell Freezes Over because it was available in DTS. As those first few chords of Hotel California echoed through my home, I felt excited and relief that it was over.

Over the next decade, we moved four times. With each move, the thought of setting up my theater was daunting. Running speaker cable became such a chore, that by the third move, I had decided I didn't need 5.1 sound, and kept the rear speakers in boxes. Not only was the setup a chore, but children arrived on the scene, and they couldn't figure out how to work the complicated Yamaha remote. Honestly, I didn't know what most of the buttons on the remote did myself. When we finally moved to Utah, I decided I needed a simpler setup. So I purchased a speaker bar that connects to a subwoofer via Bluetooth. It requires all of one optical cable. My kids no longer need my help to watch Scooby-Doo. My old 5.1 setup sounded better, but the hassle no longer outweighed the benefits. 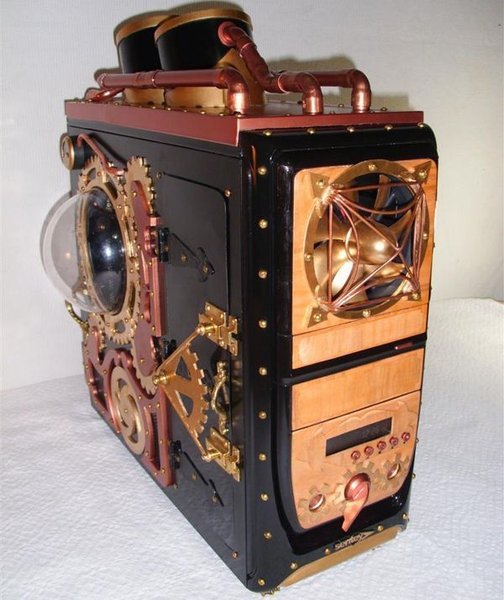 When Steampunk meets the Titanic in PC design

My experience with my home theater matches what I hear from our customers and their desire for low-hassle computer.

I used to build my computers the way I built my home theater: over-designed and full of complexity.

Today, I prefer simple, elegant computers built to accomplish what I need them to do without being over-designed. What do I mean by this? Here are a few examples:

To be clear, I'm not saying there aren't scenarios where all of the above make sense. But they often add significant expense to a new system, and they all add complexity.

The goal of our sales staff is to help you configure a computer that fits the task its hired to do. They do this by focusing on the components that influence performance to the greatest degree. That might mean scaling back in some areas while putting more of your budget towards one or two components that will give you a noticeable performance increase.

One benefit from building an elegant and less complex computer is that it tends to be more reliable than a less focused model. We like this idea so much that we created just such a system in the Puget Systems Obsidian. The Obsidian actually gives you fewer component choices! But the components it does include are those we've picked specifically for their low, field-tested failure rates.

Occasionally we're asked to substitute a less expensive component into the Obsidian, and you can probably guess what our answer to that question is. In a way, our philosophy towards the Obsidian is like the one Henry Ford had towards his beloved Model T. Ford once remarked that "Customers can have a Model T painted any color he wants so long as it is black."