In Search of the Best Browser

I have a love/hate relationship with browsers. And by browsers I mean Google Chrome.

There's not another program on my computer I use more than Chrome. I live in Chrome. But it also frustrates me more than any other program. A few years ago I would have launched a dozen separate programs in order to do my work. Today, every tool I need at Puget Systems, with the exception of a VOIP program, is rendered through Chrome. So when Chrome gives me problems it affects a lot more than just browsing Facebook or Reddit.

With the arrival of Windows 10, I decided that it might be a good time to inventory the programs I use each day, starting with my choice in browser. Was Chrome still the best out there or had a competitor surpassed it?

Windows 10 includes a new, basic browser called Edge. If you use a touchscreen you might appreciate the ability to markup webpages with notes and share them.  Microsoft appears to be taking a different approach with Edge than it did with IE. Instead of competing with Chrome or Firefox in features arm race, Edge includes the basics in an easy-to-understand package. I was pleasantly surprised at how well it worked. But the lack of extension support keeps it from being the browser I use each day. I continued my search. 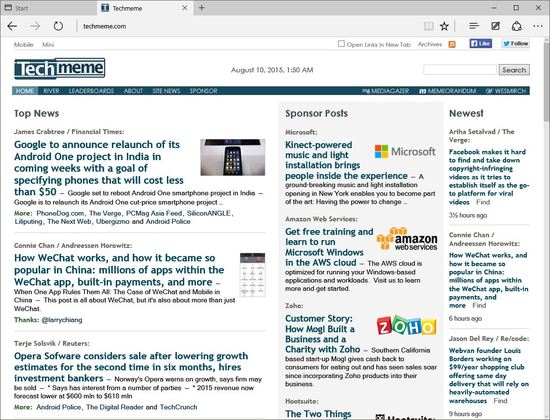 Microsoft really wants Edge to be your only browser.

Google released a beta version of Chrome back in September of 2008. After years of using a combination of Internet Explorer and Firefox, Chrome brought a sleek, screamer of a browser to the game, and I loved it. It made IE and Firefox feel like sluggish memory hogs. Chrome has served my needs quite well over the years.

But Chrome began acting up almost immediately after I installed Windows 10. Chrome wouldn't shut down without having to kill a process or two. Videos on ESPN would stutter or simply refuse to play. Sometimes an open tab would go rogue and give iTunes a run for its money in memory usage. I run a few extensions, and will admit the problem could originate with one of them. I tried disabling, even uninstalling them one by one. But the issues persisted.

So two weeks ago, I installed Firefox. I then uninstalled Chrome to force myself to give Firefox an honest shot. I installed a few of my favorite extensions: 1Password, Dictionary, FireGestures, Shortly and uBlock. I then fought with Windows 10 for a while because it wouldn't allow Firefox to set itself as my default browser. I began to wonder if I had unknowingly agreed to use Edge as part of the free Windows 10 upgrade agreement. After some cursing and a reboot, I finally got it working like I wanted.

And I really couldn't be any happier. I'm currently running Firefox version 39.0.3 and it's been rock solid. Yes, it does use a little more memory than Chrome did, but I have 16GB installed on my Serenity so that's not an issue. I haven't had single tab go rogue on me yet. Videos from YouTube, Netflix, and HBO Go run smoothly. Spotify streams my music without a hitch. And all the tools I use for my job work beautifully. The only feature I really miss with Chrome is the instant search results from the omnibox. I haven't found an extension that duplicates that feature, and I miss it.

But stability is paramount. I'm no longer willing to trade reliability for a little more speed. Chrome, we had a good run, but it's time to move on.

If you're installing Windows 10, give Edge a try. It may meet your needs. But if you've made it this far, I'll bet you demand more features than what Edge offers today. If you've been running Chrome for many years, it might be worth taking Firefox for a test run.

What browser do you run today, and what are your favorite extensions?