I recently upgraded my home internet connection, and I now officially have the fastest internet of anyone here at Puget Systems - even faster, technically, than our connection at the office. What did I get, you ask? CenturyLink 1 Gigabit Fiber Internet. Fiber to the home; in fact, in our case, fiber to the bedroom.

I had Comcast cable internet before this, and it was fine - but it wasn’t super fast, especially on the upload side of things. I was getting 50-60Mbps download and about 5-6Mbps upload. That was fine for gaming and watching online videos, but uploading videos to YouTube was painfully slow and streaming to Twitch required me to limit the bitrate (quality) to avoid impacting gameplay. Comcast also effectively required a cable TV subscription alongside internet: without it, the internet alone would actually cost *more* than the two together. Go figure :/

Anyhow, CenturyLink sales folks have been coming to our door for the last couple of years, trying to sell us on the move to DSL. I’ve used DSL on other people's’ computers, though, and was never impressed - so I always told the wandering sales folks to call me when they had fiber available. I even signed up for a notification through CenturyLink’s website to be contacted when fiber reached us. Then, a few months ago, we started seeing trucks around our neighborhood stringing up new cables on the utility poles. I suspected that might be fiber, as it wasn’t replacing any of the existing cabling… and sure enough, CenturyLink notified me shortly afterward that fiber internet, at up to 1Gbps speeds, was now available in our area.

So, seeing as how I ought to keep my word - and how affordable 1Gbps internet was when looking at the price-per-Gbps - I signed up. I will admit that I hesitated for a little: everyone I knew who had tried out CenturyLink DSL reported poor performance and then a mess when they tried to cancel during the trial period. Some folks even said they had to deal with collection calls and paid a bunch of money even though the trial was supposed to be risk-free. Customer service didn’t seem to be CenturyLink’s strong point, to put it mildly, but that feedback was all based around people trying to cancel. If fiber internet was as good as advertised, I reasoned, I shouldn’t need to worry about cancelling. And to back that up, I found online accounts of people upgrading in my area which were overwhelmingly positive.

So I went for it! And a few weeks ago, right on schedule, two installers for CenturyLink showed up and got to work. They ran a fiber line down from the utility pole to the side of our house, where they placed a converter from the type of fiber line used there to some other type of fiber cable (I don’t know all the details). That box is on the outside of the house, but in a weather-proof shroud as you can see below. 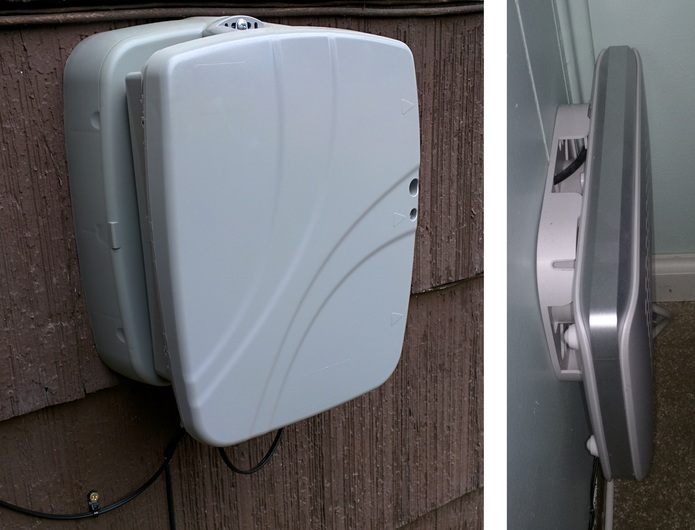 From there, they ran it under the house through our crawlspace and over to the bedroom. This I requested specially and it gave them a bit more work to do - but we have the main hub of our electronics in the master bedroom. The router, my computer, my son’s computer, and the printer are all there, and I’ve found it to be the best place for locating the wireless router to ensure good reception to our HPTC in the family room. Anyway, the fiber cable that runs under the house comes up near the bedroom, and then in through the wall to another box. That converts the fiber to Ethernet, which then runs around the bottom edge of the room to the router. 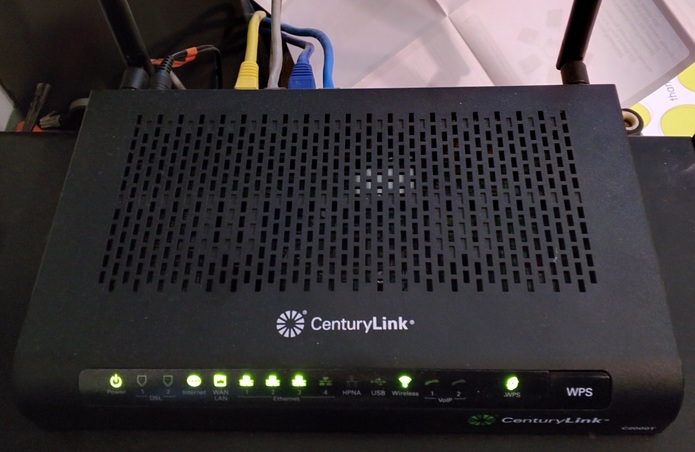 This router is one I purchased from CenturyLink. They give you only two options: buy it outright or rent it. They actually call it a modem in many places, but it is basically a router that they have made for them, and which is capable of handling the 1Gbps speeds they offer. You can get some other routers to work with their service too, if they have the right configuration options available, and I got my older Asus RT-N66U working in place of CenturyLink’s… but it was only able to sustain about 150Mbps download and 400Mbps upload. I tried to reach out to CenturyLink to ask if I could return their modem for a refund, as I was thinking of getting a newer Asus that would perform better - but their support folks never got back to me with an answer. They sent a few automated acknowledgements of the email I had sent, and at one point said they were routing it to a specific department, but an answer never came. I suppose to them it was a rather strange request that I made. One email did indicate that I could call instead, but in the end I decided to just stick with the CenturyLink model for now. It was not very expensive ($99) and while it is missing some of the routing options I liked from my Asus I have gotten it to work well enough. 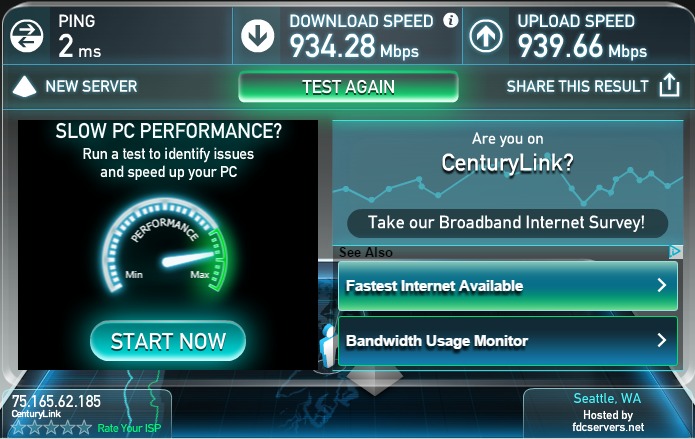 So, now that I’ve had fiber internet for a while - what do I think? Well, it has been rock solid so far; Comcast was not bad, but sometimes we’d have short outages around midnight on their service. I have yet to experience anything like that on fiber. And it is definitely faster, though I haven’t found many places that it really shines. Internet use and streaming video isn’t noticeably different, but uploading videos to YouTube and downloading games / applications is. I have seen speeds up to about half what I am paying for in those situations. I can also stream to Twitch at their maximum settings without issue, which I couldn’t do before. Artificial speed tests show over 900Mbps, though I think in most situations the limiting thing in my performance now is what websites and online services are able to handle on the server-end of things. That is a very nice feeling, but if I had it to do over again I might have just gone for the 100Mbps service level instead. That would still have been an upgrade over cable internet, but the price would have been closer to what I was paying Comcast instead of spending more per month. But the price to speed ratio of the service I have now just seems to good to pass up… even if the rest of the internet can’t really keep up yet :)