Last week I left the sunny confines of southern Utah and drove four hours north to the snowy tundra of Salt Lake City. Well, I was hoping for some snow or at least some cold winter temperatures to prepare me for the ski season. Instead, I was welcomed to town by blue skies and temps in the mid 70s.

I made the trek to Salt Lake City to attend the Supercomputing conference. I've attended conferences both large and small going back 20 years, but nothing could prepare me for what I saw at Supercomputing. If you're not familiar with Supercomputing, it's an annual conference where scientists, researchers, and engineers gather to discuss high-performance computing, network storage and related technologies. I spent three days touring the exhibit hall. What I saw was often mind-boggling and sometimes confusing. I was glad I had Dr. Kinghorn with me to kindly explain HPC terminology to me.

Most of my time was spent sitting through presentations. Red Hat was there talking about how decoupling the storage hardware from the software was a good thing. Storage is a major concern for those in the HPC space, and a number storage companies such as Western Digital and Seagate were present to show off their latest storage appliances.

The exhibit hall was a mix of big and small companies, many of which I didn't recognize. I spent most of my time going between presentations at Intel and NVIDIA. Booth after booth was crammed full of servers and storage arrays and all sorts of networking gear. I saw a server that held one thousand M.2 drives. Another (below) was cooled with Novec liquid from 3M. 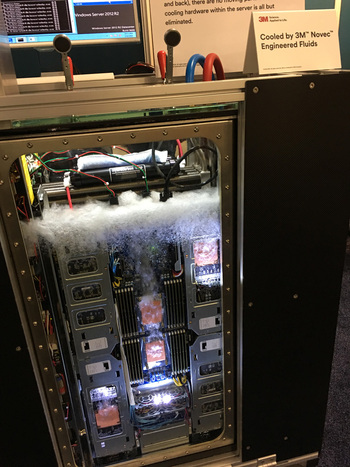 I wanted to share two presentations that have been on my mind since last week.

The first presentation was given by a student attending Stanford University. She explained how machine learning is changing healthcare at a rapid pace. She explained how machines are able to read x-rays to detect cancer cells. Early detection drastically increases the effectiveness of treatment and the patient's chance of survival, and machines can be trained to recognize even miniscule changes from one day's chart to the next.

Near the end of the presentation, one man raised his hand and asked if she was referring to "pie in the sky" technology or products that were available today. Her reply: "This technology is saving lives today."

The next presentation was about how machine learning is helping usher in changes to transportation such as self-driving cars. This really hit home with me because my mother has suffered four strokes over the past six years. Each stroke has done a little more damage than the previous one to the point where her memory is quite poor. Due to that and other factors, she's not able to drive which means she doesn't leave home very often.

I don't know if my mom will live long enough to summon a car to take her to grocery store or to visit her children. I suspect she won't. The technology exists today, but faces regulation and cultural hurdles before anyone can use it. Until that time, I'm glad FaceTime exists which allows her to interact with her grandchildren.

Supercomputing offers a glimpse into the future. That future is full of big technology bets. Bets on chips and storage and software. But it's also full of advancements of a more personal nature. These advances save lives and improve day-to-day living for people like my mom. That's what I'll remember most about Supercomputing 2016.