Windows and I go back a lot of years together. Too many to count, but let's just say my first PC gave me the choice to login to Windows 3.11 or MS-DOS. While our relationship has been mostly great (XP, 7), it's also been bumpy (ME, Vista) at times. But I've stuck with Windows as my primary computing platform because it's versatile, familiar and supports the programs I rely on each day.

This last week you released the Creator's Update for Windows 10. With that update you ushered in a feature I've wanted for many years: Game Mode. This allows users to prioritize CPU and GPU resources for a game while reducing background tasks. I've wanted something like this for a lot of years, and not just for games but for when I'm editing video or batch processing a folder of images.

So this last update to Windows 10 gives me hope that you're listening to your customers. With that in mind, here are a few things I'd love to see in future versions of Windows:

Bare Bones Windows - Put Windows 10 on the South Beach Diet and then give me a Windows without a single application. No mail, map, phone, messaging, photos, OneDrive, Sticky Notes, Voice Recorder, Cortana...you get the picture. I know you're going to tell me that some apps like the Edge browser are required to make Windows work properly. I'll play along with that, but you should know its first and only order of business will be to download Chrome. Why do I want a bare bones Windows? Because I want the absolute fastest balls to the wall version of Windows I can get! Removing all the extra baggage around Windows should also make it more reliable. I want the BMW E46 M3 CSL (no electric seats, AC or radio) version of Windows. Is that too much to ask? Also, I'll gladly pay about $100 for it. 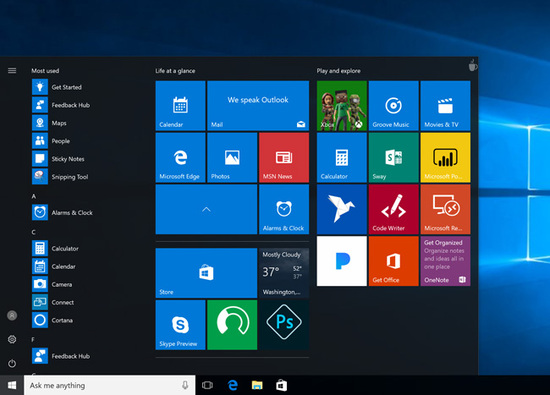 The kitchen sink approach. I can't even.

Dead Simple Backup Tool - I know you've got a few employees running Macs around Redmond. Send one of them on vacation and tell him to leave his MacBook behind. Then open up Time Machine and copy the living daylights out of it. Mock Apple all you want, but they knocked it out of the park with Time Machine. You actually include backup and restore options from Windows 7 in Windows 10 because that's not confusing. No need to reinvent the wheel here. Go forth and deliver a dead simple safety net.

One-Stop Updates - Why do I need to run an NVIDIA service in the background to make sure I get the latest driver for my GeForce 960? I want something that combines Windows Update with FileHippo. But I want it notify me if new drivers for any of my hardware are available. I don't want half a dozen services in the background checking for updates. This will take some teamwork, but I know you can make it happen.

Buy Spotify - Afford me one crackpot recommendation, will you? You need a killer feature that keeps people coming back to Windows, and music could be that feature. Both Apple Music and Google Play Music run well on mobile devices, but leave a lot to be desired on the desktop. Spotify actually has a well-designed desktop app for Windows along with apps for most mobile platforms. Take a chapter out of the Amazon playbook if you must. They include Amazon Prime Video and Music as part of your Prime membership. And if this gets you to charge for Windows, even better.

I could come up with few more recommendations, but I'll stop at four. I want our relationship to work. But you've got to do better than churning out versions that include ads or that call home or that install apps I can't don't want but can't delete. I want a fast and stable platform. One I can leave on for days at a time without rebooting. One that just works.

One last thing: My kids want to know when they can expect to see Halo 6.