Have a problem? Don't Wait! 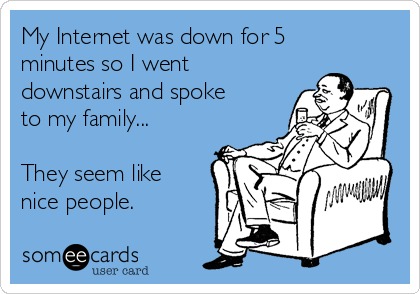 I was recently having some issues with my cable internet and TV. At first, the cable box would periodically freeze and we’d be unable to change the channel. About the same time, the internet would cut out as well too. At first, it was only happening a couple of times a week. Eventually, it started happening a couple times a day. This was over a period of about 2 months. We got to the point of not watching TV with the higher end cable boxes and only using the older one that didn’t rely on Internet. The most frustrating part was the internet going down constantly. Outages ranged from 30 minutes to 3 hours. It was happening more and more frequently. The most frustrating was when it lasted for 6+ hours, and it was only then I finally gave up and called the cable company.

Why did I wait so long? Pride.

I’ve been a tech person all my life. I like to troubleshoot issues to see if I can fix it myself. For the cable TV, I was going to get the old boxes since that seemed to work just fine, so I wasn’t too concerned about it. As for internet, rebooting the cable modem seemed to help at first. I also swapped out cables and used a different cable outlet. No luck. Then, I thought maybe it was the cable modem itself needing to be replaced, so I had a couple spares to swap...an identical backup one and an older generation one. For a while, the older model worked fine but, I was only getting 25% of the speed I should. I figured I’d buy the latest model cable modem and that should resolve everything but before I did, it started to exhibit the same behavior.

I had exhausted all effort. It was time to call the cable company.

The cable tech came the next day and tested my line. Sure enough, I was getting very low signals. He installed a new splitter and amplifier, and I was good to go. It’s been about a month now without a single outage. Turns out  the underground cabling as it ages gets more sensitive to temperature and, as the weather heats up, you can lose signal strength. The tech says they are trying to replace lines as quickly as possible but until then, he gets lots of calls like this.

This got me thinking. I wonder how often our own clients resist the urge to contact our technicians when something isn’t working? Maybe they feel it’s trivial and don’t want to bother us. Or they think they can solve the issue themselves.

Don’t be like me. If I had called right away, this would have been solved immediately and there would not have been two months of mounting frustration. Secondly, as much as we admire you wanting to solve the issue yourself, a better use of your time is to get your work done and leave the troubleshooting to us. Finally, our tech support staff are really nice, knowledgeable, and eager to assist.

So if you have a problem, don’t wait! Give us a call, we’ll be waiting!