In high school, I played SimCity 2000. When I got married, my wife and I were obsessed with Farmville. Those were the only two games that were simulation based that I had ever played. When we had our first born, our second, and then another, our gaming days took a backseat. Real life got real busy.

I might have heard about Animal Crossing in passing, never paying it much heed. A game that has no real ending. You can do whatever you want. Given my limited amount of time, I wanted a beginning, some levels to get through, and an end boss to fight. Who’s got time to go fishing and catching bugs. How could that be fun at all?

Then Covid-19 happened and the world was stuck at home. Our Nintendo Switch had laid dormant for about 2 years. I had originally bought it for my son but he grew tired of playing Mario Odyssey and instead preferred playing on his Xbox 360. Every once in a while we’d resurrect Mario Kart with the family, but otherwise, it just sat there…lonely.

Everyone started talking about Animal Crossing so on a whim, I went ahead and decided to buy it and resurrect that Nintendo Switch. My girls are much older now and figure they might like playing it. My son wasn’t at all interested. Sure enough, my girls loved it. Surprisingly, I found myself enjoying it as well. After playing it for the night, the next day, all I could think about was catching bugs and fishing.

I even Slacked a message to my team members at work warning them:

My girls play it for a different reason than I do. They like to expand and decorate the inside and outside of their house. They are frequent shoppers at Able Sisters, each with a dizzying array of clothing. They like to change their hair color and hairstyle and concentrate on completing DIY projects they want.

In contrast, I just want to make bells, catch rare fish and bugs, and fill the museum. I have expanded my house, but most of the rooms are empty. I prefer it for storage for my turnips or my late night tarantula hunting. My girls play during the day and then when they go to bed, I grab my axe, my shovel, my net, and head off to a mysterious island to start farming tarantulas so I can rack up the bells. 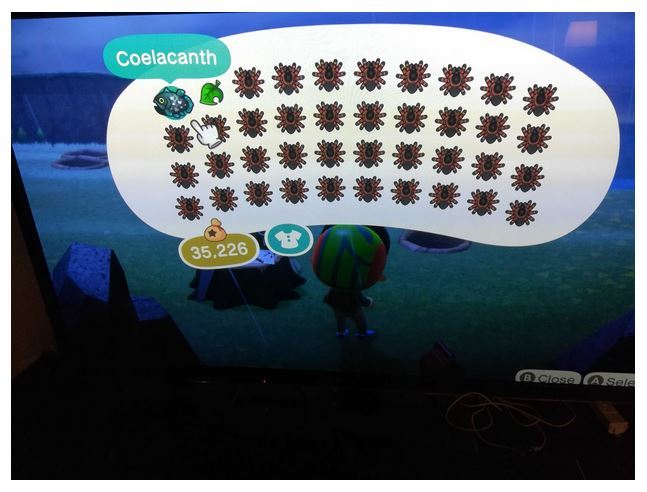 I return to our family island, sell my hunting spoils to Nook’s Cranny and then drop bags of bells onto the front porch of my girls’ house so that in the morning, they will have bells to spend. My wife started playing too and now I drop bags of bells on her porch as well! I’m having a blast playing with my family. I wouldn’t want it any other way.

What do you like to do in Animal Crossing?