“Work is hard enough and it is nice to not have the frustration of the software not responding the way you want it to. My Puget System works seamlessly”

Verrix is a biomedical device startup based in Pasadena, California. Their vision is to “quantify, contain, and manage the health risks of microbial contamination with the fastest and most advanced sterility assurance technology”. Verrix is constantly developing cutting edge technology for mitigating microbial contamination in the medical, food, and pharmaceutical industry, among others.

About the end user: Jenna Zimmerman

Jenna has been working with Verrix since April of 2016. She holds a Bachelor’s degree in Biomedical Engineering from the University of Minnesota and is currently working to achieve her Master’s degree in Mechanical Engineering from UCLA. Jenna has been using SOLIDWORKS since 2011. She started out as a self-taught user but has since achieved formal training by completing Symmetry Solution’s SOLIDWORKS Essentials and Advanced Modeling courses.

Most of the work that Jenna conducts for Verrix Bio is in SOLIDWORKS but said she also uses imaging software like Image J. Since her Puget Systems PC is both her normal workstation and her SOLIDWORKS workhorse, she also tends to use the general suite of Adobe products and Microsoft Office tools as well.

Although the assemblies Jenna creates with SOLIDWORKS are not quite as large as the ones being produced by the Aerospace industry, for example, she still works on rather large projects and needed a system that would get her work done and not be a hinderance.

Prior to purchasing her Puget Systems workstation, Jenna used a Dell laptop attached to a docking station with a dual-monitor setup. She noted that on her previous system, “the resolution was awful” and that “defined lines were incredibly jagged in SOLIDWORKS”. She also noted issues such as response time when rotating parts and assemblies as well as system / fan noise from the Dell she was using

In order to provide optimal performance for SOLIDWORKS, her primary software, we built Jenna a compact core-i7 workstation. The majority of SOLIDWORKS tasks are single threaded (meaning the clock speed of the CPU is more important than the number of cores), but our testing has shown that even the multi-threaded portions of SOLIDWORKS (including simulations) actually perform better on a quad core, high frequency CPU, than they do on even a much more expensive dual CPU or high core count system. So, based on our testing, we were able to configure a system for Jenna that is as fast or perhaps even faster than even the larger, more expensive SOLIDWORKS systems available on the market today - all at a price point that matched her budget needs. In addition to configuring the system with a high performance core-i7 processor, we selected a NVIDIA Quadro card that is optimized for use in SOLIDWORKS. We also configured the system with the perfect amount of RAM to accommodate the medium-large assemblies Jenna works with

Here are a few things that Jenna had to say about her Puget Systems workstation: 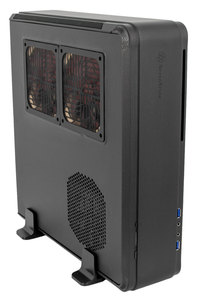 “Flawless response time when selecting features or rotating parts... even in the largest assemblies"

“You don’t hear the background hum of the system fans. Being able to work without distracting noise coming from the computer is an incredible perk."

“No lag time in even the largest assemblies”

Jenna was referred to Puget Systems through her colleague Ned. Ned purchased a system from us while he was attending graduate school. Here is what Ned had to say about why he chose Puget Systems originally and why he has been loyally referring us to those in need of professional workstations ever since.

“I needed a Linux workstation for memory intensive and multi-threaded image reconstruction of microscopy data using SVI Huygens software. The workstation would process data from a new automated microscopy system that was expected to generate very large datasets. It was important that this successfully would do the job out of the box without any drama. Puget's great sales and support helped me choose the right system to handle the workload with reliable hardware to minimize downtime."

Are your needs similar to those of Jenna at Verrix? If so, we can build a system for you.