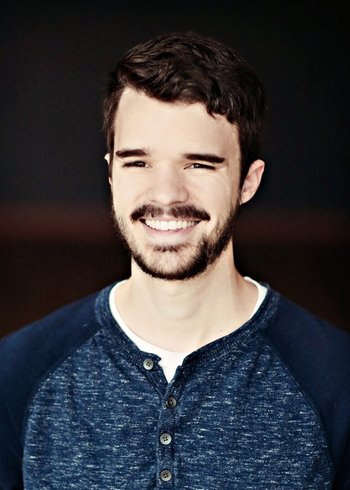 Adam has worked at La Croix Church for about six years, with about a year and a half break in 2018 when he stepped away to pursue his own video production company. He currently works full-time on staff as a Video Producer creating original video content, along with a couple of other staff members. In the video world, his team's main goal right now revolves around livestreaming their Weekend Services, which they started in March in response to COVID-19.

For those services, Adam wanted to create as much of a "distraction-free" and engaging experience as possible, and so lots of work goes into planning and creating that experience. On the original video production side, their goals are to tell real stories about their church and community of Cape Girardeau, to connect with folks and inspire them into action. Adam and his colleagues value excellence so having gear that can produce content quickly and effectively is very important to their organization.

Adam and his team rely on a mix of hardware and software to meet the needs of their congregation. They shoot original content on Sony mirrorless 4K cameras and the livestream on Panasonic broadcast-style cameras. For the livesteam they utilize ProPresenter 7 for all of their graphics and video playback. This setup currently runs on a custom workstation from Puget Systems.

Additionally, they use the newest versions of Premiere Pro, After Effects, and Media Encoder for original video production. The designers run Photoshop and Illustrator across a mix of Mac and PCs. Additionally, they also use a PC running Resolume for their projection on-stage for the livestream.

Adam mentioned that most of his technical issues revolve around troubleshooting hardware. He's owned several computers that abruptly died while in use. Having reliable machines that just work is critical to his organization's success.

Before using workstations from Puget Systems, the workstations for live production and video production were either custom-made by local companies or off-the-shelf computers. On the live production side, they used a Mac Pro that had decent specs. But the video connections available were so loose that any slight bump would cause the signal to drop. On the video production side, the computers were simply too slow for their needs, and would occasionally crash. Reliability and speed were what they needed most when they approached Puget Systems.

We asked Adam if there was anything he was not able to do on the old computers that he wanted to accomplish on his workstations from Puget Systems. He said he wasn't able to do as many reliable video outputs to their ProPresenter machine, but this has been resolved with his new systems.

Utilizing ProPrester 7 and Blackmagic 8K Pro Decklink cards, Adam is now able to do 8 independent dedicated SDI connections, each up to 4K60. He currently runs five SDI outputs at 1080i59.94, but that capability was never possible before using the older computers.

The workstations from Puget Systems not only opened up new possibilities for Adam's team but were able to slice his rendering times in half by using a combination of high-performance Samsung 970 EVO Plus M.2 storage, Intel i9 9900K eight-core CPU, and an NVIDIA GeForce RTX 2060 Super graphics card.

So far, each workstation has been rock-solid. They just work. All in all, we couldn't ask for better reliability!

Adam found Puget Systems through a recommendation from Corridor Digital's channel on YouTube. Seeing how robust their production was, and that they recommended Puget Systems was all Adam needed to hear. In Adam's words, "So far, each workstation has been rock-solid. They just work. All in all, we couldn't ask for better reliability!"