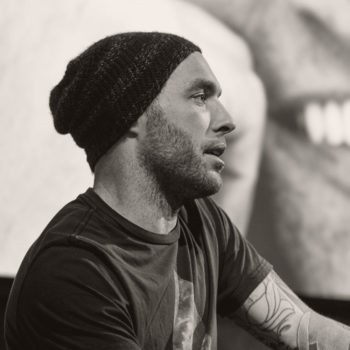 Ash Thorp started ALT Creative, Inc with his spouse several years ago. Their primary reason for starting a company on their own was to assume more control and direction over their creative work and careers. As owners, they can take on projects that allow them to expand their creative efforts while offering a wider range of services to their clients. Their industry connections allow the company to scale and adjust their workforce depending on the size and scale of projects.

Art has been a significant interest and influence in Ash's life since his childhood. He was raised among a family of creative individuals with talents ranging from building to painting to photography. Besides his family, comic books were also an early influence. Ash would spend countless hours scouring over the works of Frank Frazette, Frank Miller, Moebious, Jim Lee, Todd McFarlen, Mike Mignola and many others. His early fascination with comic books eventually evolved into a love of animation and film, and precursor to his eventual career.

Ash was recently involved in the design of the new Batmobile and bikes for the upcoming Batman movie. His love of cars took off when his brother gave him a 1971 Plymouth Valiant when he turned 20 years old. He immediately took to cars and has owned over 20 models of vehicles since then. It wouldn't be long before he was designing and creating cars on a computer.

I have been such a huge fan of the Batman franchise since I was a little boy and to now be involved in this iconic collection is so mind-blowing and hard to put into words.

Ash utilizes multiple applications on both Mac OS and Windows and feels comfortable working on both platforms. He pushes and challenges his workstations to perform at their maximum capacity. He tends to purchase a new workstation every two to three years in order to keep up with the latest technology.

The biggest technical challenge Ash faces is getting his work to look and feel as real as possible. Using his skills and tools, he relentlessly pursues this goal. Each generation brings fresh talent and technology that makes keeping up on the latest products a challenge.

Ash's approach to projects has evolved substantially over the years. For example, when it comes to CGI, not every detail is created equal. Knowing what aspects matter most and then creating a pipeline that is fluid and friendly is critical. The moment things become daunting and taxing during the creative process is when you know you're going down the wrong path. By utilizing applications and workstations that keep pace, Ash is able to focus his efforts on the creative process rather than dealing with IT or component related issues.

When Ash began working with Puget Systems, he mentioned how much stress relief he experienced compared to researching, planning and building his own systems. He no longer had to worry about searching and installing the correct GPU driver or keep his fingers crossed that components will work together in harmony.

Not having to worry about finding the right driver or component or how it may or may not work together, allowed me the peace of mind to just focus my time on creating and doing what I love.

Ash was looking for not just a high-performance and reliable workstation, but he also wanted one that employed the best of both CPU and GPU worlds, allowing him to work faster and more precisely on his projects and workflow. Working with Puget Systems, we met that challenge with a 64-core AMD Threadripper CPU and two NVIDIA GeForce RTX 3090s.

Ash mentioned that a good friend of his recently raved about the quality and performance of his workstation built by Puget Systems. His recommendation came at the perfect time as he was over three years into his current workstation and had begun to look around at a new model. Ash has been running his new workstation now for several months now. He's been pushing it hard with new projects and states it has worked flawlessly and has been as reliable as his friend told him it would be.

As for PC’s, all my previous builds were done either by myself or with the assistance of friends. Therefore, I was so appreciative when Puget Systems was able to help professionally build a PC for my specific needs.