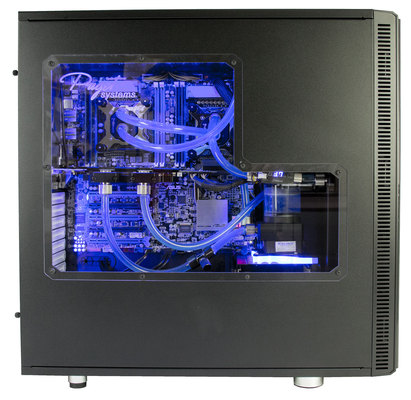 The all new Puget Systems Fractal Design Define XL R2 liquid cooled system is a collaboration between Puget Labs and the Puget Systems production techs who build high quality computer systems every day. There are a number of major improvements in this version:

Improved cooling capacity. This system features 2x 140mm and 2x 120mm total radiator space. With the cooling split more equally into two segments, we can cool the CPUs, then go back through a large radiator before cooling the GPUs, providing each with cool fluid for optimal temperatures. It has been tested with dual 150W Xeons + dual NVIDIA Titans. No problem!

More reliable. We know from experience what causes leaks over the long term. This system has the fewest swivel barbs and o-rings possible. Fewer moving parts means fewer things that can fail!

Quieter. It is much quieter! We are adding a flow meter option to this system because this system is so efficient at removing bubbles (which cause noise as they cavitate) that you actually can't tell if fluid is flowing. Its actually a bit unsettling -- you're used to being able to hear fluid flow. The flow meter will give you a visual indicator the the fluid is flowing. It is recommended only with the windowed version, so that you can see the flow meter without removing the chassis side panel.

More sleek. There is no external blemish on this system. If it weren't for the window, it would appear like a stock Fractal XL chassis. This is the Puget Systems style. We're not gaudy here -- no laser beams, skulls or aliens on our chassis!

Easier maintenance. We've added a fill port to the top of the system. Use the hex wrench to remove the cap, and add more fluid. To drain the system, a drain port is in the lowest part of the loop, right below the reservoir. Easy.

Better visuals. In addition to a more sleek appearance, we've improved the lighting. We've created a custom light mount at the top of the chassis, allowing for an optimal placement of the LED bar to light up your hardware without shadows. The pump is mounted on an acrylic plate. If a lighting kit is selected, we sand the edge of that place and light it up with a "fiber optic" approach, with that same color (as seen in the 2nd picture below).