We have received a lot of praise here at Puget for the time and care we put into proper assembly of our computers! When we assemble each machine, we position each component to minimize heat and increase ventilation! We also take great care to run all the cabling so it does not restrict air flow, and so that it looks great!

For more pictures of builds we've done in the past, check out our featured systems section! 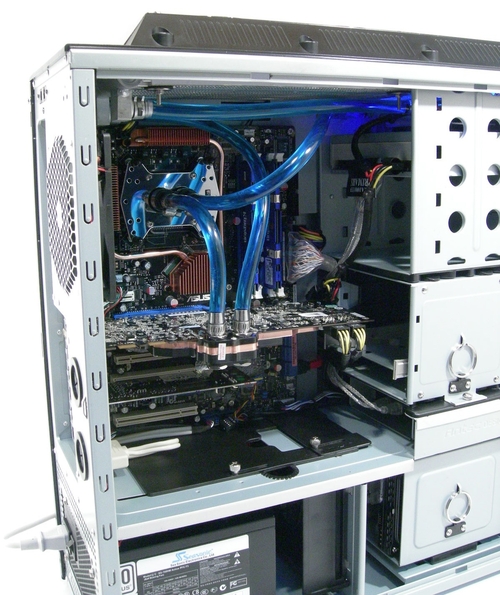 Read what our customers have to say about our assembly and cabling!

"You guys are incredible... The attention to detail is mind-blowing -- careful quality assembly and testing is *everything* for a PC. Everything from part selection, to testing, assembly, thermal imaging, personalized manual composition, cable selection, and shipping... just amazing, and very fairly priced for the service one receives.

I shared all the details of my purchase with my friends.

I just wanted to thank you all!! Puget Systems rocks!!

The system has shipped... I know I will be pleased when it arrives :)."

"I was in need of a powerful Windows machine, but one that was also quiet. I started going down the "build your own" route, but stumbled upon Puget Systems during my research, and was impressed with how readily they answered my questions and their willingness to review a build that would meet my needs. I took the plunge and ordered from them, and could not be happier that I did. This is the best P.C. that I've ever had the pleasure of working on. And it is *sooo* quiet! (My monitor literally makes more noise). I'll definitely be looking to Puget Systems for any future machines!"

"I've purchased my past 3 gaming computers / workstations from Puget and this latest one is the best yet. The 3d modeling / rendering programs I use are running great on this setup, yet this computer is incredibly quiet. I also always appreciate the clean internal layout they do inside the desktop tower."

"I've been using custom PC workstations for film post production & VFX since the early 2000s, and I've always preferred to build them myself for cost savings & flexibility.

When my current studio brought up the idea of purchasing a pre-built workstation to replace our (woefully insufficient) Mac Pro 6,1 color grading system I was hesitant to let someone else assemble a box for me. I wasn't thrilled with the configuration options on many vendor websites, and the cost premium seemed a little high, but our EP wanted to give it a shot with Puget due to their apparent focus on the post production industry.

First, my concerns about flexibility were addressed in about 5 minutes on the phone with Puget: they took my requests, understood why I was making them, and proposed a custom build not available through the online tools which met all my needs, even down to specific wire routing for ease of future upgrades. Really surprised that the first person I spoke with -- in sales no less (not engineering) -- was so knowledgeable about build options and why a customer might want something "off-menu" like I did.

Second, when we got the new workstation it was just as fast as I expected from the parts list, but the big surprises for me have been how stable it is, how well laid out the box is, and more than anything else how *shockingly* quiet the system is even under maximum load. They warned me that with some of my custom requests the sound dampening wouldn't be as effective as stock options, but I don't even know what that means in practice: we have laptops, water-cooled systems, tiny desktop RAIDs, etc -- all of them are louder at idle than this box is under maximum load. Hell, our router is louder than this thing. Really impressive tuning & testing, far better than I've ever done for myself.

In addition to the great build, some 3rd party hardware did not function as expected when we initially received the system -- despite it not being their responsibility they have been responsive and helpful in diagnosing the issues and we've been very happy with support so far. Having struggled with workstation support from Boxx & Dell in the past this was a very pleasant surprise.

I love tinkering with hardware so I intend to continue building my own workstations at home, but for anyone on the fence about buying pre-built, this is the bar for how it's done."

"System arrived early, in pristine condition. The cable work was the best I've ever seen! And the problems I had (which I caused) were swiftly fixed. The customer support is top notch.

Seriously, this is a GREAT experience. Kudos to Puget Systems."

"This is the first one of three video workstations that I've bought in the last 10 years that is acceptably quiet. The other two I've bought from other vendors had fans that ended up sounding like tanks. I did go with the quiet fans and case modifications just to be sure, but it would probably be quiet even without those. Excellent, relevant research articles and advice. Fun to see the 'real-time' progress in assembly and test. Would definitely recommend."

"I am so amazed by this company. I wasn't sure exactly what I wanted and I was able to talk to someone who guided me in the exact computer that I needed. Then after I ordered it, their web site kept me updated to exactly what they were doing during the building stages, and through it all. It didn't take more than just a few business days to have the computer built. Then when they shipped it, it arrived in just 24 hrs. It was tightly package, and had no damage. It is sharp looking and works amazing. I am so excited to get to know my new system. I just got it today in the mail, and it is put together here in america. Thank you to Puget Custom Computers!"

"Very positive purchasing experience. I went back on forth via email with a single person who understood my questions and provided thoughtful answers and suggestions (most of which would lower the price of the computer). As an example of the kind of customer service they provide, they offered to pre-wire the machine for an additional hard or have me mail it in to them to install with the build (they offered to same for my old sound card). I went with the pre-wire for the hard drive and it was done neatly and in a way that was very easy for me to access and plop my hard drive in. They sent a good amount of documentation including helpful tips on setting up the computer and a usb recovery drive. What is clear from my experience is that they really try to go the extra mile and I have nothing but positive things to say."

Not everything that you buy lasts. Sometimes that's okay. The batteries in your TV remote won't last long. But when you really spend on something, you'd prefer to benefit from it for years to come.

Puget systems are built to last. The assembly, quality control, and attention to detail (among other things) are to thank. When you purchase a computer from Puget, one of the checkpoints is literally "Clean any smudges from the chassis". C'mon. Buy from Puget."

"I am completely astounded with how amazing this company is. While I found my computer to be a tad bit pricey, I am never buying from a different computer company again. And I would recommend this company to anyone in a heartbeat.

Not only are their products top quality, but their workmanship is wonderful. My computer is wonderfully build and runs so smoothly. Its more than I could have asked for.

Also they have the best customer service I have ever seen. As someone who has always gone with big name computer companies like Dell and Toshiba previously, I DREADED contacting customer support. So far with my two times contacting Puget customer support, they have been quick, knowledgeable, sincere, nice, and treats you like a normal person, not someone who doesn't even know what a computer is (however they still make everything understandable to everyone).

I can not stress enough that you should buy from Puget systems if you want a seriously high quality computer from a seriously amazing company."