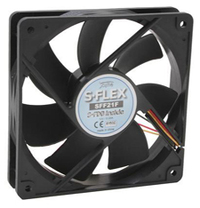 The number one killer of computer hardware is heat. If your system is constantly hotter than it should be, it's going to wear out your computer, and it will eventually fail. So let's address the ways to keep your system cool.

Any case you buy should have a number of fans in it. Some only have one at the rear, while others will also have an intake fan in the front. This will provide a constant stream of cool air from the front of the case, over the hot components, and out the rear. Higher quality cases come with 90mm or 120mm fans, while mainstream cases typically come with 80mm fans.

One of the hottest places in your computer is the CPU, and it's cooled with a heat sink and fan. The Heat Sink is a metal attachment to the processor which helps disperse the heat, usually using copper or another highly conductive metal. This heat sink is cooled with a fan, which keeps cool air moving past it. This makes the CPU heatsink and fan a very important selection when building a system. You want a fan that will keep your processor nice and cool, but you don't want it to sound like a tiny hurricane inside your computer either.

There are a lot of after-market cooling solutions for other parts of the system. They make RAM coolers, hard drive coolers, blower fans, and every other sort of noisy fan-based gadgetry. In general, if you have selected a smart case with good air movement, you won't need these extra fans.

One of the more popular alternative cooling solutions is Liquid Cooling. This works much like the radiator in your car. Cooling Liquid (mostly water), is held in a reservoir, and pumped through tubes to all the hot part of the systems. Eventually, the water is passed through a radiator, which has several fans cooling it.

The advantage of liquid cooling is that it can give you very stable, low temperatures. If you have extremely hot hardware, and are looking to keep it quiet and cool, liquid cooling is a terrific solution. The drawback is that liquid cooling is very expensive, hard to set up, and it makes upgrading your own system very difficult. Any major upgrades require you to drain the fluid from the system, replace the hardware, and often re-tube the whole thing.

It's not easy for me to give you a recipe for the perfect CPU fan. Small fans tend to be light, but are often very noisy or don't keep the CPU cool enough. Larger fans are great at cooling, and often very low-noise, but can be heavy and dangerous to ship over long distances. When selecting a CPU fan, it's a good idea to do a little research, and read the consumer reviews on a website such as www.newegg.com.

Very few systems actually need Liquid Cooling. Even shopping for a quiet system, most of those goals can be reached with a good air cooling system. Even high-speed video cards and hard drives have some quieting options available for them. Liquid Cooling is really designed for enthusiasts who might have a hard time keeping the system stable under maximum performance load.

High Speed Hard Drives can also get quite hot. Check your case spec's, and make sure the hard drives are located near a fan, which will keep them operating at acceptable temperatures. Again, a quality case selection is key to an efficient cooling system.

There's a lot to keep in mind when selecting a good cooling system.

Quiet computers are something we specialize in at Puget Custom Computers. We pay special attention to the combination of hardware, cases, power supplies, video card coolers, CPU coolers, and case fans. If you're really interested in quiet computing, Silent PC Review has a great primer here: Noise in Computing. That site has fantastic recommendations on contemporary quiet hardware.

My recommendations: Invest in a good case, and a high-quality CPU fan. Unless you're designing an extremely high-end system, those two things should keep your system plenty cool.