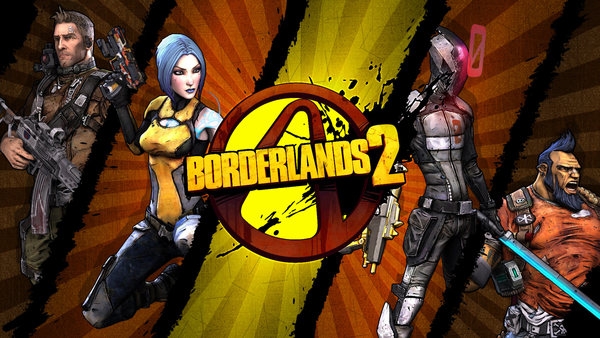 Set five years after the events of the first Borderlands, a man named Handsome Jack has claimed the wealth of the Vault and used it to take gain dominion over Pandora. To stop his campaign to industrialize the planet and exterminate the existing colonist population, you (playing as a treasure hunter) must choose one of four classes to stop him.

The game includes many of the features associated with the original Borderlands; from the cell-shaded art style to the apocalyptic landscape with a huge number of weapons and upgrades to find. At launch there will be four classes (one additional class is already planned to be released a few months after launch) each with skill trees that allow you to upgrade and customize your character to fit your individual play style.

To start this article off, let's take a look at the minimum and recommended system requirements for Borderlands 2:


The minimum specifications are pretty tame, but don't expect to run the game at anything other than low settings with hardware that only meets the minimum specifications. For the recommended specifications, the largest limiting factor for most users will be their video card as the recommended cards at the medium/high end of the spectrum. NVIDIA has published a graph showing a sampling of video cards and their expected performance, but only two of the seven the video cards benchmarked are current generation cards. 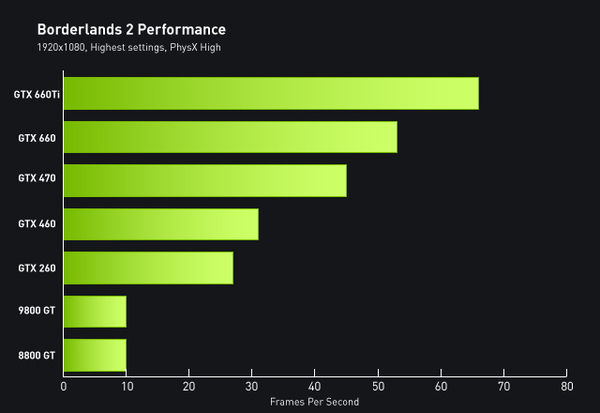 Since our computers utilize the current generation of cards, we are going to focus on current generation NVIDIA and AMD cards to get a good look at exactly what performance you can expect if you purchase a Puget Systems Deluge computer.


For each benchmark run, we ran the game at 1920x1080 resolution since that is a very standard resolution for gaming, but changed most of the other video settings to the following:


Since Borderlands 2 does not have a built-in benchmarking feature, we had to find a place within the game that had a good combination of action (including explosions and PhysX objects), view distance, and consistency. Luckily, near the very beginning of the game has an almost perfect location that allowed us to perform very consistent 4 minute benchmark runs.

Since each run was done manually, there are some slight variations between runs, but overall we were very happy with the consistency in our results. Our method was to set a specific time that we were allowed to stay at each location, and whether or not all the bad guys were killed moved immediately to the next location once that time expired. If we managed to kill all the bad guys before the time expired, we faked continuing fighting by shooting at random and PhysX enhanced objects. We also made sure to use an explosive weapon, as the additional effects associated with the multiple small explosions should put a little bit more load on the system.

Below is a example video of one of our test runs. Specific times to note are:


While 30 FPS is generally deemed the minimum acceptable performance for gaming, we like to use 40 FPS when benchmarking as it gives a little bit of leeway in case there is heavier action later in the game. Using 40 FPS as our cutoff, we found that the NVIDIA GTX 650 and AMD Radeon HD 7750 are both just barely able to run Borderlands 2 on low settings at 1920x1080.

One specific thing to take note of is the relatively poor performance of the AMD Radeon cards. This is almost exclusively due to the use of the PhysX engine which is owned by NVIDIA and utilizes the CUDA cores found on NVIDIA cards. More information on this in the later section: AMD and PhysX Caveat


Once again using 40 FPS as our cutoff, we found that all of the cards we tested were easily able to run the game on low settings at 1920x1080. In fact, many are literally off the charts getting at times above 250 FPS. For the sake of scale, we opted to not resize the charts (seriously, do you really need to see exactly how much higher than 250 FPS the game was running at?)

On high, the NVIDIA cards again all passed, but neither of the AMD cards. Once again, this is almost exclusively due to the use of the PhysX engine which takes advantage of the CUDA cores found on NVIDIA cards.

PhysX is a physics engine that takes advantage of CUDA-enabled video cards (NVIDIA Geforce) to offload physics calculations from the CPU to the GPU. Video cards are very good at these types of calculations, so this allows the game to run much smoother overall even though a heavier load is being put on the GPU.

Since PhysX uses CUDA cores that are only found on NVIDIA cards, it is completely to be expected that AMD video cards do not do well with PhysX. The result is the poor performance we saw by the AMD video cards when PhysX was turned up to medium or high. We could have left it on low for our testing, but we consider PhysX to be a major part of Borderlands 2. For a good look at an example of what PhysX does in Borderlands 2, we suggest checking out the video from NVIDIA below:

Clearly, PhysX use is a big part of the visuals in Borderlands 2. For those that either already own an AMD video card and not looking to upgrade, or for whatever reason would rather have an AMD video card over NVIDIA, we suggest keeping PhysX on low no matter what video card model you have.

With everything on high except for PhysX, the result is a 2-3X increase in the average FPS, and a 2.5-3.5X increase in the minimum FPS on AMD video cards. This is a huge increase and clearly shows that if you do not need/want PhysX, AMD cards will actually perform much better than our previous testing showed. 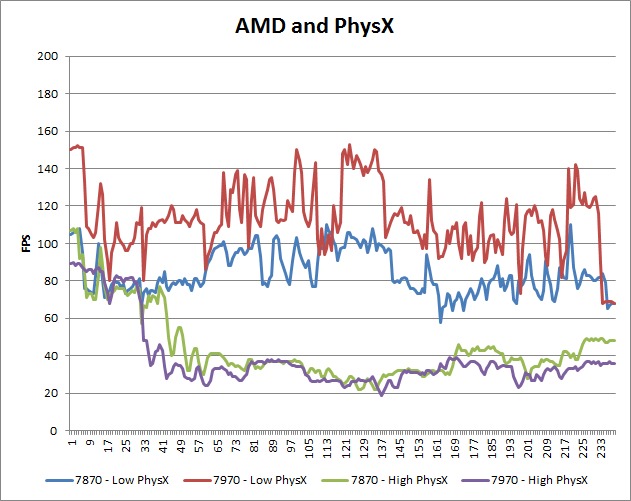 In conclusion, the Puget Systems' Deluge line of computers is more than powerful enough to handle Borderlands 2. Of course, depending on the hardware you choose, you will be able to play the game at a range of settings. In order to play at the highest settings at 1920x1080 resolution, we recommend at least using an NVIDIA Geforce GTX 660 Ti. Due to the heavy use of PhysX, we advise on avoiding AMD video cards for Borderlands 2 as PhysX is not at all optimized for AMD GPUs.