Always look at the date when you read a hardware article. Some of the content in this article is most likely out of date, as it was written on August 1, 2013. For newer information, see our more recent articles.

Since most of these laptops feature NVIDIA Optimus technology, they will switch between using the Intel graphics found on the CPU and the NVIDIA graphics card depending on the amount of graphical power needed. This feature is intended to extend battery life in light load situations by switching the power-hungry NVIDIA GPU to low power mode when it is not needed, and using the more power efficient Intel graphics instead. This does, however, make measuring the battery life a bit more difficult since we will need to run the units at various levels of graphical load to test the battery life with both the Intel and NVIDIA graphics.

To accomplish this, we first simulated a light workload with the screen operating at 75% brightness. This will cover very light tasks such as browsing the web or word processing which utilize the Intel graphics. Next, we looped a 1080p video to see how long the battery lasts when watching movies. The Intel graphics has plenty of power for video playback, so this test also uses the Intel graphics. Finally, we ran Unigine Heaven Pro 4.0 with the settings optimized for the unit to find the battery life while gaming. For this test, the V and M-series units switch to the NVIDIA graphics, so we expect the battery life to take a pretty big hit due to the higher power draw of the NVIDIA GPU. 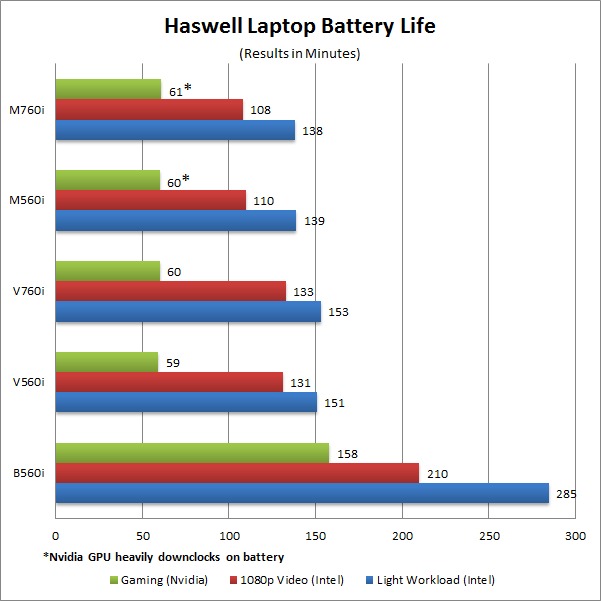 Once again, we want to stress that our battery life measurements are taken in very real-world situations so they cannot be directly compared to battery life expectancies published by various manufactures. In our opinion, these real-world tests are much more useful!

One of the first things that jumped out in our testing was how great the B560i's battery life is. Over four hours of battery life while performing light tasks and over three hours while watching a movie is excellent for a modern laptop. So if battery life is your first concern, the B560i is a great choice.

Most of our results are straight-forward, but for the gaming tests our results are muddied by the fact that the discrete NVIDIA GPU in the M-series laptops does not run at full speed when the unit is not plugged in. This is due to the simple fact that the GPU draws so much power that current battery technology can not accommodate the power draw without being overly bulky. For this reason, the battery life appears to be similar to the V-series even though the GPU is supposed to be much more powerful. In our testing we found that the gaming performance is still better on the M-series units even with this throttling, but only by about 10% (as opposed to the normal 30% better gaming performance over the V-series). So if you often game or perform other GPU intensive tasks while on battery, keep in mind that the V-series has nearly the same performance as the M-series but is much cheaper and compact.

At the 15" and 17" screen sizes, the V-series had slightly better battery life than the M-series with the exception of the skewed gaming results. What is interesting is that unlike previous models, the screen size does not appear to make much of a difference to the battery life. The 15 and 17 inch models of both the V and M-series are within minutes of each other, which is well within our margin of error. This is great as it means that you do not need to worry about giving up battery life in exchange for a larger screen.

Is the illuminated keyboard feature compatible with various flavors of Linux? (I am thinking Ubuntu/Debian)

Sorry for the bit of a late reply, but I just checked with a laptop we have in production and the illuminated keyboard work, but it is completely non-configurable. So if you want a blue backlit keyboard, you're good to go. If you want to change the color, change the brightness, or even turn it off however, you will need to have Windows and the hotkey software installed.