In this article, we will take a look at how LCD techonlogy has advanced recently. We'll also compare some of the latest large LCD monitors designed for movie-watching, gaming, and high-resolution graphics.

First off, it should be said that there are a few relatively minor areas in which CRT technology still has some clear advantages. One of these areas of advantage is color precision - CRT technology is not limited by the color of the fluorescent backlight, like LCDs are. Another area in which the CRT still dominates is the ability to switch between multiple resolutions without sacrificing image quality. The reason for that is, with a CRT, pixels are not a fixed size: they can be enlarged or reduced as needed to support lower or higher resolutions. With an LCD, each dot on the screen is actually a physical LCD pixel rather than the stream of electrons that CRT technology uses to draw a pixel. This makes it problematic to run an LCD at lower than it's native resolution. Most LCD monitor manufacturers have included circuitry which will automatically stretch lower resolutions to fit the full screen, using multiple LCD pixels to represent one pixel that is sent to the monitor. This method results in markedly decreased image quality compared to when the LCD is running at it's actual (native) resolution. Regardless, for most people these are very minor issues compared to the advantages that LCDs offer.

In the past year, available LCD technology has really matured. An average CRT can't compete in terms of image clarity, eye strain, and footprint. Even the ghosting issues which plagued early LCD technology are largely gone.

More and more LCDs are shipping now with standard DVI connectors, which allow for a digital signal path all the way from the PC to the screen. Some older LCDs shipped with standard VGA connectors which added inaccuracy because of the digital to analog conversion being done on your video card, and the added digital back to analog conversion being done by the electronics onboard the LCD screen. The older method using the VGA standard created color inaccuracy, as well as screen artifacts in some cases.

LCD screens are much more efficient than their CRT counterparts, which results in less heat being produced by your monitor, and a lower electric bill. Lower power consumption also means that your uninterruptible power supply will last considerably longer with an LCD than a CRT. The liquid crystal technology used in modern LCD screens creates crisper text and clearer-defined edges in graphics when compared to equivalent CRTs.

Lately, we have been seeing some of the fruits of these advances in LCD technology. One of these is the advent of very large, high resolution monitors in target price ranges for not only the professional, but also for the home power user. With CRT technology, large monitors were very prohibitive in both cost and bulk, anything over 24" with a decent resolution was very much a professional monitor, with professional pricing to go along with it. Today, relatively cheap, large LCDs are starting to take the place of both the computer monitor, as well as the television in some people's homes.

Here, I briefly list information a couple of the large LCD screens that stand out from the crowd today. 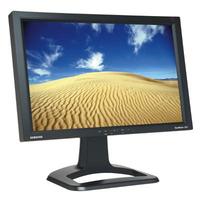 This Samsung model actually can turn horizontally or vertically, which makes it great for reading websites, or doing print layout work. The Samsung is relatively expensive, but makes up for it with amazing brightness and contrast at 300 cd/m2 and 500 : 1 respectively. 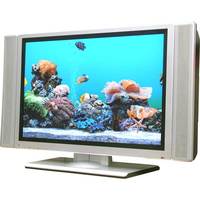 The NX3200 does not have enough resolution to be run for some applications, such as CAD or print layout, but this monitor really shines when being used for movies and gaming. One of the nice things about the CTL Nexus is that it includes DVI, RF, and component video inputs, so you can switch between your computer and television signals easily. CTL also makes 17", 22", and 27" versions (with slight variations on features). Click here for more information. 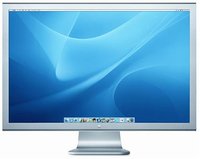 The 30" Apple Cinema LCD is still out of reach for most people's pocketbooks. This monitor, while it can be used as a TV replacement as well (and would look great, I'm sure), is geared more toward tasks that require a higher resolution. The 4 million pixels give ample desktop space for things like print layout, image editing, and CAD design. Apple also sells 20" and 23" models of this monitor, with 1.7 and 2.3 million pixels respectively. Click here for more information.

A look at the future of LCD technology 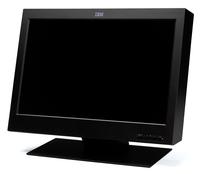 The IBM T221 -- this LCD is an amazing technical achievement. At a native resolution of 3840x2400, with over nine million pixels, the T221 is a glimpse of the future. With over 41,000 pixels per square inch, the T221 allows for unbelievably detailed images. Click here for more information.
Note: One thing that you will want to be sure of when looking to purchase any high resolution LCD screen (higher than 1900x1200), is whether you will need what is referred to as "dual-link DVI" compatibility on your video card. Dual link DVI lets the DVI output on your video card run monitors that require higher than 1900x1200 resolutions. If your monitor requires this, you will most likely need to look into a workstation/professional level graphics card.