With the release of the KT333 (and soon the KT333a) motherboards, we are being introduced to a lot of new features and technology advances. The KT333 motherboards have a lot to offer - onboard USB2.0, onboard firewire, ATA133 hard drive interface, and PC2700 DDR capacity. As we all know, it always costs more to be on the bleeding edge when it comes to technology, so in this article we will take a look at these technology advances to see if they are worth our investment. Specifically, we are looking at the new ATA133 interface and at PC2700 DDR-SDRAM (aka DDR333), but we'll also glance at the other additional features that the KT333 has to offer. 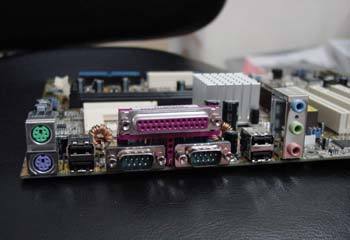 While this article deals mostly with the performance aspect of the KT333, these new motherboards are also equipped with some new features that make it more difficult to make a clear cost vs benefit assessment. Onboard USB2.0 and firewire are very attractive features in a market where high speed external devices are becoming more commonplace. On average, you are looking at an extra $20-$50 to go with a KT333 motherboard over a KT266a model. Since a firewire and USB2.0 purchase would run for at least twice the amount, that makes the decision very easy - the KT333 is a wonderful buy if you need those features. We haven't even started to talk about the specific manufacturer features (Asus' CPU overheating prevention, voice post diagnostics, etc). Needless to say, the KT333 is one of the most advanced and feature-rich implementations that we've seen in a long time, and that makes it very easy to justify the extra $20-$50 investment.

If you are not in need of those features, or if you need more justification for your decision, then the rest of this article is for you. We will begin with ATA133. The name pretty much implies what it is - the same technology as the widely-implemented ATA100 technology, only with a 33% increase in theoretical bandwidth. While ATA100 has a theoretical bandwidth of 100mb/s, ATA133 claims to provide 133mb/s. Notice I say theoretical - we'll get into that later!

First, let's take a look at just why ATA133 even exists. If you take a look at the manufacturer roadmaps from 6-12 months ago, it will be hard to find ATA133 in their planning. What we see instead is a new technology named serial ATA, also known as "firewire inside." This interface was originally planned to take over after ATA100, providing a path all the way up to 6.0 gigabit (300mb/s) throughput. So what happened? The same thing that happens every time a new technology is on the horizon - the new technology is running late! Early projections put the release of serial ATA in 2001. That year came and went. Now what? Now they estimate Q3 of 2002. We'll see. When serial ATA does arrive, it will be big news. Some say that it will be to hard drives what fiber optics was to telecommunications. Other limitations, namely of the PCI bus, make me doubtful of that analogy, but serial ATA will still be a good advancement. 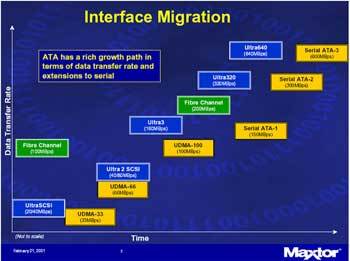 The problem is that our standard ATA100 controllers have a limit that we've hit - they have a capacity limit of 137gb. With 120gb drives now being sold regularly, we're stuck! The limitation is in the data addressing of the interface. The standard ATA100 controllers use 24bit addressing, which limits their accessible range to only 137gb. What we need is 48bit addressing - that will carry us all the way up to 131,072 terabyte capacities! Now, this is not an inherent shortcoming of ATA100. In fact, many controllers have a driver or BIOS update that will update them to 48bit addressing. Some will be sold as "48bit LBA enabled." All this talk of 24bit vs 48bit addressing leads us to the concern that the average consumer will simply be confused by the terminology.

Maxtor has been the first to undertake the simpler solution - the release of ATA133. Not only does this new standard exclusively use the 48bit addressing, reducing the confusion, but it has the additional marketing advantages of being able to claim a 33% bandwidth increase. Pair this up with the fact that the cost of an ATA133 hard drive is roughly equal to that of an ATA100 drive, and it is easy to see that Maxtor has just seized a large part of the mass storage market. Other manufacturers, kicking themselves, are sure to follow suit soon.

The only problem here is that ATA133 does not truly offer a 33% increase in speed! Before I get too far into this point, I just want to be clear that while it is important that the true performance capabilities be known, I do feel that ATA133 is a worthwhile investment. You will be paying only a few dollars (perhaps $5) more than you would for ATA100, and you are putting yourself in a position to be able to upgrade to *much* larger hard drives. At that point, the claimed bandwidth advantage would only be icing on the cake - if it existed. While the interface can be capable of anything it likes, we are still limited by the speed of our hard drives. Today's hard drives can't even saturate the ATA100 interface, so ATA133 does us little good! But while today's hard drives aren't up to the job, the hard drives of tomorrow just might be. We are already seeing more hard drives with 4mb cache, and Western Digital even has a model out with 8mb cache. With this amount of cache, there will definitely be situations in which the ATA interface is the bottleneck. In those conditions, we will see the benefit of ATA133. It won't be much, but it will not be as useless as many skeptical editorials have made it out to be. A good rule of thumb is that if your ATA133 hard drive has 4mb of cache or more, then you could see at least some speed increase with an ATA133 controller. Otherwise, you'll just need to stick with the addressing justification for your purchase!

Even though I have seen plenty of negative reviews of ATA133, the simple fact remains that the technology is needed for a clear upgrade option for people with hard drives larger than 137GB. Regardless of whether or not it can offer an increased bandwidth, we are talking about a nearly non-existent increase in price, and that makes it very difficult for me to find any fault with the technology.

A much more clear-cut feature of the KT333 motherboards is their use of PC2700 DDR-SDRAM. Again, the name alone does a decent job of describing the product - it is simply our old DDR memory as a higher clock rate. While PC2100 ran at 133mhz (2 operations per clock cycle for a DDR266 label), the PC2700 memory runs at 166mhz (for a DDR333 label). With those numbers, we would project a 20% performance increase for DDR333. Does it deliver? Yes, it does. We see a cut and dry bandwidth increase with our DDR333 memory.

As cut and dry as anything can be, there is always "the other issue!" In this case, we look at our CL ratings. The CL rating refers to the "CAS Latency" of the RAM. This number refers to how quickly the RAM can be accessed. A CL rating of 2 means that the RAM can be accessed every 2 clock cycles. Hence, the lower the CAS latency, the faster access you have to your memory. Our familiar DDR266 memory comes in CL 2.5 and 2.0 ratings. When you talk about CL ratings, you're talking about a performance impact that is very comparable to the clock rate. In that case, that means that CL 2.0 memory is roughly 25% faster than CL 2.5. So, our numbers tell us that DDR266 in CL 2.0 has roughly the same bandwidth as DDR333 in CL 2.5. Thankfully, benchmarks confirm this to be true (at last, no more "other issues!"). So which is the better buy? I recommend DDR333. On average, you are going to be paying about 10% more for DDR333 than you would for DDR266. On average, you are going to be paying about 20% more for DDR266 in CL 2.0 than you would for 2.5. That extra 10% can go towards the extra cost of the KT333 motherboard, and there you go! Same performance, and you get more features and technology advances. If you want to really be on the cutting edge, then you can go for the recently released DDR333 in CL 2.0! All DDR memory that Puget Custom Computers sells is CL 2.5, but we can certainly grab some CL 2.0 for you if you ask!

DDR333 memory represents yet another impressive increase in performance for memory. Until its release, the only way to reach those speeds was through the expensive purchase of CL 2.0 memory. At half the upgrade cost, you can now use DDR333 as an alternative, and will have the added benefits of the other KT333 technology and features, plus you have the ability of going even higher and using CL 2.0 DDR333. This new memory is another technology that I have no problem recommending. If you want the performance it can offer, then it is an efficient implementation. 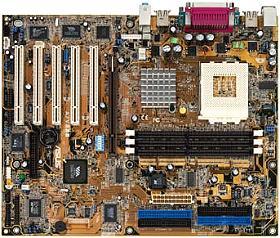 We just looked at the features of the KT333 motherboards one by one - the USB 2.0 and firewire, the ATA133, and the DDR333 - and on each point our conclusion was that the technology was a good investment. To get that same level of performance through expansion cards, CL 2.0 memory, and 48bit LBA enabled hard drive controllers would end up costing you hundreds of dollars more! Unless you absolutely do not need the features, I find it very hard not to recommend the KT333 to anyone who asks. Now, of course, there is always the matter of the tested nature of the hardware. KT266a has been around for a very long time now, and BIOS updates and driver releases have helped it to gain a great deal of stability and dependability over time. KT333 looks in good shape to eventually be in the same position - eventually. For now, it is new technology. Puget Custom Computers has been putting them into our systems for about 3 weeks now, and aside from a few USB 2.0 driver problems and some grounding issues with the Enlight 7237 case, we have not found any problems that would cause us to be reserved in our recommendations. So if you think you can make use of the features, and if the memory performance gains and increase in hard drive capacities sound like something for you, then go for it! We'll be happy to put together a nice system for you!