When you're building a custom computer system for gaming, you have to know your facts. One fact we have for certain is that the video card arena is very messy right now. With a whole new line of video cards from both nVidia and ATI, we now have to take a close look to see where their strengths and weaknesses lie. In this article, we will look at the GeForceFX 5200/5600/5800 line, and the new Radeon 9200/9600/9800 line, and will see what other new technology is next!

For quite some time now, ATI has had one large bragging right over nVidia - their Radeon 9500 and 9700 cards offered full DirectX9 support. DirectX9 offers increased precision with effects, and more pixel and vertex shader support than DirectX8 has. This translates to more realistic scenes in games and better image quality. Even though not many games utilize DirectX9 today, they certainly will in the future, and this support for the future was a big reason to go with ATI. That difference ends with the release of the GeForceFX line. This new line from nVidia not only offers full DirectX9 support, but can handle much more complex shader programs than we've seen in the past, making it quite capable of the same expandability into the next generation of games. 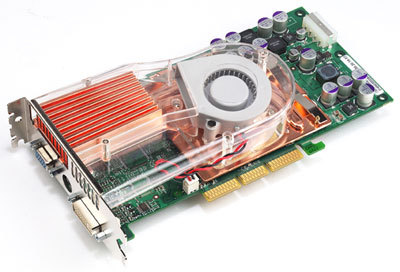 In addition to using much faster DDR-II memory, the GeForceFX cards are also the first of its kind to have their GPU manufactured in the 0.13u process. This simply means that it packs more transistors onto the same size of chip, making it capable of a faster clock speed. Unfortunately, it also means it requires higher power consumption, making it extremely hot. nVidia has addressed this problem with an absolutely enormous cooling unit. Not only does it block your first PCI slot, but it is extremely loud. This issue alone is a huge blow to the line.

How about performance? nVidia has three models - the 5200, 5600 and 5800, built on the NV30 core. Can the 5800 beat out the ATI Radeon 9700? The Radeon 9700 has held the performance lead for a long time now, and what we see with the GeForceFX 5800 is a disappointing performance. Yes, it is able to beat out the Radeon 9700 in a majority of the benchmarks, but not by much. Not enough to justify the $150 difference in price that we see right now, that's for sure. We end our look at the GeForceFX line with disappointment. I see an expensive card, with a very loud cooling system, and marginal performance. Thankfully, the 5600 and 5200 cards are not nearly as expensive, and their reduced performance allows for a much smaller and quieter cooling system. So, if you're looking for the fastest gaming card on the market, GeForceFX built on NV30 doesn't look like the choice for you. Keep reading, though, this story isn't over. A new GeForceFX line built on NV35 has just been released, and it presents a twist to this story. If you're looking for a budget card, the DirectX9 capability in the 5600 and 5200 cards is available for quite cheap, and is a great way to go. 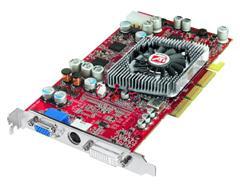 At the same time, ATI has released their new line of Radeon cards built on the R350 core - the 9200, 9600 and 9800. These new models are intended to replace the current 9000, 9500 and 9700 cards based on the R300 core. The new R350 chips not only have an increase in clock speed, but hold revisions to all the technology features that have made the Radeon series so great at gaming. The GPU and memory remain the same, so there isn't a lot to say about the changes in technology. However, since the race between the GeForceFX 5800 and Radeon 9700 was so close, it is no surprise that the Radeon 9800 once again holds the title as the fastest card out there. Reductions in manufacturing costs should eventually translate into a lower price point for these new Radeon models, which will definitely help make them huge competition to nVidia's line.

As we would expect from a competitive and smart company like nVidia, they have identified all the problems in their NV30 line, and have now released NV35 with the GeForceFX 5900. The cooling noise problem has been addressed and the memory bus with has been doubled (removing a major bottleneck). This gives nVidia the boost they needed! When compared to the Radeon 9800, we see close benchmark results, but there is a definite lead taken by the GeForceFX 5900. Both cards certainly have their strengths and weaknesses. While the Radeon 9800 maintains the best image quality, the GeForceFX 5900 has a very clear performance advantage when video memory bandwidth is needed. The 256 bit bus to DDR-II memory is a big strength for nVidia.

So, while nVidia can finally claim the performance lead again, it wasn't without cost. The NV30 GeForceFX line was very disappointing. ATI still has the lead on image quality, and with a new Radeon 9800 coming soon with 256mb of memory, ATI is certainly still in a strong position. This is as close to a "neck and neck" race as I have ever seen by these two graphics giants. I'm excited to see an expectation of a price reduction in the Radeon line, and am happy to finally see DirectX9 support from nVidia. In the past, one major strength that nVidia had over ATI was driver maturity - ATI has a bit of a reputation for buggy drivers. They seem to be quite effectively addressing this problem though, as it has been quite some time since I've run into a driver issue from ATI. So which line should you choose? Look at price, look at your needs. If you don't need the fastest video card, but are looking for the cheapest way to have DirectX9 capability, then the GeForceFX 5200 or 5600 are great options. If you're looking for the best gaming card, you'll get a bit better image quality and quieter operation from ATI, but nVidia holds the performance lead for now.