Earlier this year when the KT333 boards first appeared, I was quite impressed with the long list of features that were previously not commonly seen. Onboard USB2.0, firewire and RAID were very attractive features, and have proven to be very popular. Without question, the Asus A7V333 has been the hottest seller of the year for us. Asus has taken this cue, and has gone even farther with their new boards. Each of the boards in this review feature not only the same USB2.0, firewire and RAID, but they also offer onboard LAN, support for serialATA hard drives (which won't even be available until early next year!) and an 8X AGP interface. 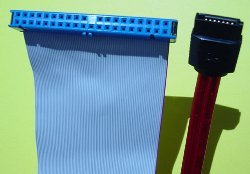 SerialATA is the next generation of IDE interfaces. Earlier this year, when ATA133 came out, our KT333 article on the subject noted that the increase in interface bandwidth was not at all needed, and that ATA133 was nearly entirely hype. Hard drives are simply not fast enough to saturate even the ATA100 interface, so why invest in the development of a faster interface? Such is nearly true this time around. SerialATA, also known as sATA150, is the next step. If it were only an increase in bandwidth, there would be no reason to go out and buy a sATA hard drive, but there is more to the situation this time. SerialATA represents a fundamental change in the ATA interface - a move from parallel to serial signals. This type of serial interface gained a lot of attention with firewire, which is serial in nature. SerialATA is therefore sometimes called "firewire inside," and shares many features. Not only are the cables much smaller and flexible as shown in the picture above, but can reach longer without signal degradation and are even hot pluggable! Just like your digital camera, we will now be able to equip computers with hard drives capable of being removed and replaced on the fly, which should be quite useful for the portable storage market. So while the increased bandwidth is not going to be much more than hype, the new features of serialATA are real and much anticipated!

The other new feature, 8X AGP, is quite similar in nature. Most all video cards today, even high end cards, operate at 4X AGP. Only the ATI Radeon 9700 and a few nVidia cards use the faster 8X interface, but in the case of the nVidia cards, it can be considered entirely a marketing ploy. Don't give 8X AGP too much excitement, but it is definitely a good feature to have to ensure a long upgrade path and the ability to make efficient use of the video cards of the future. 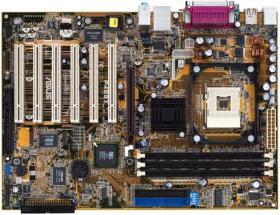 The P4S8X was the first of the boards with these new features, and therefore has received the most attention so far. It uses 533FSB Pentium4 processors and DDR333, just like the P4S533, so its main attractions are in its added features. Unfortunately, this has been the most problematic motherboard that I have ever encountered from Asus. You can imagine my disappointment due to the high regard I have always had for Asus. The first two boards we attempted to use, we could not even get to POST. In the long run, we have found these boards to be more reliable as time goes on, which we attribute to manufacturing improvements as Asus, but there are two lessons we have learned - never put an Audigy card into the third PCI slot, and use nothing but the highest quality RAM available. With an Audigy in the third PCI slot, hard disk corruption is frequent and very difficult to troubleshoot. Memory errors under WindowsXP are very frequent even with our high quality Samsung RAM, and are remedied only by under-clocking the memory or in some cases, increasing the memory voltage. In the end, we have found these series of problem to be something we can overcome, but at the cost of our confidence in Asus. 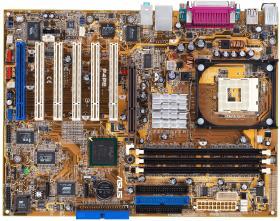 The P4PE is quite similar to the P4S8X, only with a more reputable Intel chipset instead of a SIS chipset. This board promises to be the answer to our problems with the P4S8X. In addition, it offers support for Intel's new hyper threading technology, which will be present starting with their 3.06GHz processors. This technology claims to hold up to 40% increases in efficiency! I have not yet had a chance to work with this board, but I hear nothing but good things about it. We're building our first systems with this board in the coming week, so expect this article to be updated with the results of that experience! 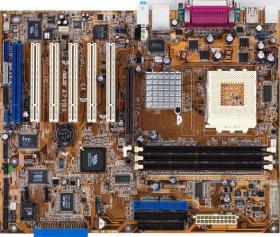 The A7V8X is the next in line to the hugely popular A7V333 board. It is one of Asus' first AMD boards to include onboard LAN, which is a welcome feature. In the days when high speed internet is more and more common, it makes sense to free up a PCI slot by integrating that low-demand function. The features of this board are similar to the others - onboard USB2.0, firewire, LAN, RAID and sound. The main improvements over the A7V333 are the serialATA support and the support for the new DDR400. However, the performance of DDR400 is not as clear-cut as it may seem it should be. Due to operation frequency alone, we would expect DDR400 to be 20% faster than DDR333. The problem lies in the fact that there is no JEDEC specification for DDR400 memory - it is simply hand picked and overclocked DDR333 memory! Due to this shady approach, we see some real performance limitations. First, benchmarks simply do not support a performance increase with DDR400 (it even shows DDR333 to beat it out in a few areas). Second, and most important, a severe limitation is created - the memory will only run at 400MHz when you have a single DIMM slot populated. Put a second stick in, and you're automatically reduced to 333MHz. Put in a third stick and it goes down even further to 266MHz! So, while we do see plenty of reasons to justify the purchase of the A7V8X with all the added features, do not buy this board for the increased memory speed. It just isn't there.

This new line of Asus motherboards offers plenty of new features, but the problems and performance disappointments have definitely tarnished the respect I have always had for Asus. New technology always has its problems at first, and the P4PE is the perfect illustration of "getting it right the second time around." The problems with DDR400 have shown that we're going to have some real problems pushing DDR technology much farther, but there are some new chipsets on the horizon that offer some great solutions. Chipsets that operate the AMD processor at a 166MHz front side bus will finally bring us synchronous operation of the CPU and memory, and dual-DDR memory controllers will be able to operate two DIMMs simultaneously and significantly boost the bandwidth available from DDR333. Clearly, there are plenty of ways that we can see DDR333 implemented more efficiently, and we can't wait to see this new technology when it arrives in January!