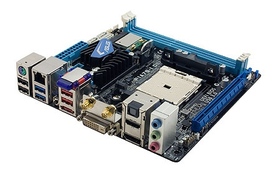 The F1A75-I Deluxe is Asus' first mini-ITX motherboard based on the new AMD A75 platform. With the inclusion of a wireless remote, "BT GO 3.0" functionality and onboard wireless it is clear that Asus is marketing this board primarily for home theater computers. For this reason, we will largely be looking at this motherboard from a home theater point of view and will only utilize onboard graphics and audio.

Before we start looking at the board itself, lets first take a quick look at the manufacturer specifications:

Overall, the motherboard is very similar to many other AMD-based motherboards in Asus' current product line. Both the audio and LAN use Realtek controllers, and use the Radeon HD 6000 graphics chip for the onboard video. This onboard video isn't designed for advanced 3D gaming, but it should work just fine for a home theater or work PC. One thing worth mentioning about the Radeon HD 6000 chip is that while this motherboard has both display port and DVI ports, you can only use one of them at an given time.

Along with the motherboard itself, the following items are included:

Recently, ASUS has stopped including enough SATA cables to match the number of SATA ports on the motherboard, and we're not big fans of this move. For this motherboard, they only provide two cables, yet there are four available ports. At our Puget Systems build facility, we have enough spare cables to cover the difference if need be, but consumers purchasing this as an individual component should be aware that they may need to purchase additional cables.

The remote that comes with this motherboard is a new addition that we have not seen before. In fact, we were unable to find any real information on this remote at all. It isn't listed in the product overview on Asus.com, and does not have any model number listed anywhere. The remote itself if 5"x1.75"x.625" in dimension.

According to the manual, no driver/software installation is needed. Just plug in the USB wireless receiver, let Windows automatically install the driver, sync the remote to the receiver and you're done.


At first glance, the keyboard appears to be in the QWERTY format, but multiple keys are in the wrong location. The "i" and "k" have both been dropped one row, likely due to size constraints. While you can probably get used to it fairly quickly, it is certainly annoying when you first start using it.

The mouse only has two axis of movement, so you can move the cursor up/down or left/right, but cannot move the cursor at an angle. The alternate functions of the buttons on the mouse side can be toggled using the lower-middle button, which is not made clear in the manual.

Asus advertises a range of over 30 feet, but even with direct line of sight, we started to lose signal at around 6 feet. This is after replacing the battery to make sure the battery that came with the unit was not just low.

Overall, the remote is pretty good for something that is included for free, although if you are planning on regularly using a remote-type keyboard and mouse, you may want to invest in one that has better range.

This motherboard, like most mini-ITX motherboards, is very compact. Due to the limited space, we sometimes see headers get moved to really inconvenient locations. On the F1A75-I Deluxe, there are a few oddities, but nothing major.

The USB 2.0 port is the only header that is in a location that may be annoying. While there is probably a very good reason for it, having the header in the middle of the rear ports means that any USB 2.0 cable will have to go clear across the board in order to get plugged in. Ideally, we like to see all the header ports along the bottom of rear side of the motherboard.

The CMOS battery is the only other oddity, largely because Asus decided to have the battery upright. This is likely necessary due to the limited space, but we have had problems in the past with loose cables hitting the battery and causing the contacts to pull out from the motherboard. We do like that Asus at least located the battery towards the middle of the motherboard rather than the edge so the likelihood of damage should be somewhat reduced.

Mini-ITX cases tend to be very compact, so one major consideration when choosing a case is the height of the CPU heatsink you are using. Due to the limited amount of slim AMD heatsinks available that will fit on this motherboard, you will largely be limited to using the stock CPU cooler. This means that this board will not fit into ultra-compact cases such as the Antec ISK-100 as the heatsink is simply too tall. While it is tight even in a slightly larger case like the Antec ISK 310-150, it is able to fit without too many issues.

*Update 11/22/2011: We have found that the lower power, 65 watt AMD A-Series CPU's ship with a slightly shorter heatsink that will fit in the Antec ISK-100. The higher power, 100watt CPU's still do not fit into the ISK-100 with the included heatsink, but they also require more power than the integrated PSU can provide. So even if you change the heatsink, those CPU's will still not function well in the Antec ISK-100.

On all new motherboards, we like to at least flash the BIOS and do at least a quick Windows 7 installation to make sure that there are no glaring BIOS/driver problems. Unfortunately, at the time of our testing, Asus.com did not yet list any drivers for this motherboard so we had to use the drivers off the included drivers disc.

The motherboard uses an UEFI BIOS and includes all the normal setup options you would expect in a modern UEFI BIOS. The BIOS also includes OC Profiles (allows you to save multiple BIOS setups) and EZ Flash 2 (for flashing the BIOS). The version on the motherboard was already the same as what was on the disc, but we went ahead and flashed anyway using EZ Flash just to test it.


The OS installation also went smoothly. Windows 7 unfortunately does not have any built-in drivers for the LAN or wireless, so you will need to have at least a copy of these on a USB key or use the driver disc that comes with the motherboard before you can go out and download the latest drivers for this motherboard.

Overall, we had no problems with either the BIOS or the drivers.

Before we start running the programs, lets review the basic system specs and establish a few baseline readings:


As you can see from the CPU and RAM usage, this system provided plenty of power for these home theater applications. While the wattage draw peaked at 75watts during our testing, we know that the system can pull as much as 140watts when under a full load, which for a mini-ITX system is actually a fairly high power draw. Many mini-ITX cases have relatively small power supplies that simply will not be able to provide this amount of power, so this configuration may not be usable in some mini-ITX cases simply due to it's power consumption. Luckily, the wattage ratings for most power supplies can be found on their specifications listings, so it's not diffictult to verify whether or not the PSU you hope to use can provide adequate wattage.

The board includes HDMI, bluetooth and wireless built in, so it would work very well in a home theater system. It only has support for stereo audio through the analog ports, but 5.1 surround sound is supported if you use HDMI or the optical SPDIF. The remote control is a nice touch although anyone who would use it on a regular basis would likely quickly become frustrated with it's lack of range.

Overall, this is a well-rounded motherboard that doesn't skimp on functionality despite it's size.  We had very few issues setting up and using this motherboard, both in the BIOS as well as in Windows. It easily has enough functionality for a home theater or basic workstation computer, although it does lack the raw power necessary for anything more than entry level gaming. If you want to find out more information about mini-ITX motherboards, home theater computers or any other type of computer for your home or office, feel free to email any questions to our Puget Systems team at info@pugetsystems.com.