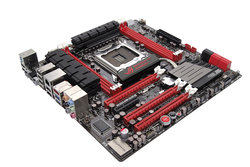 Sandy Bridge-E CPU's have been out for a while now, and we have finally received our first X79 micro ATX motherboard from Asus. The Rampage IV Gene is a part of the ROG (Republic of Gamers) line from Asus which is their flagship line of products. While the ROG series has many overclocking features that only some users will use, we have found that the ROG series excels in systems where high performance and stability is needed.

The manufacture specifications for this motherboard are below:

We will be going over many of these specs later on in this article, but one thing we want to point out now is that this motherboard only supports four sticks of RAM versus the eight sticks present on the ATX versions of the X79 chipset. This limits the maximum memory to 32GB of RAM, but that is still much more than many users will need in the foreseeable future.


On the rear I/O panel, this motherboard has an impressive 8 USB 2.0 ports available along with 2 USB 3.0 ports. It's worth noting that the USB 3.0 ports require a driver to function and will not work in the BIOS; so devices such as keyboards and mice that are needed to make changes to the system's BIOS should always be plugged into the USB 2.0 ports. Internally, there is only a single USB 3.0 header (providing two ports) and 2 USB 2.0 headers (providing 4 ports). This means that this motherboard can provide a total of 12 USB 2.0 ports and 4 USB 3.0 ports. This motherboard does not come with any USB brackets however, so if you want to use any of the internal headers for anything beyond the chassis USB front ports or internal USB devices, you will need to purchase a separate USB bracket.

For the internal SATA connections, there are 3 SATA 3Gb/s (the fourth port is used as the ESATA port) and 2 SATA 6Gb/s ports using the Intel X79 chipset. There are also 2 SATA 6Gb/s ports using the Asmedia controller, but from our testing they are not as good in terms of performance or reliability as the Intel ports. For that reason, we only recommend using the Asmedia ports if you are using a SATA 6GB/s SSD and the Intel X79 SATA 6Gb/s ports are both already in use. For more information on the differences between SATA controllers, we recommend reading our SATA Controller Performance Explored article.

Moving on to the PCI-E slots, here is a list and picture of the slots available on this motherboard:

The first thing to note is that Asus is officially touting the x16 PCI-E slots as being PCI-E 3.0 compliant. PCI-E 3.0 is not officially supported by Intel at this time, so this is not an official Intel X79 chipset feature. There are very few PCI-E 3.0 devices available at the moment, so the PCI-E 3.0 capability is largely only useful to those that want to future-proof their system for future upgrades.

While there are 3 full PCI-E x16 slots, the bottom slot actually only runs at x8 speeds. You may ask why Asus did not make the top and bottom slots run at x16 and have the middle slot run at x8 since if you are running SLI, you want the video cards to be as spaced apart as possible for cooling. The reason Asus went with this configuration is that the majority of micro ATX chassis do not allow for dual width PCI cards to be installed in the bottom slot. So making the bottom slot x16 and the middle slot x8 would limit SLI configurations to single width video cards only.

The power connections are in the standard locations that we have grown accustomed to with the 24-pin ATX power on the right edge of the board and the 8-pin power at the top.

The only "odd" thing on this motherboard is the location of the third SATA 3GB/s port. Since the fourth port is actually the E-SATA port on the rear I/O panel, Asus could not use the same stacked design for the leftover third port. Rather than just removing it completely, they opted to add it to the right of the USB 2.0 headers. The location is actually fine, it just feels odd to have a SATA port sticking out like that when all of the other ports use the space-efficient stack design. Still, we would rather have this port than not, so overall this is a positive thing.

There are two clear CMOS buttons; one on the rear I/O panel and one to the left of the internal USB 2.0 headers. In the rare case the CMOS clear button does not work, the CMOS would need to be removed in order to clear the CMOS. The battery in question is located under the top PCI-E x16 slot and as thus requires you to uninstall your primary GPU (typically installed in the top PCI-E x16 slot) in order to remove the battery. Considering that the clear CMOS switches work 99% of the time however, this is only a minor inconvenience.

Through all of our testing, this motherboard was rock solid. In fact, the only negative thing we can say about this board is that we would like to have seen the Asmedia SATA 6GB/s ports a different color than the Intel SATA 6GB/s ports. It is a very minor detail, but it makes it much easier to be sure that you use the Intel ports first.

With this motherboard, Puget Systems is able to extend our Sandy Bridge-E offerings to include smaller systems using the micro-ATX form factor. Look for update in the near future to include this motherboard in a few of our pre-configured systems.