Over the years, as the thermal output of their CPU's has increased, Intel has released numerous revisions to the stock heatsinks included with their processors. Below is a sample of some of the different coolers Intel has used since the days of Pentium 4:


As you can see, Intel has largely stayed with the same style of heatsink over the years. Starting with the LGA1366 (Core i7) Extreme CPU's however, they began deviating from their standards with the inclusion of heatpipes and horizontal airflow. With the ever increasing thermal output of CPU's, Intel has finally decided that standard heatsinks can no longer adequately cool their high-end CPU's. For this reason, Intel is planning on releasing their new high-end CPU's (codename Sandy Bridge-E) without any included heatsink and has instead developed a completely different cooling solution that will be available for purchase separately.

In addition to a standard heatsink (DRA-A) intended for use with low to mid-range socket 2011 CPU's, Intel has partnered with Asetek to develop a closed-loop liquid cooling solution which they are calling the DRX-B (retail name RTS2011LC). Over the past few years, this type of cooling has become increasingly popular as it performs very well and is decently quiet. In fact, Puget Systems has been using this type of cooling ever since 2007 with the Puget Hydro CL3 as it's latest incarnation.

Specs for the new heatsinks from Intel are as follows:

Overall, the Intel RTS2011LC Liquid Cooling Solution is very similar to other closed-loop liquid coolers on the market. The mounting is fairly robust, offering options for 775, 1155, 1156, 1366, as well as the new 2011 socket. Socket 2011 is a bit different since the socket itself has threaded mounts for the heatink to mount directly without the need for a backplate, but Intel has decided to make this cooler backwards compatible with older sockets. As expected from an Intel-branded heatsink, there are no mounting options for any AMD socket.


One feature we like is that both the pump and fan can both be powered from a single PWM fan header on the motherboard. At first, we took this to mean that the pump speed could be controlled via PWM, but from our testing it is clear that the pump does not ramp at all. It simply runs at full 12v, and passes the PWM signal on to the fan which does ramp.

Before testing the cooler in a full system, we first want to find out exactly how powerful the fan that comes with the Intel RTS2011LC is. This will help us determine if any performance differences are due to just the fan having a higher or lower CFM rating. For this test, we will also include a Scythe Slip Stream 1300RPM 120mm PWM fan and an Antec Tricool 120mm fan on both the low and high settings as an additional point of comparison. We would not normally run an Antec Tricool at different voltages and instead use the low-med-high switch, but these readings will help give us additional data points for our comparisons. 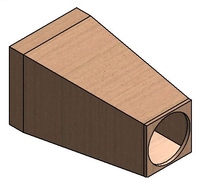 To measure the airflow, we used an anemometer (Extech AN100) with a custom adapter to adapt from our 120mm test fans to the smaller 80mm diameter of the anemometer sensor. The adapter is 200mm long, giving us a smooth, gradual slope from the 120mm side to the 80mm side. Using this type of adapter means that our CFM readings will be nowhere near the manufacturer's specifications which give the airflow in an open-air environment, but should do a good job at giving us comparison readings. It will also be more real-world as a fan installed into a chassis is never going to perform at the manufacture rated open-air CFM levels.

Airflow readings were taken at 5, 7, and 12 volts to simulate multiple levels of fan speeds. 5v will give us roughly the same RPM that most fans will be spinning in an idle system, while 12v will simulate a system under full load. 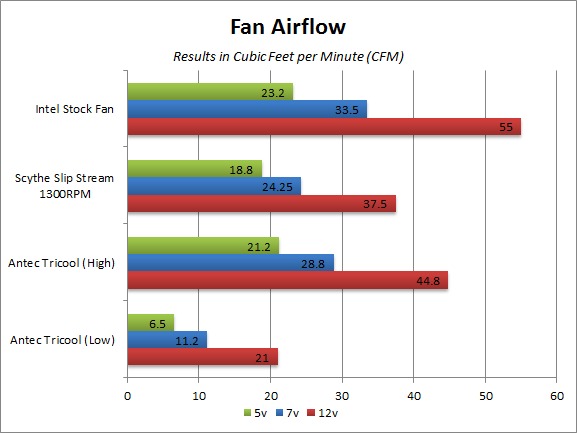 Clearly, the Intel fan moves much more air than either the Scythe or Antec fan with an impressive 55CFM at 12v. Whether this will directly translate to better cooling or not however will have to wait until we install the different coolers into a test system to see how they perform.

For our noise measurements, our dBa meter was placed at a distance of two inches at a 90 degree angle from the fan or the bottom of the pump. This is much closer than dBa readings are normally taken at, but we expect the difference between some of our configurations to be very small so we would rather have slightly exaggerated results. Because of this, our measurements will be in no way comparable to the manufacturer's specifications of noise.

To test the fans, we again ran them at 5, 7, and 12 volts to simulate multiple levels of system load. Our ambient noise level for all of our testing was 29 dBa. 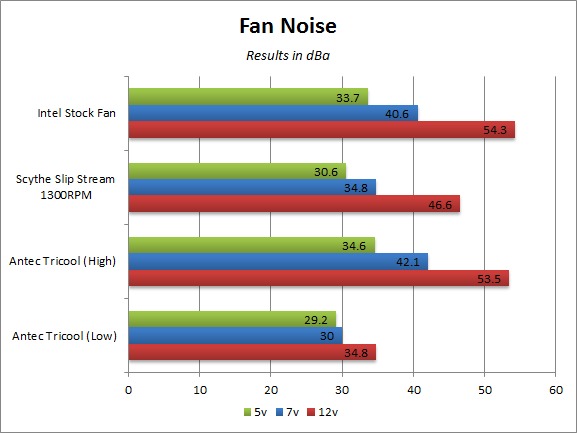 Starting with the fan noise, you can see that while the Intel fan had the highest CFM in our airflow tests, the Antec TriCool fan on high is actually louder when running at both 5 and 7 volts. This suggests that the Intel fan is pretty efficient in the low to mid RPM ranges. The Scythe fan however is much quieter than the Intel and Antec fans coming in ~8 dBa lower at 12 volts and ~3 dBa lower at 5 volts. This indicates that the Scythe fan should be noticeably quieter both at idle and load.

Moving on to the pump noise, we ran both the Intel DRX-B pump as well as a Coolit Eco II pump at 12v as a point of comparison. The Coolit Eco II came in at only 2.4 dBa above ambient, while the Intel DRX-B is a full 6.8 dBa above that. The pump noise will be somewhat lessened by the computer's side panels and the fact that it is located in the very center of the machine, but the variance is large enough that the difference in noise levels will be noticeable as long as the system is in a fairly quiet environment.


To test the thermal performance of these coolers, we recorded the temperature at both idle and load with the hardware listed above. We will be testing the Intel Liquid cooler, a Coolit Eco II, and a Gelid Tranquillo Rev2. We also tested the Intel DRX-B cooler with both the included fan as well as the same fan we use on the Coolit Eco II (Scythe Slip Stream 1300RPM 120mm PWM). 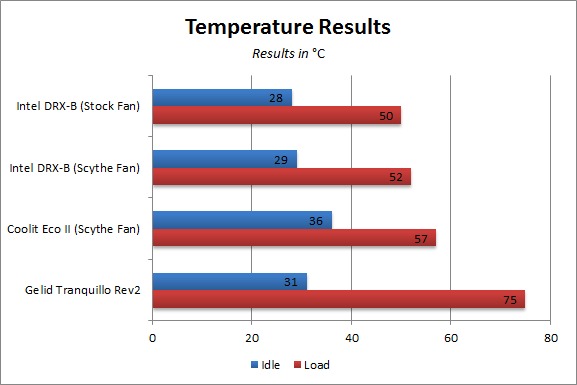 Performance-wise, this new cooler from Intel is excellent, keeping the CPU 7-8° C cooler than the Coolit ECO with the stock fan. Surprisingly, switching the fan to the the lower RPM Scythe Slipstream 1300RPM only resulted in a 1-2° C temperature increase, which still kept it 5-7° C cooler than the Coolit Eco II. Since the Intel fan is much more powerful (up to 17.5CFM more than the Scythe in our testing), this indicated that the Intel DRX-B cooler did not benefit greatly from the extra airflow. The Intel fan is also much louder, so we recommend replacing the fan with a quiet fan if noise is at all a concern, especially since our testing shows that the performance of the cooler will not be largely affected.

What our testing boils down to is that the Intel RTS2011LC liquid cooling solution has great performance, but suffers in regards to the noise levels. The fan is easy enough to replace which would greatly help with the noise problem, but the pump is also much louder than the pump available on the Coolit Eco II. So users that are concerned with noise may want to look into other third-party coolers such as the Coolit Eco II rather than the Intel branded DRX-B. For that reason, Puget Systems will continue to offer the Coolit Eco II cooler as the basis for the Puget Hydro CL3 Liquid Cooling System.