Read this article at https://www.pugetsystems.com/guides/94

UNLISTED on August 9, 2011 by Matt Bach
Always look at the date when you read a hardware article. Some of the content in this article is most likely out of date, as it was written on August 9, 2011. For newer information, see our more recent articles. 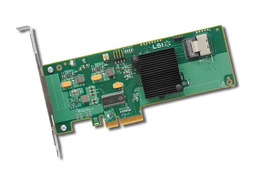 The LSI 9211-4i is a budget-oriented four port RAID card that  supports RAID 0,1 and 10 as well as single drive configurations.  Interestingly, the RAID card by default picks up any connected drives as single disks so there is no extra configuration necessary to use this card as a simple SATA III 6GB/s controller if RAID is not needed. On most RAID cards, you have to either configure the drive as a single disk, or create a single disk RAID 1 to use a single drive alone.

Unfortunately, the model we received does not come with a SAS to SATA breakout cable, so we had to order one separately.  While not a problem for us, it is something to keep in mind if you are ordering this as a part for yourself.

The firmware that came installed on the card was two revisions old, so the very first thing we did with this card was to upgrade it to the lasted available on LSI's website.  The documentation is somewhat confusing and you need to sort though the list of command line switches to figure out which ones you need to update the firmware.  We found it easiest to update the firmware through the command line in Windows using sas2flash.exe which is also available on LSI's website.

Windows 7 includes integrated driver support for this card, so installing that OS to a RAID array on this controller should not be an issue.  You will not need to load a driver during the initial Windows setup, but the integrated drive is somewhat dated so we recommend updating it as soon as the OS is installed.

The Windows software is called MegaRAID and is the same software that Intel RAID cards use (although under a different name).  There are a few cosmetic differences, but the underlying functionality is the same.  From the MegaRAID software you can see the current status of any available RAID arrays, configure RAID and alert settings, review event logs, and delete/create RAID arrays.

One thing we found while creating an array is that this card does not allow you to customize very many settings.  All you are allowed to set is the RAID type (0,1 or 10) and which drives are assigned to the array.  Write cache, stripe size, read policy, IO policy, and more are all greyed out and not configurable.  We understand that this is a budget card, but it was disappointing to find these settings deliberately blocked.

Another issue we found is that anytime you create or delete an array, the software does not update the list of available arrays automatically.  You need to manually refresh the software by selecting "Refresh" from the menu or hitting F5.

Recovery for RAID 1 arrays is fairly straight-forward and works well.  If a drive fails, you just replace the physical drive, and add the new drive to the array through the software.  We also found that if a drive for some reason is not detected due to a loose cable or something similar, the RAID will automatically re-add and update the array when the drive is redetected.

All of our testing was done with the RAID configured as a secondary storage drive and used CrystalDiskMark for benchmarking.  We will be using the 3ware 9650SE (our current budget RAID card) and the Intel RS2BL040 (our current high-end RAID card) as comparisons.  The 3ware card is only SATA II 3GB/s so we expect the performance to be lower than the other two cards as they are both SATA II 6GB/s.  Since it is the product we current carry however, the performance differences between the two is very important to us.

For the hard drives, we will be using the fastest SSD drives we currently offer.  We want to push these RAID cards to their limit and be confident that we are not limited by the hard drive performance.  The specs for the relevant components in our test system are below:

*All results are in MB/s


We expected to see relatively low performance here with the 3ware card since it is only supports SATA II 3GB/s, but we were suprised that the LSI 9211-4i had such low performance on the sequential write testing.  The sequential read is also lower than we would like, but it is better than the 3ware card.  The Intel RS2BL040 blows away everything else however, living up to our expectations of a high-end RAID card.


A RAID 0 array should theoretically have twice the throughput as a single drive.  Looking at the results however shows that this is not always the case.

The 3ware card is certainly showing its limitations, making it clear that the card's performance was already maxed out by using just a single SSD.  The LSI card showed only about a 35% increase in read speeds, but a 57% increase in write speeds.  The read speed however is only barely higher than the onboard Intel controller however, which makes the 35% iincrease in performance versus a single drive less impressive.

The Intel card shows us the potential of having two of these SSD drives in a RAID 0, with almost a GB/s read speeds with a very high write speed to go with it.


Interestingly, the LSI card is the main underperformer in the RIAD 1 benchmarks, not the 3ware card.  What is really interesting is that the benchmark results for the LSI card is almost exactly half of its single drive results.  What this tells us is that this card is not very efficient with RAID 1 arrays.  Rather than writing to both drives at once, it appears to be writing to the first drive, then the second drive after the first drive write is complete.  Due to this, even the older SATA II 3GB/s 3ware card is able to outperform the LSI card.

The Intel card massively outperforms both the other cards, with more than doube the other card's read speeds and just a little under double the write speeds.

Looking at these results, we need to keep in mind that all of the testing was done with a high-end Intel 510 SSD, so many of these results will not directly apply to all RAID configurations.  For example: the Western Digital Blue 500GB SATA 6GB/s hard drive has a max read and write of approximately 100MB/s.  If you wanted to create a RAID 1 with two of these drives, the maximum speed you would expect is the same 100MB/s read and write. Given the benchmark results we saw, you would not see much performance difference between any of the three RAID cards we tested.  This is due to the fact that none of the RAID cards showed performance below 100MB/s, so the hard drive themselves would be the performance bottleneck.  Even if the RAID card is capable of 500MB/s read speeds, that limit doesn't matter if the hard drives max out at 100MB/s.

What this means is that while the LSI 9211-4i RAID card may not be suited for use with high-end SSD's, it should perform just fine with traditional hard drive RAID arrays.  RAID 1 write performance may suffer just a little bit, but overall the card would not be a performance bottleneck.  RAID 0 arrays especially should have great performance, and with speeds high enough that it may make it suitable even for arrays of entry-level SSD drives.