As more and more people discover the benefit of multiple displays, many - especially those using mobile platforms - are beginning to max out the number of displays their system can handle. Most modern video cards will allow for three or more displays, but many laptops only allow for one display in addition to the main laptop screen. This becomes a problem for users that like the mobility afforded by laptops, but also want to use more than one additional display when they are not on the go.

USB displays are one solution to this problem that are been gaining traction recently. But with the USB 2.0 interface, they simply were not fast enough for most users. They were fine for showing simple web pages and graphics, but if you wanted to watch a video or do anything that involved a lot of movement on the screen they would often stutter or lag. With the SIIG USB 3.0 Dual Head Docking Station, we are hoping that these issues will be resolved with the move to the much faster USB 3.0 interface.

This docking station can power two displays (DVI and HDMI), both of which can operate at resolutions up to 2048x1152. It also features gigabit networking, audio in/out, 4x USB 2.0 ports and 2x USB 3.0 ports. This makes it a great docking station for laptops as you can have extra displays, fast wired networking, external speakers, and a keyboard/mouse all available by plugging in a single USB 3.0 cable.

Installation and setup is very easy. Simply download and install the latest drivers from the manufacturer's support website, run Windows Update to catch any updates, and then configure the displays/audio/LAN like you would for a normal internal device. The only issue we ran into when installing the device was that it did not correctly detect on USB 3.0 ports powered by an ASMedia controller. This indicates that older chipsets lacking native USB 3.0 support may have some issues, so if at all possible we recommend using the native Intel/AMD USB ports.

Before we get into exactly how USB displays work, let's first take a look at some numbers so get a feel for exactly how much data it takes to power a display over traditional DVI and HDMI cables:


From this chart, it is clear why USB 2.0 video devices had problems. Trying to fit 5-10 Gbps of data through a 480 Mbps connection was simply too much. With the 5.0 Gbps speed of USB 3.0, however, it is possible with a little ingenuity.

The majority of USB displays are based on DisplayLink technology, which has been in development since 2006. DisplayLink's website has great information on USB displays, but the most relevant page for this article is their Technology Overview which explains how USB displays work. In a nutshell, they utilize the CPU and GPU to process what needs to change on the display, which is then compressed using DisplayLink's DL2+ or DL3 compression technology and sent to the USB display. This information is then uncompressed by the docking station (or other USB display device), and used to update the display. Unlike traditional displays, USB displays only update the portion of the screen that has changed rather than constantly updating the entire screen.

By doing the majority of the computing on the CPU and GPU, the USB display (or in this case docking station) only needs to have the hardware necessary to uncompress the data, rather than the hardware to fully process the graphical information. This reduces costs, and is what allows what is normally as much as 10.2 Gbps of data to be sent over a 5.0 Gbps USB 3.0 connection.

This method works very well, but there are a few drawbacks. First, it puts the CPU under a heavier load than normal so if your CPU is not powerful enough the USB display may not be smooth. Second, even with the compression it is theoretically possible to "overload" the USB 3.0 interface by trying to pass too much data through it. This would typically manifest itself through the display stuttering or lagging. Unless you are copying files to/from a super-fast USB 3.0 device, however, it is unlikely that the USB 3.0 bus will be fully saturated in everyday use. In fact, in DisplayLink's Common Questions page, they claim that you can use up to 6 USB displays at once without saturating the USB bus.

In this section, we are going to look at how much load is put on the CPU when running one or two additional displays. In our testing, we will be using a Puget Traverse 15 inch Notebook w/GT 650M with an Intel Core i7 Mobile 3720QM 2.6GHz CPU and 2x Kingston SODIMM DDR3-1600 8GB RAM. To connect to the video ports on the docking station we used a pair of Asus VW246H 24 Inch LCD Monitors. All of the displays (include the integrated laptop display) were set to a resolution of 1920x1080.

Older reviews of USB 2.0 display adapters such as Tom's Hardware's review of USB Monitors included CPU load readings for things as simple as the system idling (with and without a webpage/document open on the screen), moving the mouse cursor, or dragging a window across the screen. We are not going to include readings for these actions because, in our testing, none of those actions raised the CPU load above 0%. This is great news to start with since already we can see that this device is much more efficient than previous generation devices.

To test how much CPU power it takes to run one or two displays through the SIIG USB 3.0 Dual Head Docking Station, we played a 1080p video and ran a round of the Unigine Heaven 3.0 benchmark using both the primary laptop display and the USB DVI display. We also played long 1080p Youtube videos (to make sure Youtube was constantly buffering) using the LAN on the docking station on the primary display, USB display, primary + USB display, as well as on all three displays at once. This will let us test the USB displays under a variety of conditions and allow us to determine how much extra load is put on the CPU when using a single USB display. Also, by using the docking station's LAN during the Youtube testing, we will also be testing to see how the docking station performs when multiple aspects of it are in use at once. 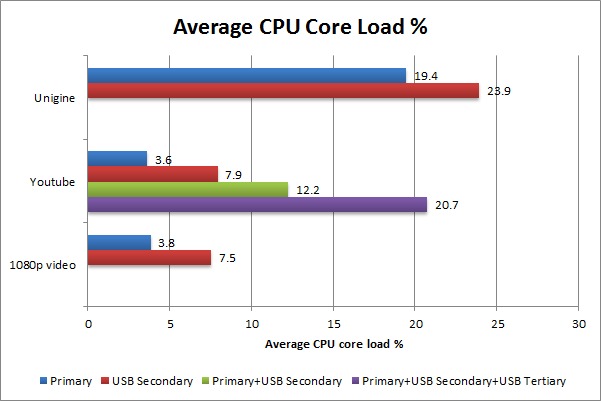 As you can see, using the USB displays certainly adds to the load on the CPU, but not by as much as we expected. Playing a movie or game on the USB display adds about 4.5% to the CPU load on our Intel 3720QM. During our Youtube testing, it appears that this 4.5% number is also a pretty accurate measurement for how much additional load is put on the CPU for each USB display.

What was also surprising to us was that the Unigine Heaven 3.0 benchmark scores on the primary display and the USB DVI display were virtually identical (38.4 vs. 38.0 FPS). This suggests that as long as you have the CPU power to spare, you could do something even as intense as gaming on a USB display and have it run just as well as if you were using the ports from your video card.

After completing our testing, we were very impressed with the SIIG USB 3.0 Dual Head Docking Station. Once we had the drivers updated, we did not notice any stuttering or lagging on the USB 3.0 display during our testing and it was smooth enough to comfortably watch a movie. We did have a few seconds of minor video artifacting if we moved the movie between the primary laptop display and one of the USB displays, but overall the experience was great.

Even playing three 1080p Youtube videos at once (all three of which were buffering over the docking station's LAN port) did not result in the CPU load rising above 25%. While the CPU in our test laptop is fairly powerful by mobile CPU standards, this shows that even a lower-end CPU like the Intel Core i5 3320M should be able to power USB displays without much trouble. Still, if you plan on doing anything that requires a decent amount of CPU power, you will likely want to invest in one of the more powerful CPUs to ensure that the USB displays do not stutter or lag. 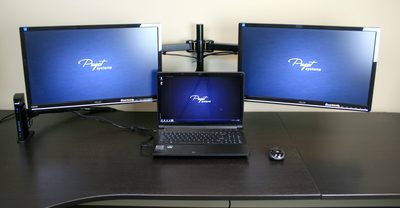 Overall, this is a great unit for those that need an easy way to add additional displays to their system. While most desktop computers would likely be better off adding an additional cheap video card to their system, the SIIG USB 3.0 Dual Head Docking Station is great for laptops or other small form factor systems where additional video cards are simply not possible. The additional USB, audio, and LAN ports make it even more attractive for laptops since it allows you to connect the laptop to various devices through a single USB 3.0 cable.

Not everything about this docking station is perfect, however. We had problems getting the docking station to work on ASMedia USB 3.0 ports, which indicates that older chipsets lacking native USB 3.0 support may have some issues. Another issue we ran into is that if you have windows open on one of the USB displays, then unplug the docking station, the windows will sometimes get "stuck" off-screen. At that point, the only option is to close the windows through the taskbar and restart it.

We did not see many instances of lagging or stuttering after updating the driver, but isolated instances of display lag should be expected since the display relies on CPU processing and shares the USB 3.0 bus with every other USB 3.0 device attached to the system. For this reason, we would not recommend USB 3.0 displays for things like gaming since you would not want to introduce the potential display lag. However, for movies or web browsing, this docking station works wonderfully.