3Gbps vs 6Gbps, Intel vs Marvel 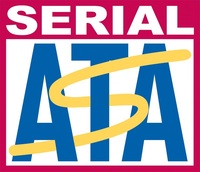 In modern computers, the Serial Advanced Technology Attachment interface (SATA for short) is used for connecting drives to the rest of the system, whether they are lowly DVD drives or cutting-edge solid-state drives (SSDs). This technology is on its third generation now: the original SATA specification provided up to 1.5Gbps of bandwidth per drive, SATA II increased that to 3Gbps, and in 2009 SATA III doubled it again to 6Gbps. Those numbers are theoretical maximums though, and never quite fully achievable in practice.

Now that the SATA III specification has been around for a while, an interesting trend is occurring. Drive manufacturers are moving to support the faster 6Gbps interface on their drives, even when the internal capabilities of drives can't get anywhere near those performance levels. Western Digital is in the midst of that transition now, and is even moving their slower and quieter Caviar Green line of drives to the faster interface.

This creates the expectation in folks building or buying computers that the drives should be hooked up to 6Gbps capable SATA ports on motherboards, which sounds ideal until you realize that most motherboards only have a limited supply of those. AMD has actually gone ahead and updated all SATA ports on their motherboards to the SATA III specs, so there are no worries there, but Intel has lagged behind. The current Intel chipsets either support two (2) SATA 6Gbps ports on most socket 1155 Sandy Bridge platforms, or none at all, as is the case on socket 1156 and 1366 designs.

Facing the lack of newer SATA ports, many motherboard manufacturers have opted to add additional controller chips to their boards, usually providing another pair of SATA 6Gbps connections. These controller chips don't truly live up to the performance that SATA III should offer though, and here at Puget we have seen staggering failure rates on them. This places us, and our customers, in a conundrum: do we hook drives up to 6Gbps ports to match what the drive manufacturers advertise, and folks naturally expect, or do we stick to 'slower' 3Gbps ports that are far more reliable?

Thankfully the answer is clear once some research into performance is done: no traditional platter SATA hard drives can actually run fast enough to benefit from a 6Gbps interface, so sticking with a more reliable chipset connection is logical. Don't believe it? Check out the following charts: 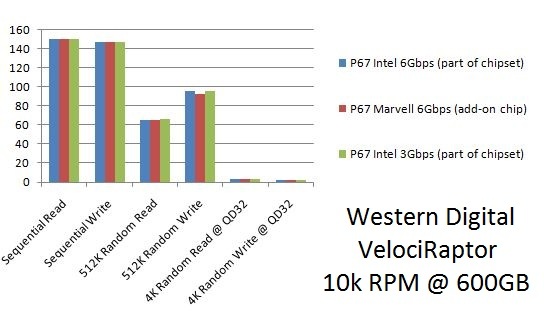 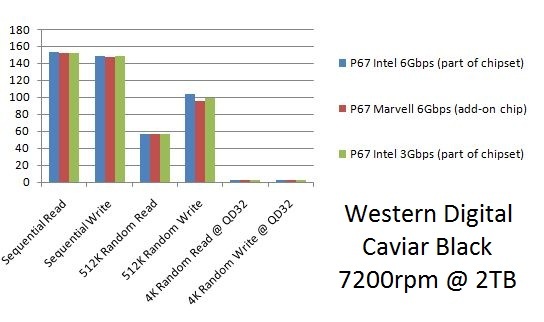 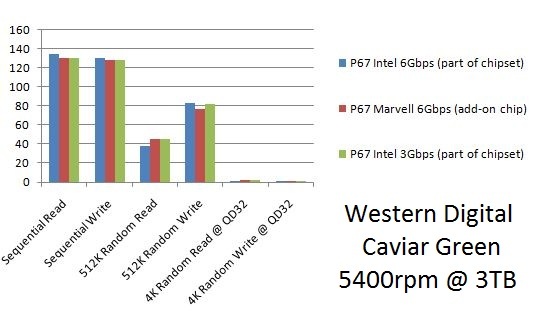 Those charts cover all three types of SATA hard drives available: high performance 10k rpm models (VelociRaptor), mainstream 7200rpm (Caviar Black), and slower storage drives (Caviar Green). They also show results from using each drive on three different SATA controllers: the Intel 6Gbps ports built into the P67 chipset, the Intel 3Gbps ports from the same chipset, and another 6Gbps controller that is included in the motherboard. On most modern Intel-based motherboards, including the one used here, that added controller chip is from a company called Marvell.

In all cases the drives perform almost identically no matter what controller they are on, and if anything sometimes a bit slower on the add-on Marvell controller we tested. With results like that, we are confident in placing such drives on 3Gbps ports, and when the options are either those ports or an unreliable 6Gbps port then there is simply no contest.

We also tested drive latency across these controllers, but there is no point to showing a chart: all drives performed nearly the same regardless of what controller was used - within a 0.1ms across the board. It was interesting to note that latency is the one area where the 10k rpm VelociRaptor drive pulled ahead of the Caviar Black. The average latency scores there were 6.8ms vs 9.8 for the Black (with the Green coming in at 12.1ms). Unless latency is a huge factor for you, though, the Caviar Black drives end up offering the best performance for the capacity and price.

Now there are drives these days which can benefit from the added speed of a 6Gbps SATA III interface: solid-state drives. Here is a chart showing Intel's 510-series SSD on the same three controllers: 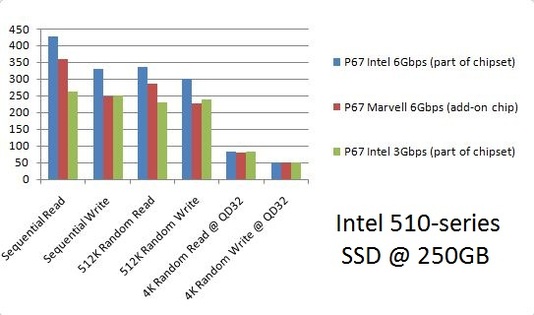 As you can see, the Intel 6Gbps controller roundly beats the Marvell version, which in turn manages to perform faster than the Intel 3Gbps controller in read tests. That departure from the results we saw with hard drives is the only place the Marvell controller seems to be able to make a name for itself, but even there it does not come close to providing the performance that true 6Gbps drives are capable of.

Due to the testing results above, and the overwhelming reliability issues with Marvel controllers, the only place we would recommend use of a 6Gbps add-on controller chip is when a 6Gbps capable SSD is being connected, and no Intel 6Gbps ports are available (either because none exist on a given board, or because they are already in use).

We ran these tests on an Asus motherboard with Intels P67 chipset, but a second set of tests was also run on an Intel X58 chipset motherboard. On that board, no Intel 6Gbps controller was available, but the comparison between the Marvell 6Gbps controller and the Intel 3Gbps ports was nearly identical, so it would be pointless to provide more graphs showing the same type of data.

Speaking of tests, I want to give a big shout out to Kyle in our production department. He was kind enough to dedicate several hours to testing the many drive and controller combinations involved. He used Crystal Disk Mark for the throughput results, and HD Tune for latency (access times). Thanks Kyle!
Tags: Technology, Motherboards, Hard Drives, Performance