nVidia says that it gives the consumer "heart-pounding PC performance." It will deliver "unparalleled gaming experience." So what is it? And where can I find it? And what do I need to run it? These are the questions you may be asking yourself, as I was, when I first read about nVidia's new SLI technology for PCI-Express. Well, I am here to answer those questions for you. To tell you what exactly this newfangled technology does to deliver this "unparalleled gaming experience."

What is SLI Technology? 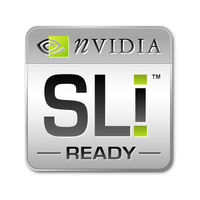 Ahhh, the first and most obvious question. What is this brilliant new idea? Well, SLI stands for Scalable Link Interface. In English, that means that it supports multiple graphic processor units (GPUs) on one motherboard and one monitor. This is a monumental leap in graphics technology which will turn the computing world as we know it upside down. Its been hailed in Popular Science Magazine as one of the top 100 tech innovations of the year, a remarkable feat for nVidia, who looks to gain the majority of the GPU market back after losing their stranglehold to ATI.

What is the Performance Gain of SLI?

Imagine Doom 3 turned all the way up on every option running at 99 fps (frames per second). This is, for most of us, not even remotely possible. But with SLI, nVidia claims that, depending on the application, the gain can be as much as double the normal speed. That type of gain with one innovation is unheard of in the computing industry. However the "depending on the application" is vague and only time will tell whether that's true. Nevertheless, it is logical. Double the number of graphics cards, double the power. I guess two heads really are better than one.

What do I need to utilize SLI? 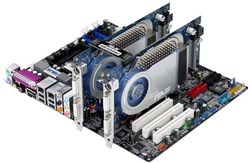 So now you know what SLI is, and what the gain is. Still interested? OK then, here's what you'll need to harness the power of SLI. The first thing is an nforce 4 chipset motherboard, which as of November 17, there is only one on the market, and it ships this holiday season, that being the Asus A8N-SLI model, pictured to the left. This model, and other future SLI compatible motherboards, will feature a separate MCP (Media Communications Processor), which is connected to the PCI express slots. These motherboards will also have a special feature which balances the bus speed between the two GPUs. Speaking of GPUs, a special kind of GPU will be necessary as well. An nVidia geforce 6 series card will be required. However, SLI capable motherboards do come with an SLI connector so that will not have to be purchased separately. In the picture below, you'll see a picture of two 6800GT cards, showing the SLI connector bridging them. 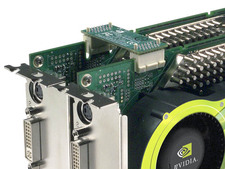 As of November 17, the parts necessary are not available on their own. However, Alienware says they have begun production and is shipping models with SLI technology, starting at around $6000. Of course, if I actually try to buy one, it gives me a ship date of late next month.

How Does it Work? 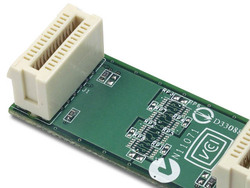 In an SLI system, both video cards are connected by means of a Scalable Link Interface, which is a high speed digital interconnect between both cards. This connector is on the 6600GT, 6800GT and the 6800Ultra PCI-E series graphics cards. This interface allows both cards to communicate and lets the computer distribute the workload between them, by using dynamic load-balancing algorithms. The graphics cards in SLI mode divide the screen horizontally. One graphics card renders the upper section and the second graphics card renders the lower section. The load balancing algorithms allow it to distribute the load across the graphics processors and memory. The load balancing between the two cards in SLI mode is handled within the nVidia Forceware drivers. Forceware driver versions 66.93 and later have support for SLI built in.

WOW! What a product, what a development, what a leap for the computing industry. SLI, according to some sources, will eventually become the benchmark of GPU technology. So should you get it? Well, seeing how expensive it is, I certainly will be waiting until the price tag drops, but if you have the cash on hand, there's no reason not to purchase an SLI ready computer or motherboard when they are released. After all, isn't "Heart-pounding PC performance" what we're all after?

Also, Tom's Hardware shows how the load is shared between the video cards:
http://graphics.tomshardware.com/graphic/20040628/nvidia-02.html