From our testing, we can come to a few conclusions. First, while the read performance of an SSD is not nearly as volatile as the write performance, the type of data you are using makes a huge difference in the write performance of a SSD. This may not be as important for older drives or those that do not use lossless compression, but it makes a big difference in drives that do. Next, if you are using incompressible data, expect to see a 20-30% decrease in write performance after you have written a little bit of data to the drive, and another decrease in performance after you have written roughly four times the drive's total capacity worth of data. Lastly, TRIM helps, but not by as much as we expected.

As for the question of whether you should expect to see the advertised speed on an SSD when using it in a real world situation, the answer is mostly no. Read performance should be pretty close to the advertised speed no matter that type of data you are using, but write performance will likely be much, much lower than advertised. Especially when you consider that most of the data that is written to a drive (though either saving or copying files) is incompressible data, the actual performance you should expect to see is only about 32-28% of the advertised write speed depending on how much the drive has been used. This is still very, very fast and a huge improvement over traditional platter drives, but not quite as fast as manufacturers advertise. 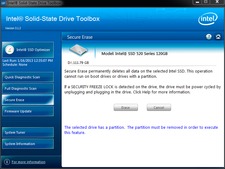 If you are at the point where your SSD's write performance is starting to degrade and you want to get it back to peak performance, the one surefire way to do so is to perform a secure erase on the drive which is available through the Intel SSD Toolbox. This wipes the drive so make sure you backup your data first! Simply remove the drive's partition, load the SSD Toolbox, click the Secure Erase button and follow the instructions. Think of this as a reset button that reverts the drive back to its original state.

While we would love to see manufacturer specifications that include speeds for both compressible and incompressible data, the problem is that even if a manufacturer wanted to do so, it would likely only result in confusing for the majority of consumers. Also, most consumers simply equate bigger numbers to better performance so no manufacturer wants to advertise smaller performance numbers, even if they are more realistic. However, advertising only compressible data performance (without even a caveat about the type of data being used) often results in unhappy customers which is also something that no company wants. Some manufacturers (such as OCZ) do show how they benchmark their drives, but this information is usually incomplete or buried in whitepapers.


For us at Puget Systems, The biggest thing we can do is educate our customers so they better understands the variances in SSD performance. However, we do have relationships with a few SSD manufactures that allows us to give them feedback about their products - including their marketing tactics. Unfortunately, we do not know what the solution is, so we are going to put the question to you, the reader. If you were suddenly in charge of Intel/OCZ/Kingston/Samsung/etc, and had the ability to change how SSD performance is advertised, how would you do so? Let us know in the comments below.