Skip to content
Always look at the date when you read an article. Some of the content in this article is most likely out of date, as it was written on September 2, 2011. For newer information, see our more recent articles. 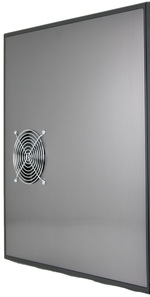 While there are many chassis available that provide more than enough cooling for even the hottest hardware, there are often reasons why one of those chassis may not be usable. It may be something as simple as aesthetics, or maybe your hardware simply won’t fit in the chassis. In these scenarios, you can often take a chassis that otherwise is perfect for your system and modify it slightly to improve the cooling.

In this article, we will be looking at the advantages of adding a side panel fan from a pure cooling perspective. While adding a fan to a system will slightly increase the noise level of the system, for this article we are going to ignore that aspect for the sake of simplicity. A fan mount can be modded onto almost any side panel, although panels with layers of materials (like the Antec P183 V3) are slightly more difficult due to the thickness and the tendency of the layers to separate during the cutting process.

For our testing, we decided to use the Antec P183 V3 for two reasons. First, it is one of our more popular cases at Puget Systems, so this testing will directly benefit many of our systems. Second, it is a case that is designed for quiet operation and is not known for having amazing cooling. If we started with a high-airflow case that already has great cooling, it would be difficult to measure any temperature variances the side panel fan may create.

Our test system will be largely the same as the system in our Vertical vs. Horizontal Case Cooling article so that we will be able to get a few extra data points without having to do any additional testing. The two large differences are that the PSU was changed to a more common PSU for this case and that the Coolit Eco II was configured as an intake (which is our default configuration).

To fully load the system, we ran a combination of Prime95 and Furmark until the temperatures stabilized (roughly 10 minutes) with CoreTemp and GPU-Z being used to log the temperatures. This will cause higher temperatures than any normal user is likely to see, but should give us a clear worse-case scenario for cooling.

We will be testing four different cooling configurations. Twice with the case fans on low and twice with the case fans on medium. For the actual side panel modificaion, we will test with no fan and with a 120mm fan positioned to provide maximum cooling to the video cards, as well as providing a small amount of cooling to the chipset. Since the CPU cooler is getting air directly from outside the case, the CPU temperatures will be largely unaffected by adding a side fan. But since we were getting the data anyways, we went ahead and included it in the charts.

To give a point of comparison, we will also include the temperature readings and thermal images for the Silverstone FT02B-W from the Vertical vs. Horizontal Case Cooling article. The Silverstone FT02B-W is one of the best cooling chassis we have seen, so it will be a good benchmark for us to compare our results against. For ease of visual comparisons, we will rotate the FT02B-W thermal images to match the orientation of the Antec P183 V3 images. We also only have readings for the FT02B-W running fans on the low setting, but we will go ahead and include the readings on both tables.

The temperature logs show a nice 10-12° C drop on the video cards with the side fan added. With just the addition of the one side fan, the load temperatures are already almost equal to our benchmark Silverstone FT02B-W system.

We know from experiance that the fan in this GPU only runs at full speed once it gets past 96° C, which is why both the side fan test and the FT02B-W are both running at that temperature. Since the fan is throttling, we can determine the efficiency of the cooling configuration based on the GPU's fan RPM. Our reading show that while the side fan is able to keep the GPU at its target temperature, it is almost running at 100% fan speed. In comparison, the FT02B-W is only running at about 90%

Oddly, the CPU idle temperatures are not as good in either test as the Silverstone FT02B-W. This is strange because the CPU cooler is drawing air directly from outside the case in our test system, while in the FT02B-W it is configured as an exhaust. However, under load, the direct intake allows the P183 V3 to have a bit better CPU temperature than the FT02B-W.

The thermal images clearly show the benefits of a side fan, with the hotspots on the motherboard being much smaller when it is included. With the system at load, the white-hot heatsinks on the video cards are replaced with much better looking orange and red readings. The image is close to our benchmark FT02B-W thermal image, but still has a bit to go to match it.


With the case fans bumped up to medium, we expected to see a decent drop in GPU temperatures. While we know that this GPU likes to sit around 96° C, the GPU fan speed did not reduce anywhere near what we expected. While we cannot be 100% sure, we believe that this is because the cooling bottleneck is no longer on the amount of fresh air the GPU is getting, but rather simply the limitation of the heatsink. Idle GPU temperatures did however show a 4-6° C drop in temperature, which brings the P183 V3 temperatures a bit closer to the Silverstone FT02B-W temperatures.

The thermal images show the main cooling advantages of having the case fans running at a higher RPM. At this point, the thermal images on the P183 V3 are even better than the FT02B-W. The fans are running at medium, so the system is certainly no longer quiet, but it is good to see that even this ridiculously hot test system can be cooled to this degree with something as simple as a side fan.

We have known for a while now that side fans can greatly increase system cooling, especially in relation to video cards and chipset. What we have been lacking is this hard data to show exactly how much of a benefit they provide. In the case of our test system, we took one of the hottest desktop systems we could imagine and managed to get the temperatures down to reasonable levels just with the addition of a singe side fan. Doing so clearly shows the potential benefit for having a fan positioned to blow directly over the video card(s).

From an effort/reward perspective, adding a side fan is one of the best things you can do to increase the cooling capability of your chassis. Many chassis today even include mounts for side fans, making the job almost effortless. If you are at all worried about your system running too hot, the addition of a side panel fan should be one of the first things to consider to lower your system temperatures.