For over a decade, USB has been the most common standard on computers for connecting peripherals. It has grown from a port found in small numbers on brand-new systems in the late 1990s to the near-universal standard for everything from input devices to data storage, and is even in widespread use for charging mobile phones. Our modern desktops feature between six and twelve USB ports, a testament to their widespread usage. 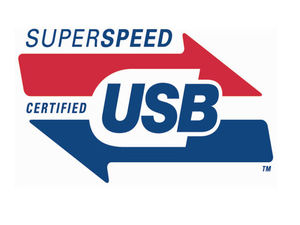 For most uses, today's common USB 2.0 standard is just fine: it is plenty fast for printers, mice, keyboards, and other basic uses. However, it has long been a bottleneck in data transfer applications. For example, external hard drives are often internally capable of 100MB/s or greater speeds but when used via USB 2.0 in real-world scenarios get only 20-40MB/s.

Other standards have risen to provide better results, but are usually limited in application: eSATA hard drives are fantastic, for example, but eSATA isn't practical for anything but drives. To compete with these alternatives, and maintain USB's market dominance, a new revision was needed - and it has now arrived, in the form of USB 3.0.

The new 3.0 revision allows for much higher transfer speeds - in theory, up to 4Gb/s, though real-world speeds are expected to cap out closer to 400MB/s. That is about a ten-fold increase in performance from USB 2.0, and will greatly help with the movement of large amounts of data.

This boost in speed requires additional wires in the connection between a computer and device, so while the specification is backward compatible with older 2.0-era hardware some care needs to be taken. There are three forms a USB port comes in currently - type A, type B, and Micro - which are pictured and described below. 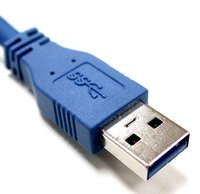 The A standard is usually found on the computer end of things, and you can plug 2.0 or 3.0 cable into either generation of socket. The shape is the same as previous versions of USB, but a blue color scheme has been selected as the way to tell the newer "SuperSpeed" devices and cables apart. 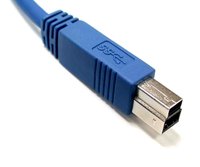 The B standard is built for use on larger devices, and is physically different in the 3.0 specification. Thus a 2.0 type B plug can fit into either a 2.0 or 3.0 socket, but a 3.0 plug cannot fit a 2.0 socket. When connecting a legacy Type B device, then, one needs to use a legacy cable. 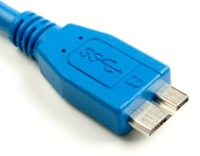 Micro USB is similar to type B, in that it is intended for use on devices (albeit smaller ones, like cell phone). Like B standard connectors, the 3.0 version is physically large than 2.0 - in this case having an additional group of contacts to the side, rather than on top. Legacy 2.0 cables will fit in 3.0 devices, providing only the lower speed of course, but not the other way around.

As of this writing, most motherboards we offer have two USB 3.0 ports provided by an extra chipset on the motherboard. Further ports can be added via expansion cards, though some motherboards don't yet play nicely with the new standard. The next major chipset revisions from both AMD and Intel are expected to add USB 3.0 functionality across the board, which will help drive adoption of the technology - but those probably won't be reaching consumers until early 2011.

On the device side, USB 3.0 started showing up in January of this year. So far it is mostly limited to use on external hard drives and flash drives, but that will expand to other types of peripherals in time. The reason data storage devices are leading the way is that the performance boost is most noticeable here. With the advent of USB 3.0, the limiting speed for data transfers is once again the internal capabilities of drives - both those in the external unit, and also inside computers. As has been the case with eSATA, you can now get get transfer speeds through USB 3.0 that rival those of a computer's internal drives!

It is my hope that this guide helps explain the new USB 3.0 standard, and answers any major questions you may have had about how it will work with existing hardware. If you have more specific questions, especially as this pertains to purchasing a new computer, please feel free to contact our sales consultants. You can also discuss this, and other issues, in our forums.