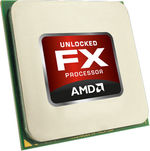 AMD has recently announced the launch of their new FX series of processors (codenamed Bulldozer). Featuring an increase in cache size, up to 8 cores per CPU, and a new 32nm manufacturing process, Bulldozer should be both faster and cooler than its predecessor. Even better, these new CPU's can be used in any AM3+ motherboard after updating the BIOS to allow Bulldozer support. To start this article off, lets take a look at what products are available at launch.

At launch, there will be four Bulldozer processors available, with a somewhat limited naming scheme. The only number in the model name that means anything specific is the first number, which denotes the number for cores. For example: a model number of FX-6XXX would be a 6-core CPU. The remaining three numbers do not mean anything specific, but indicate relative performance. A FX-X150 is faster than a FX-X120, but the model number alone does not show by how much.

The specs for the four launch CPU's are below:


What is interesting is that these launch CPU's take over almost exactly when the previous generation (Phenom II) left off. For example, the highest-end 6-core Phenom II ran at 3.3Ghz, with 3 and 6MB of L2 and L3 cache respectively. The new FX-6100 has the exact same frequency, but twice the L2 cache and a third more L3 cache. Bulldozer is the first true 8-core AMD processor, so there is no direct comparison to the previous generation, but the frequency range is very close to the Phenom II 6-core processors.

Below is a quick breakdown of the features of the Bulldozer FX series of processor versus the Phenom II series.


The increase in L2 and L3 cache is very important improvement from a performance perspective. In almost all cases, more cache directly results in an increase in performance. The increased memory frequency support can also benefit performance, but only becomes a factor when using RAM faster than DDR3-1333.

The process technology also does not directly affect performance, but it does two things that can potentially increase performance. The first is that since the manufacturing process is smaller, there is the potential to fit more transistors into the same amount of space. Even at launch, this is already noticeable since AMD is able to fit a full 8 cores into the same space that could previously only handle 6 cores. Secondly, a smaller manufacturing process results in lower temperatures, which in turn gives the processor more thermal headroom.

This thermal headroom can be taken advantage of with AMD's Turbo Core Technology which allows the processor to automatically overclock individual cores as long as it can stay below a thermal and power threshold. The technicalities behind this technology are very complex, but what it comes down to is if an application is causing a heavy load, the processor can overclock the cores that are in use. Depending on the number of cores being used (more cores means less overclock per core) and the thermal/power headroom, this overclock can be as much as a full 1Ghz, which can give a very noticeable performance boost.

On paper, Bulldozer looks to be a great addition to AMD's line of CPU's. We are currently in the process of thoroughly testing a FX-8150 CPU, so be sure to check back in the coming weeks for our in-depth performance review.