Skip to content
Always look at the date when you read an article. Some of the content in this article is most likely out of date, as it was written on November 14, 2011. For newer information, see our more recent articles.

Sandy Bridge-E is the latest line of processors from Intel that brings the improvements from Sandy Bridge to a larger, more powerful socket. While CPU's have largely hit a frequency ceiling in the last few years, Sandy Bridge-E makes improvements to other areas of the CPU that are not nearly as widely discussed. In this article we will be taking a look at these improvements and how they will affect the performance of these new processors.

For more information on the performance of these CPU's, you can view Puget System's product qualification for the Core i7 3960X and Intel Core i7 3930K here.

Below is a quick breakdown of the features of Sandy Bridge-E versus the previous Gulftown line:


Starting at the top, the extra L3 cache is nice, but not as significant as the other improvements. The jump from 3 x DDR3-1066 to 4 x DDR3-1600 is huge and should give a very significant boost to system performance when using high-end RAM. This increase in supported speed is what causes the memory bandwidth on Sandy Bridge-E to double over the previous generation.

The 4 additional PCI-E lanes may not seem like much, but it allows for 2 x16 links and an x8 link to operate at once. This is great news for gamers as it allows for SLI/Crossfire configurations to run at full x16 speeds while still being able to have a x8 PCI-E card installed. This also has applications in server environments since it allows the use of even more x8 PCI-E cards (such as RAID and network cards).

The most obvious change is the physical move to the new socket 2011. The name 2011 refers to the number of pins connecting the CPU to the motherboard so the 30% increase in the number of pins should theoretically allow for more data throughput.

Finally, the upgrade to Turbo Boost version 2.0 allows for much higher turbo boost frequencies than original version. Turbo Boost allows the processor to automatically overclock itself for short periods of time as long as it can stay below a certain thermal and power threshold. This allows for short bursts of increased performance when an application comes under a sudden heavy load. The Intel Core i7 990X (the previous highest-end CPU) could only turbo from 3.46GHz to 3.73Ghz, which is only a modest .27GHz increase. The new Sandy Bridge-E Intel Core i7 3960X can turbo from 3.3GHz to 3.9Ghz, which is a much more noticeable .6Ghz increase.

For more information on Turbo Boost Technology 2.0, you can view the demo video from Intel here.

Socket 2011 introduces a few changes over the previous Socket 1366 beyond just the number of pins. Since the CPU's are larger now, Intel is introducing a dual latching system using a pair of levers to help keep the CPU in place. This is a bit confusing to use for the first time, so we took a series of pictures showing each step of the process. If you would prefer to see the steps as a slideshow, simply slick on the first image to bring up the image viewer and click the next button on the bottom-left. 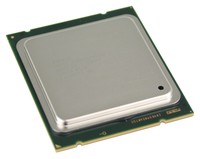 While many of the improvements may seem minor, they all should add up to a nice performance boost. Since modern PC games are becoming more and more GPU limited however, this performance increase will not be as noticeable for gamers unless you are using the additional PCI-E lanes for crossfire/SLI support.

Where this new product line will truly shine is in servers and CPU-intensive computing. Video production/conversion and 3d modeling are just two instances where the new Sandy Bridge-E CPU's should have a large impact on performance. A wide range of server applications should also benefit, although at this time the only Sandy Bridge-E CPU's are technically only desktop-class, not server-class.

For more information on the actual performance of Sandy Bridge-E, we recommend reading our qualification article for the Intel Core i7 3960X and the 3930K (linked below).