Skip to content
Always look at the date when you read an article. Some of the content in this article is most likely out of date, as it was written on April 23, 2007. For newer information, see our more recent articles. 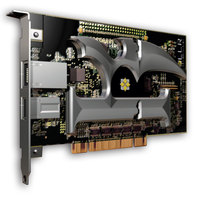 In the ongoing efforts to squeeze every possible performance improvement out of their computing rig, most folks focus almost exclusively on the two heavy hitters in their system when it comes to generating frames per second (FPS): CPU and video card. Is it possible that both consumers and hardware manufacturers have been overlooking an untapped area for improvement?

Enter the Killer NIC from Bigfoot Labs, who has targeted their product directly at gamers by making the rather impressive claim that their network card will not only lower your in-game lag, it will also increase your FPS. How does it do this? The answer is a bit technical, as one might expect, but in essence the Killer NIC bypasses the Windows networking stack completely, sending all networking calls directly to the card for processing. 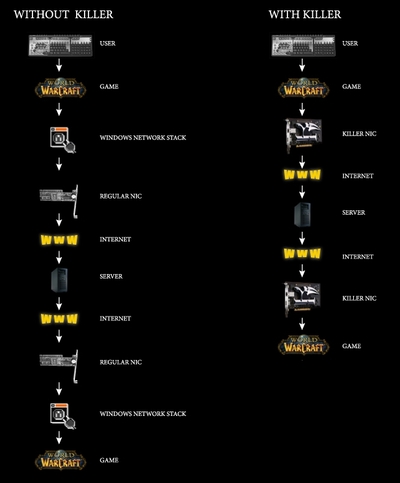 In terms of specifications, the Killer NIC is a 10/100/1000 PCI network card with an onboard 400MHz Network Processing Unit (NPU) and 64MB of RAM. The card is also packing an external USB port, which we’ll get to a little later on. The idea here is threefold: First, latency is reduced by removing a step from any network communication, as illustrated in the diagram below. Second, since the CPU no longer has to worry about handling networking calls, it has more free cycles to put into the game, which is where the FPS bump comes from. Finally, the Killer NIC is capable of intelligently prioritize inbound and outbound packets, ensuring that traffic from your games is handled first.

Unfortunately, testing the claims of the Killer NIC is somewhat more difficult than testing your average video card. Whereas a video card can be given a static, unchanging benchmark, the Killer NIC must be tested in online play, where many more uncontrollable variables are introduced. For our tests, we attempted to stick to servers with single-map rotation, as well as performing our tests as closely together as possible. Average frames per second were gathered using FRAPS, and average latency was calculated using a continual ping against the servers we were connected to. 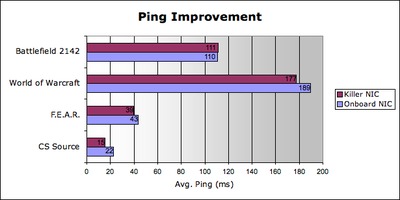 Ping did indeed improve in three of our four tested games. Interestingly enough, Battlefield 2142 suffered a very minor performance hit, though not by enough to really negatively affect the game. According to Bigfoot, some games simply implement their network calls differently and must be handled on a case by case basis. They hope to improve on games with low scores as their drivers and firmware progress. 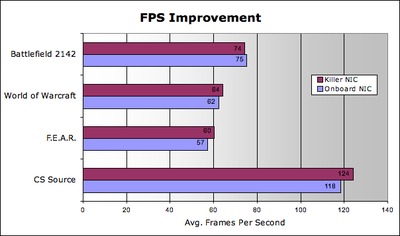 Once again, F.E.A.R. and Counter Strike both see minor improvements while 2142 suffers a slight drop. There is almost no difference in the World of Warcraft scores, but this can be attributed to a known bug in WoW that causes framerate on dual core processors to cap at 64fps.

It’s difficult to describe, but on a personal level, the performance improvements seen in the card feel as if they go beyond what the numbers describe. The differences might be compared to re-paving a road and removing the speed bumps: The speed might be slightly increased, but the real difference is in the removal of the little jarring bumps and hiccups along the way. In many ways it was most noticeable in World of Warcraft, which came as somewhat of a surprise as I had expected it to depend least on the latency. The biggest changes came in traditionally laggy areas like Ironforge, which performed obviously better with the Killer NIC. It’s amazing how many little jarring pops in character placement and animation occur that you don’t even notice until they’re gone.

We mentioned previously that the Killer NIC has a fairly hefty onboard processor and RAM along with an external USB port, and if you were to speculate that it sounds a lot like a tiny computer then you wouldn’t be far off the mark. The processor is actually only using about 5% of its capacity during normal network load, so what are you going to do with the rest of those cycles? Well, the Killer’s internal operating system is actually running a Linux variant, and you can connect to it and execute code on it just like you would any other Linux terminal. 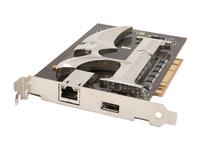 This allows the Killer to run what Bigfoot Networks calls “Flexible Network Architecture” apps, or FNA Apps, which run directly on the card and never touch the rest of the computer. At the time of this article, Bigfoot has already released the FNA Firewall, which is an open source firewall built with iptables. Bigfoot is also encouraging the development of other “FNApps,” and has even offered cash rewards for FNApp developers.

The extensibility of the Killer NIC as a miniature networking platform is actually pretty impressive, especially when you consider the flexibility offered by the aforementioned USB port. The USB port is accessible only to the card and not to the operating system. This means that you could design apps that took advantage of peripherals like an external USB hard drive or headset. Imagine if you will a webserver or P2P app that connects directly to an external hard drive and automatically scales available bandwidth so that you can game smoothly without ever shutting those applications off. Another example might be an FNApp version of Ventrillo or Teamspeak that adjusts voice quality settings to avoid impacting your game.

There are three potential downsides that any potential Killer NIC owner needs to keep in mind. The first is almost always going to be the price: At roughly $250, this is no small investment. For someone upgrading from a low-end system, this is very frequently going to cost more than a new video card, and in many cases the video card would provide a more substantial improvement. It should be noted, however, that Bigfoot Networks has recently released the Killer K1, which is a “budget” version of the Killer available for around $180. It is essentially an underclocked version of its bigger brother, though access to the USB port and FNApps are available only after a paid upgrade.

The second thing to consider is that since each game implements the Windows networking stack differently, each individual game is going to see different performance benefits. In some rare cases, such as Battlefield 2142, you may even see a minor performance hit. The silver lining in this cloud is that the Bigfoot team has been extremely diligent in releasing frequent driver and firmware updates, and hopefully these issues can all be sorted out over time.

Finally, since the Killer NIC will cause your system to essentially ignore Winsock, other networking cards will not function while the Killer drivers are installed. This should only matter to an extremely small segment of consumers, but if you happen to be running more than one network port out of your machine then it’s something you’ll need to consider.

There’s no doubt that $250 is a lot to ask for a network card in an era where gigabyte NICs are practically standard on motherboards. The real question is what value this device brings and for whom it is intended. The Killer NIC does perform as advertised: it lowers latency and provides marginal framerate improvements in real-world gaming scenarios. However, in many cases users wishing to see performance improvement would do better by way of a CPU or video card upgrade. This card simply isn’t meant for them.

The general experience using the Killer NIC is somewhat of a mixed bag. There were surprisingly noticeable performance gains in some games, like World of Warcraft, whereas some of the other tested games had a performance improvement that was marginal enough to seem unnoticeable. Still, the overall experience was positive, and the number of updates and support this card receives from the manufacturer is incredibly nice.

In short, this card is designed and intended for dedicated gamers who pride themselves on refusing to settle for even a single sub-par component, and in that capacity it is sure to deliver satisfaction. For hardcore deathmatchers and other twitch gamers, the Killer NIC is a great way to wring some additional performance out of your system. The weak of heart need not apply.