The Sound of Silence: Building a Quiet PC

It's easy enough to make a fast computer: take an Asus M2N-SLI Deluxe, add an AMD Athlon 64 FX 62 processor, 4 gigabytes of high performance Corsair XMS RAM, and two PCI-express Geforce 7950GX2 video cards, and you have a system that should stay above the minimum system requirements on games for years to come. It's an easy-to-follow formula. The results are always the same, and the only problem is money. It's easy enough to make a fast computer...what's not easy is making a PC like that quiet! It can be especially difficult since the components tend to run hot. The key is finding the right balance between performance, optimal cooling, and quiet. This article will show how you can have a system that roars with power but not noise.

First off, it should be said that defining what we mean by "quiet" can be surprisingly difficult, since the term is subjective to the user. Many quiet PC enthusiasts define a quiet system as one that's inaudible from a distance of about 3 feet. Others define a quiet system as one that's simply not irritating to them while they work. While we have a scientific metric for loudness, the only person who can tell you if a whoosh or clicking is pleasant or annoying is the listener. It is not the goal of this article to define the term "quiet," but we did feel it important to mention!

Since components produce heat, some sort of thermal management is a necessity for all computer systems. In this article, we're focusing on active (as opposed to passive) cooling, so let's move on to talk about fans. Now, while there are other noise producers in a system, the fans are usually by far the loudest. How do you make fans quiet? 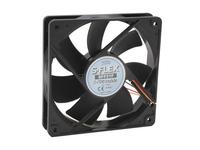 Go big! Larger fans are usually quieter. For example, the stock CPU fan for Intel Xeon processors is tiny. It is about 45 mm (an inch and a half) on a side, and 40 mm (1 1/4 in) tall. The problem is that these small fans need to spin very fast to move enough air to keep a processor cool, and so they make a terrible racket! Compare that to the massive Scythe S-Flex 120 mm (4 1/2 in) fan, which moves every bit as much air, yet the sound of the fan is hardly noticeable at arm's length!

Now, let's look at some specific components and how to reduce noise. First on our tour of the computer is the case. The case usually has the most fans, and thus, the most potential for producing noise. As has just been covered, the largest fans are usually the quietest. So, we want cases with as many large fans, and as few small fans, as possible. Puget carries several cases like this. Some of our cases that only have the large 120 mm fans are the Antec P180 and P150, as well as the Lian-Li V-1000 and V-1100. Any of these cases would be good starters for a quiet system.

If you're disappointed that a case you love doesn't have 120 mm fan mounts, not to worry! It is also very possible to quiet down a system that has the smaller 80 mm fans by using very quiet, upgraded 80 mm fans. Fan controllers also make it possible to run the fans at less than full speed.

Also, keep in mind that a case with a front door that you can close, such as the Antec P180 and the Lian-Li V-1100, will put more material between you and the fans, which will help to dampen the sound. 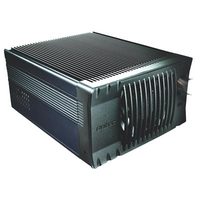 Next on our tour: the power supply. Most power supplies have fans. One notable exception is the Antec Phantom 500 Watt power supply, which has no fans, and thus makes no noise. However, it also is not very efficient, and brings extra heat into your computer. Not only that, but it is also larger than most other power supplys, potentially causing a compatibility problem with certain cases. Fortunately, there are other quiet options. The Seasonic S12 Series 500 Watt power supply is one. Side by side with the Phantom, there is virtually no noise difference, and the Seasonics are smaller, cooler running, and less expensive! This is why they are the suggestion on our Puget Certified Quiet Desktop Computer and Quiet Gaming Computer. 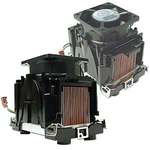 The XP-90 supports a 90mm fan, while the XP-120 fits a 120mm fan. Our tests show that these heat sinks,
especially when paired with quality fans like those from Papst, provide superior cooling and significantly quieter operation compared to stock HSFs. Again, by varying the input voltage, these fans can be run even quieter, at the expense of cooling power.

Yet another fan to consider is your graphics card cooler. Modern graphics cards put out a ton of heat, and need to move a lot of air to keep cool. They also have fairly small fans, which spin at high RPM, and thus make noise. There's a reason Puget offers the big Arctic Cooling graphics card coolers. 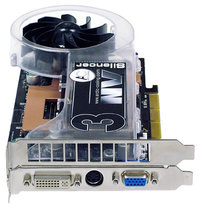 Their big fan spins slowly and quietly. I have seen several systems with the big CPU heat sinks and the quiet power supplies... and a graphics card fan that literally screamed, shattering whatever quiet factor the system may have had - so don't forget about your video card when planning a quiet system! Some video cards, like the Gigabyte 7600GT on our quiet configure page even come with passive cooling -- no fans! You need to be careful to give your case enough airflow to support a video card like that, but with the right design, you can eliminate this source of noise entirely!

So, just stick with big fans and you'll be OK, right? Well, not quite. There are more moving parts in a computer than just the fans...

How about the hard drives? They can make a lot of noise, especially when they vibrate the entire case. Cases like the Thermaltake Tsunami and the Antec cases have rubber grommets that insulate the hard drives from the case, thus preventing the transfer of vibrations. However, hard drives still make noise.

The hard drive enclosure that Puget sells, although pricey, is worth it for a truly quiet machine. It encases the hard drive in foam rubber, effectively muting the drive.

Also, choosing the right kind of hard drive is a big thing. The Western Digital Raptor series, spinning at ten thousand RPM are certainly fast, but they also make more noise than a standard 7200 RPM drive. The quietest hard drives that I have heard (while idle) are the Seagate SATA series. They spin quietly, but even they make noise when accessing data.

The last and most overlooked noise producers are the CD and DVD drives. I really can't give much advice, except this: Don't get in the habit of leaving disks in your drives! The Plextor drives (especially the CD burner) are quieter, but they also cost a lot more. 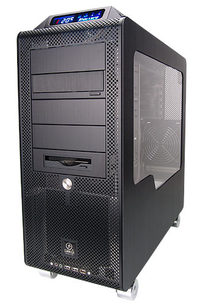 'What about liquid cooling', you ask?

I have found that some liquid cooling setups, most notably the Zalman Reserator and the Koolance 3/8 in. setup to be fairly quiet. The Zalman is a very large external radiator which works well, until you try to move your PC. Either you have to drain the system, or move it with the radiator attached, and hope nothing leaks. This is a fairly large limitation that prevents Puget from selling the product, but we do carry the full Koolance line. The Koolance cases feature an internal liquid cooling setup that works quite well. Making a liquid cooled setup quiet is arguably much easier, but with enough work, a good air-cooled system is still quieter in the end.

Building a quiet computer is an art: every component must be chosen carefully, and used to the best effect. A quiet system will cost more than a standard one, but it's definitely worth it. When was the last time you had to check your power LED to see if your computer was on?