Most computer technologies are only the latest and greatest for about a year or so before they are replaced with something new. The X79 chipset is somewhat of an oddity because it has been around for almost three years without a newer version being released. This makes it a very established chipset, but due to its age it lacks many of the newer features like that are present on other modern chipsets like Z97. For example, X79 does not have any native USB 3.0 support and only has two SATA 6Gb/s ports. 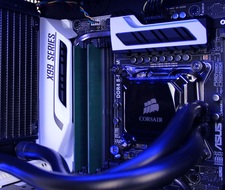 Because of how long X99 was under development, it brings a ton of changes and improvements over X79 including native USB 3.0, more SATA 6Gb/s ports and support for DDR4 memory. In addition, Intel is also launching the new Haswell-E CPUs to go along with the new chipset. Unlike X99, however, the Haswell-E CPUs are not quite as clearly superior to the Ivy Bridge-E CPUs they are replacing. They certainly have plenty of improvements, but at the same time have a drop in frequency which may result in little to no performance benefit in some applications.

In this article we are going to look at the specifications of the X99 chipset and Haswell-E CPUs and compare them to the previous generation X79 chipset and Ivy Bridge-E CPUs. If you are interested in benchmark numbers for the new chipset and CPUs, we recommend also reading our Core i7 5960X vs. 4960X Performance Comparison article.

*In addition to the available PCI-E 3.0 lanes from the CPU


The next major improvement in X99 is the addition of DDR4 memory support, breaking out of the DDR3 slump we've been in since DDR3 was launched way back in 2007. For more information on DDR4 memory, check out our Tech Primer: DDR4 Memory article.

Moving on to the integrated controllers, X99 finally adds native USB 3.0 support. The total number of USB ports remains 14, but now 6 of those ports can operate at USB 3.0 speeds without the need for a third party controller. Similarly, X99 increases the number of SATA 6Gb/s ports to ten - up from the two SATA 6Gb/s ports found on X79. While not an official part of X99, we have also found that many X99 motherboards include a M.2 x4 slot that supports PCI-E x4 M.2 drives.

Overall, X99 adds everything we felt was lacking with X79 plus support for DDR4 memory. With the prevalence of USB 3.0 devices and high-speed SATA drives, native USB 3.0 and more SATA 6Gb/s ports is more important than ever before and we are very happy to see these technologies more thoroughly adopted in the X99 chipset.

Below is a quick breakdown of some of the major features of Haswell-E versus the previous generation Ivy Bridge-E with the notable differences in red:

*Not compatible with Sandy Bridge-E and Ivy Bridge-E processors

Starting at the top, the biggest improvement with Haswell-E is that is can have up to eight physical cores. While eight cores on a CPU is not really new, this is Intel's first consumer-level eight core CPU. Haswell-E also features an integrated voltage regulator similar to the Haswell CPUs. This improves overall system efficiency and provides much more consistent power to the CPU components. This should both slightly improve performance and lower the overall system power draw a bit, but the disadvantage is that it increases the CPU's power draw so Haswell-E CPUs are rated to pull 10W more power than Ivy Bridge-E CPUs. 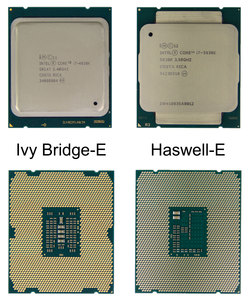 Like we discussed in the previous section, Haswell-E uses the new DDR4 memory and LGA 2011-3 socket with the X99 chipset. The socket change is really just to make sure you do not try to use Haswell-E CPUs in an X79 motherboard or Ivy/Sandy Bridge-E CPUs in an X99 motherboard since they would not be compatible.

The last major difference between Haswell-E and Ivy Bridge-E is that Haswell-E adds support for the AVX2 and FMA3 instruction sets. For the average user, these additional instruction sets are not going to result in any performance gains or losses, but programs that are specifically coded to use AVX2 and/or FMA3 (mostly for scientific calculations) should see a huge boost in performance. This is why in our 5960X vs. 4960X Performance Comparison article the 5930K and 5960X have a much higher benchmark score in Linpack than the 4960X.

All these specifications are for Haswell-E versus Ivy Bridge-E as a product line and makes Haswell-E look very attractive. When we look at the individual CPU specifications, however, the waters become a bit muddy:


In general, the Haswell-E CPUs have a higher core count and more Smart Cache than Ivy Bridge-E, but run at a lower clock speed. Starting on the low end, the 5820K has two more cores and 5MB more Smart cache than the 4820K, but the frequency is .3-.4GHz lower. Unique to Haswell-E, the 5820K also only has 28 PCI-E lanes versus the 40 that are found on the other CPUs. While this shouldn't be a problem for the average system, if you are planning a SLI/Crossfire system - or simply want a lot of PCI-E devices - the 5820K probably isn't the best choice due to the limited number of PCI-E lanes.

The 5930K is the one model that doesn't get an increase in core count, but it does still have a 3MB increase in Smart Cache. This is also the only CPU that has an increase in the base clock speed (by .1Ghz), but it still has a .2GHz drop in the maximum Turbo Boost frequency.

Finally, the 5960X has two more cores and 5MB more Smart Cache than the 4960X but has a .5-.6GHz drop in frequency. Performance-wise, this means applications that are well threaded and can use all eight cores should perform better with the 5960X than the 4960X. If an application only uses one or two cores, however, the 5960X might actually be slower than the 4960X. For specific benchmarks, we recommend reading our 5960X vs. 4960X Performance Comparison article.

Any way you look at it, the X99 chipset is a major improvement over X79. Native USB 3.0 support, more SATA 6Gb/s ports, DDR4 support, and all the other little updates simply makes X99 a much stronger platform. Add in the fact that many motherboard manufacturers appeared to have waited for X99 to add features like M.2 support, there is little reason to use X79 over X99 in a new system. The only thing that might make you hesitate isn't the chipset itself, but rather the new Haswell-E CPUs that go along with X99.

Haswell-E is a bit strange because in most ways it is clearly superior to Ivy Bridge-E, but in terms of sheer clock speed Ivy Bridge-E is actually a bit better. Haswell-E has more cores and AVX2 and FMA3 support, but those improvements rely on an application to be coded to be able to take advantage of them. Even the addition of DDR4 support and more Smart Cache isn't likely to add much in the way of increased performance. As DDR4 matures that is likely to change, but right now the extra bandwidth possible with DDR4 simply is not much of a factor.

For applications that are not well threaded and simply need the highest clock frequency possible, you may actually want to stick with a X79/Ivy Bridge-E system. However, our Core i7 5960X vs. 4960X Performance Comparison clearly shows that many applications perform much better with the 5960X than the 4960X. In addition, we've found that a X99/Haswell-E system runs cooler and draws less power than an equivalent X79/Ivy Bridge-E system. Add in all the improvements found in the X99 chipset, and an X99/Haswell-E system is clearly much more future-proof than a system based on the previous X79 platform.