Myself, and I'm sure many other scientists/"cravers of CPU cycles", have had an eye on Intel's Many-Integrated-Core architecture1 a.k.a. MIC, ("Mike") since the days of their efforts developing a discrete graphics card, i.e. Larrabee, back in 2006. The prospect of having a bunch of 64-bit x86 cores with 512-bit SIMD vector units sitting on a co-processor card was tantalizing. More than tantalizing actually, we really wanted THAT… instead of trying to get GPU's to do useful computing.

The codenames for this little gem have changed several times since Larrabee2, finally ending with the commercial prototype,"Knights Corner", being announced at the November 2011 Super Computing conference, SC11. That's it! That's what we want! We don't care what you call it! After much anticipation, it's in production, and we can get our hands on it! Yea!

OK, so what did they call it? …The Intel Xeon Phi!

When I first saw that Phi my left eyebrow raised in puzzlement. They named it "Phi"?, the "Intel Phi?", It just didn't sound right somehow — the Xeon "FEE"!!. You see, my background is in quantum chemistry and I've used the symbol "phi" i.e. \[ \Large \mathbf{ \Phi, \mbox{or } \phi, \mbox{or } \varphi } \] thousands and thousands of times in writing and speaking and I have ALWAYS pronounced it "FEE" — and, no mathematician, physicist or chemist has ever raised an eyebrow when I said it. True, we all know that you can also pronounce it like "FIE", (rhymes with "PIE") and the long "i" sound may indeed be the more common pronunciation, but, really?, Phi?

Well, the first thing I did when I started working with the great people at Puget Systems is to promptly taint everyone's pronunciation by using my habitual "FEE" sound. Sorry guys! Sorry Intel! I'll change my evil ways but I'm afraid the damage is done. I still hear "FEE" nearly everyday around here… maybe I'll just call it "Mike" like the techie guys at Intel do. No, no, I'll really try to say "FIE" from now on…

… And here is where it's going, 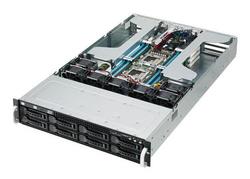 It's everything they said it would be, and I really like it, a lot! It's been exciting seeing the benchmark numbers and having accessible tera-FLOPS in a single box.

OK, now that I've gotten the name thing off my chest… In the next post I'll give you a proper introduction to this great computing device.