Taking a computer (not laptop) on a plane

Off to the airport for SC13 with a Peak mini loaded with an Intel Xeon Phi! 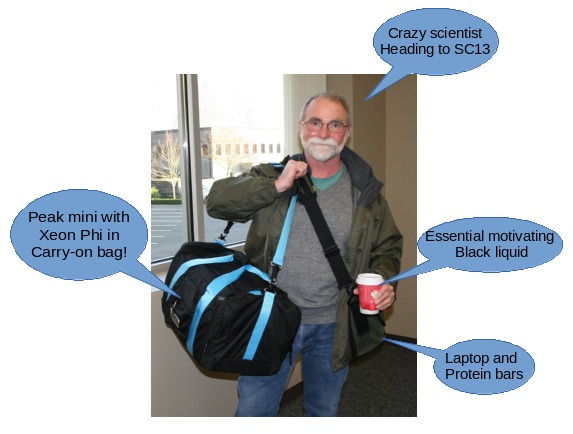 Yes, you can take a computer on a plane in your carry-on bag, as long as you satisfy the following points;

The first point is obvious. If your system and bag is too big for carry-on then the airline is not likely to let you bring it on the plane. If they say it has to be checked at the gate you may have to live with that sinking feeling that your sweet little machine may get mangled. I had a reasonably small micro-ATX form factor system in a nice duffel bag that was specifically made for the chassis. Very nice! It looks like a typical high quality soft duffel bag that people often bring for their carry-on. Even though the machine plus bag did slightly exceed the "thickness" dimension for a carry-on bag I'm sure they would just assume it was "squishy" enough that it wouldn't be worth checking. It easily fit in the overhead bin.

The second point was the one I was most worried about. Not the friendly conversation part, just the fact that they could have said "no way are you taking that through security". (I had a plan "B" to have the machine shipped if that happened.) Heading out of Seattle I got through the line at security and put my shoes, jacket, wallet, phone and belt in a tub, opened my laptop bag and set all that and the Peak mini in its bag on the conveyor belt and crossed my fingers. They didn't say a word about the machine! They did ask me to step aside because I had left a couple of Rolaids in my back pocket that they spotted when I went into the body scanner (thought I might need those). They did check my fingers for "residue" but were happy when all they found was some of the "tall americano" that I had sloshed onto my fingers on the way to the airport.

On the way back to Seattle from Denver they did ask me to open the bag but when I explained that I had been at Super Computing 2013 (SC13) exhibiting this little beauty at the Intel booth the fellows eyes turned from suspicion to pleasant interest. When I told him it had an Intel Xeon Phi in it and could do a tera-FLOPS in double precision he knew what I was talking about and just said "really cool!". That, by the way, was the phrase I heard from nearly everyone who looked at the Peak mini at the SC13 conference.

As for the third point above, I observed the interesting physical phenomenon that "the weight of your bag increases with the distance you have to carry it". The Peak mini in it's bag with it's accessories weighs around 25lbs (~11kg). Not too bad but I did walk by an empty wheel-chair thinking I could just hop on there with the machine on my lap and wheel my way up to the gate. I resisted and just savored feeling the "burn". Really, it was not that bad!

Here's a couple of photos of the Peak mini in it's bag;

Flying with the Peak mini was pretty easy overall. The SC13 conference was fantastic and the mini was well received and a really nice thing was that when the exhibition was over it took all of 5 minutes to pack up the stuff in our booth. While others were waiting around for large boxes and crates, I slung the mini in its bag over my shoulder and headed out the door!