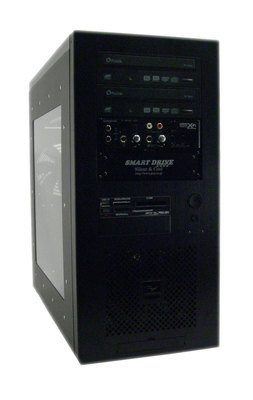 Jack gave me a call after reading our reviews on ResellerRatings.com, and said that he was looking for a system that was total overkill. He was after superb performance, but wanted to keep it quiet. That's what we've built here, in this Quad-Core "Monster". 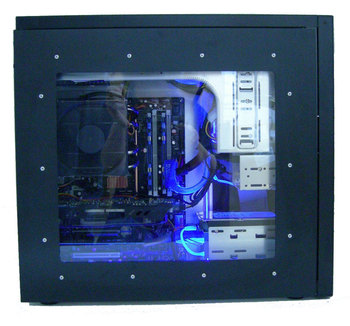 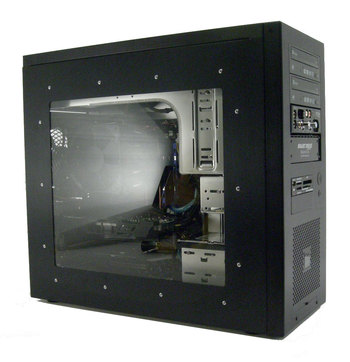 Nice system! It's far from wimpy.

I don't know if I'd call it a "Monster". It's got a powerful CPU and gargantuan hard drive.

"Monster" would be if you add: two 8800GTX or two 8950 GX2 in SLI for Quad SLI power! or 2 ATI X2900 XTX in Crossfire (both of these high end cards will be available relatively soon), two 150GB Raptor in RAID, liquid cooled CPU and liquid cooled and 1200w Koolance liquid cooled PSU.

Quadfather,
Thanks for your comments. I have learned over the years that what is the best today, has a
very short life but compared to my Apple II in 1979, this is a monster to me.
I was born in 1923 and have seen the unbelievable progress made in the past 80 years.
We only had a radio and staticy at that, and an RCA Victrola in my childhood. Today look what we have. Technology should be enjoyed and not taken for granted.

You're rig is pretty high-end, no doubt.

I personally don't mind buying a new pc every year or upgrading since I'm into the high-end. Although, it's a little hard to "enjoy" the technology, when upgrading so often.

These days people tend to (especially enthusiasts which the high end PC makers cater to) buy new computers (or upgrade) every 1 or 2 years. This all plays into the pc industry's strategy of making mega profits. This is especially happening in the emerging and ever growing enthusiast pc market. Imagine the record profits if the high-end pc craze caught on and became mainstream? This is what the industry's hoping for, where 5 grand and up PCs become the norm.

One way of increasing profits is for a company like Microsoft to release a new OS every 4 years instead of 5 years, and then keep decreasing it (the OS's lifespan) and forcing many people (massive marketing campaign) to think they need a new OS, thus more profits for Microsoft and the industry in general. And, cut off support for "older OS's" like XP, thereby compelling people to buy a new pc.

This does not happen in the car industry. Can you imagine if people were pressured into buying a new car every one or two years? People would go insane.

The good old days, where people enjoyed a computer and their new technology for at least 3 years without worrying about the need to upgrade or buy a new PC are long gone.

I don't think what you're describing actually happens.

It's been what, 6 years since the last operating system release?
Microsoft didn't stop supporting Windows 2000 till very recently, and expect to support XP till after 2010. They don't have a history of pulling the support rug out from under their customers.

There's a lot of ways that one can demonize Microsoft, but I just don't think the examples you gave above are accurate.

Imagine the record profits if the high-end pc craze caught on and became mainstream? This is what the industry's hoping for, where 5 grand and up PCs become the norm.

And for the record, I tried my best to talk Jack out of some of the ultra-high-end stuff on this quote. He wouldn't have any of it, he was really after cutting-edge. :) How many dealers do you know in the car industry that try and talk you into a car below your budget?

Hi Apple Jack!
I have learned over the years that what is the best today, has a
very short life but compared to my Apple II in 1979, this is a monster to me. I was born in 1923 and have seen the unbelievable progress made in the past 80 years. We only had a radio and staticy at that, and an RCA Victrola in my childhood. Today look what we have. Technology should be enjoyed and not taken for granted.
I have a strong interest in history in general, especially the history of science and technology. Learning the above about you is fascinating. In my experience, not many people of your generation had either the finances or inclination to embrace the personal computer as it began to emerge. I remember after I bought my first PC, an IBM PS/2 50Z, I had trouble convincing my grandfather that it was a worthwhile purchase. He decided to stick with his typewriter. ;-) One of my college professors, who is 10 years your junior, refuses to have anything to do with computers or the Internet.

Was the Apple II your first computer? I would be very interested to hear your perspective on technology over your lifetime, if you feel like sharing.

Over my childhood, two items stick in my mind: the Sony Walkman and handheld calculators. I remember so many kids were listening to their Walkmans that they ended up being banned (the radios, not the kids ;)) at my elementary and junior high schools. I guess it was my generation's version of the iPod. My first scientific calculator, made by Texas Instruments, cost over $100, and I remember dutifully saving my allowance and taking on odd jobs to buy one.

Quadfather, your perspective on everything is interesting but a bit puzzling. For example,I use 98 because I provide free computers to the disabled. I collect any old computer parts and assemble them into working computers. The fastest computer that has been donated so far is a 500MHz Pentium III. Windows 9x OSâ€™s are the only ones that have been donated and are the only OSâ€™s that will run on these old machines. These machines change the lives of many of the recipients and Iâ€™d like to thank everyone here for keeping the old OSâ€™s working. Youâ€™re helping a lot of people who otherwise wouldnâ€™t have computers at all.

Further, I think you might be overestimating most people's financial ability to upgrade and/or buy a new system every year or two. Think about people just starting families; people who have to pay their own way through college; people who become responsible for aging parents; and so on. Just something to think about.

This if for Max Mercury.
Your comments are welcome. We seem to have things in common. My first computer was the Apple II. I used it peronally and in business. I was a stock broker at the time and worked with a program call PEAR. This was a portfolio program for financial advisors and it worked quite well. I wrote articles about the program in Apple's computer journal. After the IBM machine made its appearance, the program and lots of business software were being written only for IBM's. I then sadly left Apple and bought the IBM OS.
I have been known as a softwareolic, buying anything that sounds interesting. Many programs were worthless and caused problems with my computer at the time.
My first calculator was a Sanyo, it cost $350.00 and only did four functions. It was battery operated and quite portable. Nothing like the HP's that followed.
I like to upgrade my computers every three or four years. Things change so quickly and I like to have the latest for however that lasts.
The past 50 years has seen the grestest leap in technology. I alwaye say a mind is a terrible thing to waste (not original) and the older generation may eventually become up to date. E-mail has had a lot to do with the seniors.
My military career is another story.:)

Hi Apple Jack!
Thanks for replying -- your story is really interesting! My dad's first computer was an Apple II. Unlike you, though, he abandoned computers for awhile. It took my mom's keen interest in getting on the Internet in the mid-1990s that spurred my dad to invest in a PC and training.

My military career is another story.Well, given your year of birth, I assume that means you're a WWII veteran? So were two of my uncles. (One is still alive; one was a career Navy man.)

Anyway, I'm really happy for you that you must be in good enough health to be able to enjoy your new "monster" of a PC. I think you're right, that always being open to learning new things and keeping one's mind active helps keep a person in good shape. My uncle mentioned above who's still alive is an artist. He is also virtually blind. But he keeps on painting. I admire him a lot. :-)

Thanks for sharing your stories and let us know how you like your new Puget PC when it arrives!
-- Max

You're an angel Richard. Many sales people tend to be bloodthirsty.

In the 1980's when shopping for a car I had the luck of dealing with an honest salesman. This guy worked at my local Toyota dealership and talked me into buying a car that was more than adequate and below my budget. The rest (past and present) of them have been selfish.

Benevelont salespeople exist, but they're rare.

I think he's got a point though. I had a friend come up to me the other day, and say "You know, a high-end gaming computer is more expensive now than it's ever been". That seemed counter-intuitive to me, but the more I thought about it, I think I can see what he means.

It's because of the existence of things like PhysX cards, Killer NICs, and X-Fi sound cards. None of these things are even close to the category of 'necessary', but the ceiling of hardware is higher than ever before. People see the high-end system as having all these things, a RAID 0, and a bunch of other stuff. When the ceiling is pushed higher, there's just a psychological feeling that your own system is inferior.

Lets say your car needs to go 30 mph for your work commute, and you've got one that can do 40mph. Not bad! All of a sudden your friends get sports cars that can drive in at 90mph. Your car feels diminished even though it's more than adequate for your needs. It's purely a psychological issue, but one that can't be written off.

I also don't want to diminish the hobby of high-end enthusiasts. There's a lot of people out there that love to have the best, and more power to them! I do my best to point out how the can save some cash, but if they're really after a top-end, no sacrifices system, it's my job to get that to them. :)

Hi Richard,
I understand what you're saying.

There's a lot of people out there that love to have the best, and more power to them! I do my best to point out how they can save some cash, but if they're really after a top-end, no sacrifices system, it's my job to get that to them.
Absolutely! And clearly Apple Jack is happy you were able to help him get that type of system.

Richard, I think you and I are on the same page with all of these issues. Perhaps I didn't express myself as well as I could have in my last post. :o