We had a great time at PDXLAN23 this weekend, where we were both a sponsor and an attendee.

At our booth out in the lobby, we provided free loaner equipment for things people might have forgotten -- ethernet cables, power strips, DVI cables, mousepads, and much more.

We brought a number of GPU support braces that we make at our shop, and handed them out. A gaming event like PDXLAN sees a LOT of big heavy video cards, and when you move around your gaming PC, those video cards need to be supported to prevent any damage to your system. Our braces provide that support, so we handed them out for free to anyone that could use them.

We provided free repair services for anyone whose gaming rig got damaged on the ride to the event. We were able to help a number of people, and other booth sponsors as well! Not only were we repairing PCs for people, but we were providing help installing some of the many prizes people won at this event, so they could start using them right away.

We really enjoy providing these services, and appreciate the gratitude everyone showed! 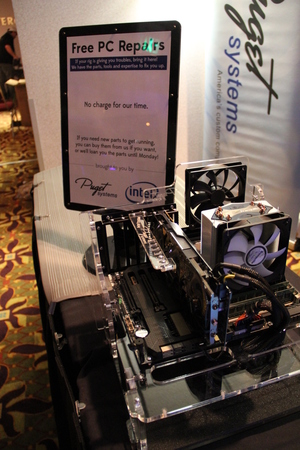 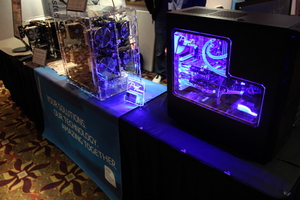 At our booth, we also showed off a number of our PCs.  We brought a high end gaming PC similar to our Deluge L2, which was powering an ASUS PQ321Q 31.5 Inch 4K monitor.  Gaming at 4K gaming resolution takes a lot of horsepower, and we showed we could not only provide a gaming PC up to the task, but we can also make one that runs very quiet even under load.

We gave away this monitor at the end of the weekend -- congratulations to Ray as the winner!

But gaming wasn't the only thing we were here to show this year. We do a LOT more than gaming at Puget Systems. 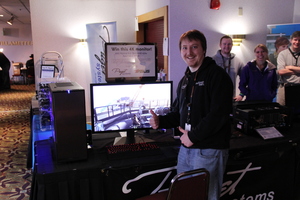 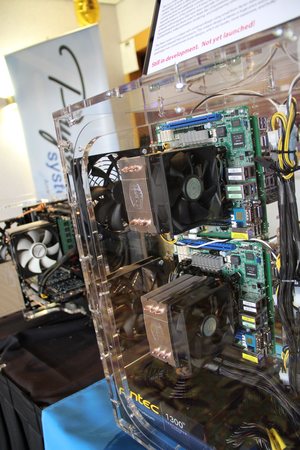 We also brought a number of our business focused products this year, which were well received. Our Peak cluster, still under development, but the power of EIGHT Intel Haswell PCs into one box -- an excellent value of performance, and a great starting cluster for new projects or for education. We're aming to have this product launched by the end of the month, and we appreciate the input many of you had for us! 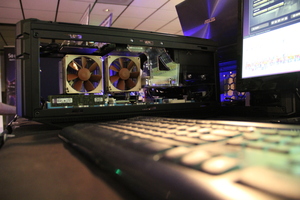 The Peak Stacker is ideal for small businesses who need servers, but don't want a rack.  The Peak Stacker fits dual Intel Xeon performance into a small, nearly silent box.  Run just one, or if you need more, stack them on!  Three of them stacked together is perfect for VMware using their Essentials bundle pricing (which covers 6 CPU sockets). The Peak Stacker is also ideal as a compute module. Develop your code on your laptop, then simply plug into the ethernet line on the Peak Stacker, and offload your compute load. 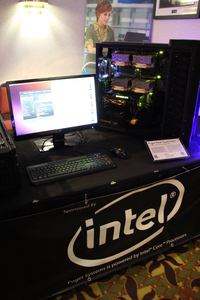 The Peak Quad Xeon is an intense workstation, with four Intel E5-4600 series Xeons, up to 1TB memory, up to 72 SSD drives, and more. It is very useful in situations where you cannot distribute your load across multiple workstations -- either because the code is unable (ie, MS Excel), or because your licensing is per node, making it cost prohibitive to license across more workstations or servers.  Of course, true to Puget Systems nature, we put all this horsepower into a workstation that is nearly silent. 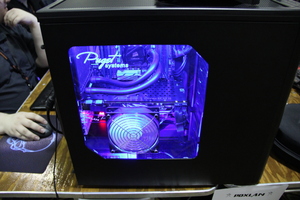 Lastly, we also were there to game! We brought a few of our Deluge gaming PCs to the gaming floor, and took turns heading in and putting in some hours in the games.

We had a great time this weekend, and look forward to sponsoring PDXLAN 24 in July!