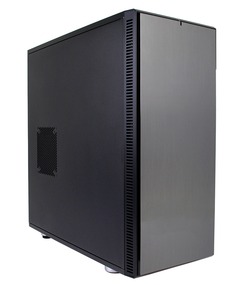 SEATTLE, WA - Puget Systems (www.pugetsystems.com), a boutique integrator of custom computer workstations has announced the release of its new product: the Peak workstation, a line of accelerated parallel computing workstations. The first model will feature the Intel Xeon Phi Co-Processor and is designed for development work for the new co-processor.

"Our intention was to design a system that really spoke to the needs of developers. We know that Intel Phi is still very new, and in need of a lot of developer time. We wanted to make a product designed for that purpose, making choices that took us in a different direction than what is already available on the market." said Jon Bach, President of Puget Systems.

The first iteration of the Peak is in a tower workstation form factor which allowed Puget Systems to utilize their 12 years of experience in bringing down the decibel output of the PCs they manufacture. "We know that developers typically have their stations right there in their workspace, so we made reducing the fan noise a priority. Who wants to work next to a jet engine all day?" added Bach.

Puget Systems also made the decision not to simply rebrand an existing pre-configured base chassis platform from a 3rd party provider. Instead Puget Systems has independently selected and qualified each component that is put into the Peak, and has independently designed a quiet cooling system. "It was important to us to do this work ourselves. In order to do this right, we need complete control over the product design, so that we know that we are really using the best combination of components to create a highly reliable system for our users. When you have specialized boxes like this, it is not so easy for a developer to just jump onto another system in the office if theirs goes down." said Matt Bach, head of Puget Labs, the research arm of Puget Systems. 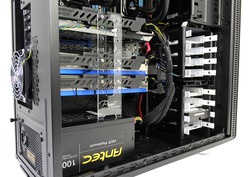 Currently Intel is only shipping the passively-cooled version of the Intel Phi which brought unique challenges. "Cooling cards that are designed to operate at temperatures above 80C inside a case that is mostly sealed up to keep it quiet is a real challenge." added Dr. Donald Kinghorn, Chief Scientist for Puget Systems.

Dr. Kinghorn continued, " We worked up an Arduino based thermal monitor and fan controller that lets us achieve good cooling and low noise across multiple cards with a single push-pull fan array. Being able to write up our own code for the controller gave us the flexibility we needed to handle all load cases and still keep things quiet."

This is the first of several version of the Peak to be launched in the coming weeks. Next up:  a 2U rackmount unit capable of housing up to four Intel Phi or NVIDIA Tesla cards, and a small form factor box designed for portable use by scientists and professors.

"We have created a flexible platform for Intel Phi developers looking to start working with the card and writing code," says Dr. Kinghorn. "We want them to be able to do their work whenever and wherever is the most convenient for them without losing the computing power they need from the Intel Phi or NVIDIA Tesla cards."

Availability
The new Puget Systems Peak workstations are available immediately for configuration on the Puget Systems website. Product is in stock and available for ordering online.

Photography
Full sets of high resolution photography of each Peak workstation configuration is available is available at the Puget Systems press resource site.