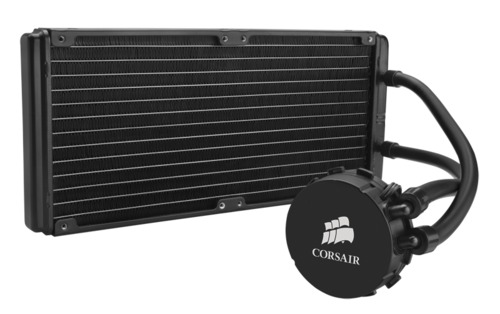 This Corsair Hydro series cooler is a self-contained CPU liquid-cooling solution. It is designed as an all-in-one alternative to the normal CPU heatsink/fan units found in most computers. The advantage the Corsair Hydro offers over air-cooling is the ability to keep hot-running processors at lower temperatures. This allows the use of higher wattage CPUs, and can allow better overclocking performance as well.

Jon Bach (President) Says:
There is a LOT of cooling power in this unit. A 140mm radiator has about 50% more surface area than 120mm, and this unit has double that again. We have cooled 150W processors with this unit, no problem. You do, however, need to make sure your chassis has all the fan spots necessary for this radiator.

Ruben Romero (Quality Control Subject Matter Expert) Says:
I like the H110 and have appreciated the thermal advantage it provides to our systems. The pump is louder than the H60, though the small sacrifice in noise is made up by lower CPU temperatures.
Model: Corsair CW-9060014-WW

Hydro Series H110 is an all-in-one liquid CPU cooler that provides cooling that's far superior to stock CPU air fans. Liquid cooling simply works better than air cooling, and the self-contained design of the H110 makes it easy for you to protect your valuable CPU.

For efficient cooling, bigger is better - it's simple physics. If your PC's case can fit a 280mm radiator, Hydro Series H110 will give you better performance. The larger diameter fans provide better airflow with lower noise than most 120mm fans, and the 280mm radiator has more surface area for faster cooling.