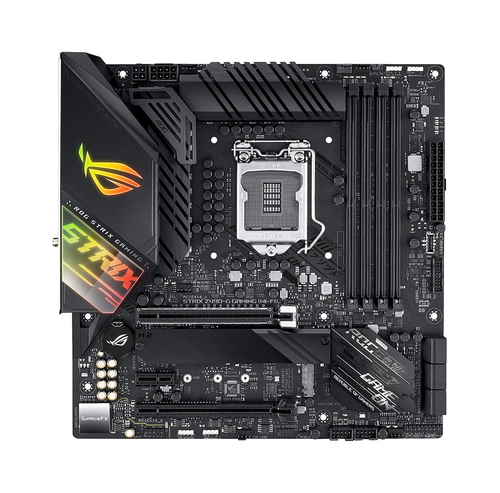 The ASUS ROG STRIX Z490-G is a Micro ATX motherboard for Intel's 10th Gen Core Processors (code named Comet Lake). It sacrifices some of the expansion capacity that a larger motherboard can offer, but still supports up to 128GB of DDR4 memory as well as multiple SATA and M.2 drives.

For external connectivity, it also has both analog and digital audio outputs, 2.5Gb Ethernet, WiFi 6, Bluetooth, and eight USB ports of varying speeds (including one Type C). Thanks to the Intel graphics on the CPU, there are also HDMI and DisplayPort video outputs available.

William George (Puget Labs Technician) Says:
The onboard Ethernet controller on this motherboard doesn't behave well under Linux, so if you are going to use that OS (and assuming you want wired networking capabilities) I would recommend adding a dedicated NIC.
Model: Asus ROG STRIX Z490-G GAMING(WI-FI)