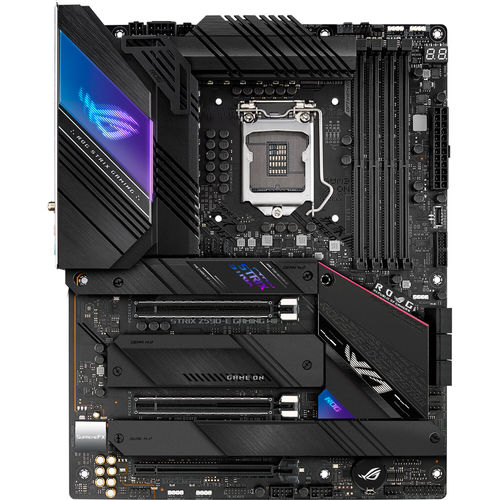 The Asus ROG STRIX Z590-E WIFI is an ATX motherboard for 10th and 11th Gen Intel Core processors. It offers a full range of features, a good mix of I/O ports, and solid build quality.

In terms of connectivity, this board is well rounded. It has HDMI 1.4b and DisplayPort 1.4 video output for use with the Intel graphics built into the CPU - a great backup option, in case the dedicated video card in a system isn't working. It also has both analog and digital audio outputs, 2.5Gb Ethernet, WiFi 6e, Bluetooth 5.2, and ten USB ports across a mix of speeds (including two Type C ports).

Internally it has four DDR4 slots for memory, allowing up to 128GB of 3200MHz RAM. Drive connectivity includes six SATA III ports plus four M.2 slots, though some of those share resources with PCI-Express slots. Speaking of expansion, there are three PCIe slots in varying sizes. If an 11th Gen CPU is used, the primary and secondary PCIe slots will run at Gen4 speed, as will two of the M.2 drive slots. The slot spacing works for dual video cards as well, but please note that when anything is installed in the secondary slot it will cause the primary slot to drop to x8 lanes. Additionally, if the second M.2 slot is used then it will cause the secondary PCIe slot to drop to x4 lanes.

William George (Product Development) Says:
This board offers a lot of options, but due to the limited number of PCI-Express lanes provided by the CPU and chipset there are some trade-offs required depending on which features you want to use.
Model: Asus ROG STRIX Z590-E GAMING WIFI