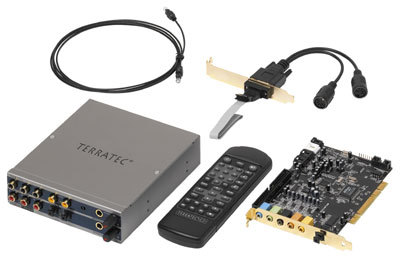 Whether from left to right, from the rear of from the front: With Aureon 7.1 Universe, top games and movies on DVD become the ultimate experience in sound with captivating realistic surround sound. And even musicians get their money's worth, because numerous sound sources can be connected to the Aureon 7.1 Universe, for example, to transform the PC into a multitrack hard disk recording studio.

The included 51/4" front module also opens audiophile opportunities for sound enthusiasts. Next to stereo inputs and outputs for analog and digital devices (optical and coaxial) are connections for headphones and microphone. But that's not all. A direct connection from the tape deck or record player is also possible - and classic audio treasures are converted to superb digital sound using the supplied power package consisting of phono amplifier (with hardware RIAA equalization) and professional software for converting old recordings! Last but not least, the PC can also be controlled via infrared remote control using the front module.

Whether DVD, music or games - the Aureon 7.1 Universe adapts itself to commercial standards: The surround sound systems offers many commercial standards, for audiophiles and gamers alike: Sensaura 3D, EAX, ASIO, A3D, DirectSound. Using "non-audio mode," DTS and AC3 streams are directly transferred to the optical digital interface where they can be processed by other devices (e.g. surround receivers). Incl. extensive software, such as DVD player and Sound Laundry TerraTec edition 2.0.