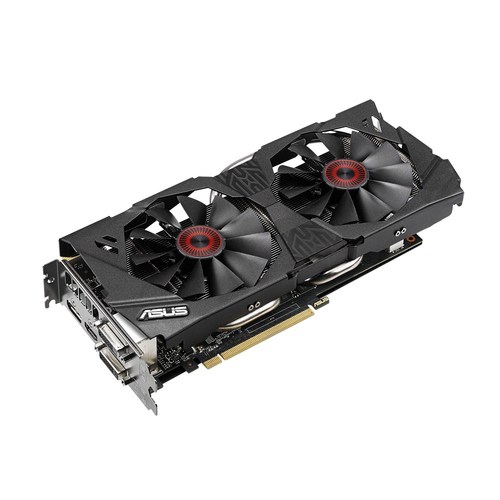 NVIDIA's GeForce GTX 970 is one of the first high-performance graphics cards using their new Maxwell GPU architecture, positioned directly below the flagship 980. The main thrust with this new design is efficiency, rather than a big increase in performance - but it still manages to match or beat the previous generation GTX 780 in gaming tests. More importantly, the GTX 970 reaches that level of performance with much lower power usage and heat output than the 700-series. That translates directly to lower temperatures and quieter operation.

In addition to its great efficiency, the GTX 970 inherits other features common to the GeForce line. It is excellent at maintaining good frame-rates in games, not dipping too low even in graphics-laden titles, and includes support for CUDA, DX11, and NVIDIA's 3D Vision technology. Finally, it supports up to four usable monitor outputs: 2 x DVI, HDMI, and DisplayPort.

This particular variant of the GTX 970 uses a dual-fan cooling setup, rather than the reference NVIDIA design. This means increased cooling for the card and reduced noise levels, but most of the heat from the card is vented inside the computer rather than being exhausted out the back. It also comes slightly overclocked by the card manufacturer.

Ruben Romero (Senior Production Technician) Says:
The STRIX series cards have been an open armed welcome from ASUS. Even more so for the GTX 970 where the stock heatsink has loud cavitation noise. The STRIX series fans do not spin when under light use and are quieter under loads compared to reference cards. A great selection for quiet computing.

Houston Bennett (Social Media & Community Manager) Says:
I upgraded to this card from a GTX 760 and it's made a world of difference. It's quieter, in general, but can become quite noisy when the fans ramp up to full blast; that doesn't happen often though. Since NVIDIA recently announced the next generation of video cards some might wonder if it's worth picking up a card like this. I'd say yes. It provides the horsepower necessary to run most everything on HIGH settings at 1080p and will hold you over well until those 1440p 144hz monitors come down in price and become the new norm. Until then, this is a great card for those that can't afford or don't need the top-of-the-line, bleeding edge, new hotness.
Model: Asus STRIX-GTX970-DC2OC-4GD5