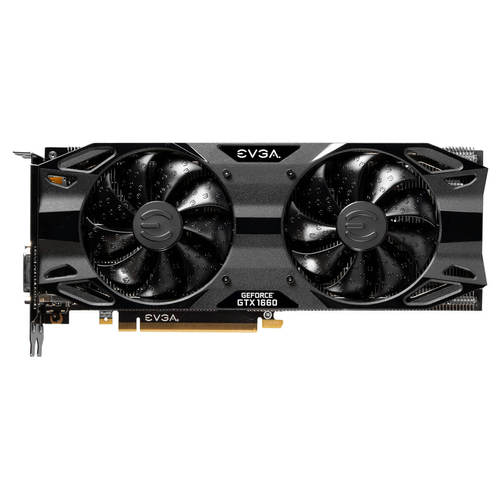 NVIDIA's GeForce GTX 1660 6GB is a mid-range GPU, just a little slower than the 1660 Ti. While it is based on Turing technology, the older naming and numbering scheme is still used because this card is missing some of the more advanced features that are found on the RTX 2000-series. That means no hardware ray tracing (RT cores) or machine learning inference (Tensor cores) - but for more traditional applications which don't use those capabilities the GTX 1660 is a fine option.

This particular model from EVGA features a dual-fan cooling layout. This is great for keeping a single card running cool and quiet, but results in most of the heat the card generates being pumped back into the computer. That makes these a poor choice for use in multi-GPU systems, especially in configurations where there will be no space between each card. When installing more than one video card in a system, models with a blower-style fan and rear heat exhaust will be much better.

Finally, in regards to connectivity, the EVGA GTX 1660 supports up to three monitors. Most of the video output standards from the past decade are included, with one connection each for DVI-D, HDMI, and DisplayPort.

William George (Puget Labs Technician) Says:
For those curious about the details, the GTX 1660 differs from the 1660 Ti in two primary ways: ~9% fewer stream processors (1408 vs 1536) and ~33% slower memory (GDDR5 instead of GDDR6). Both of these are solidly mid-range video cards, for their generation, but there is a measurable difference in performance... and price.
Model: EVGA 06G-P4-1167-KR