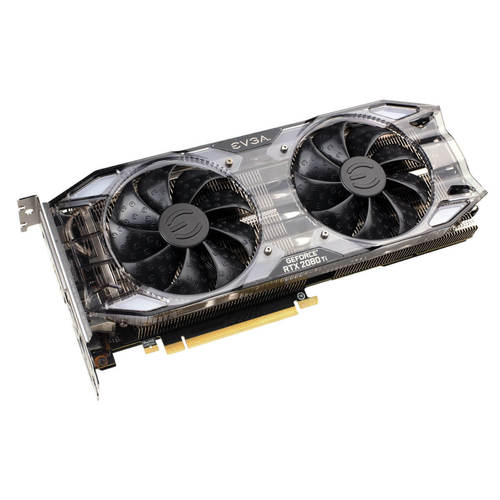 This variant, from EVGA, has a dual-fan cooling layout. This is great for keeping a single card running cool and quiet, but results in most of the heat the card generates being pumped back into the computer. That makes these a poor choice for use in multi-GPU systems, especially in configurations where there will be no space between each card. In those cases, a video card with a blower-style fan and rear heat exhaust will be much better.

Ken Colorossi (Repair Technician) Says:
The 20 series EVGA cards are extremely reliable and after the fans spin up they are one of the quietest cards currently on the market. However, I will say that there is a slight 'click/hum' noise when the fans first spin up. Since the default fan curve of the card has the fans at idle, you can hear the fans click on/off for light-medium loads if you are working in a quiet office. You can mitigate the fan noise by setting a default fan curve to anything above idle either through a VBIOS flash or using an application like EVGA Precision XOC.
Model: EVGA 11G-P4-2382-KR