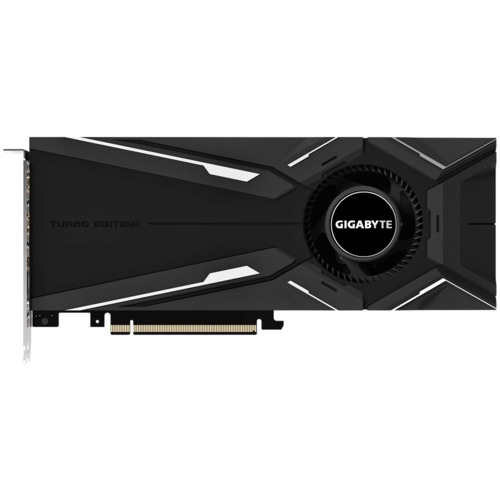 This particular variant, from Gigabyte, has a single-fan "blower" style cooler. This won't be as quiet under load as a dual-fan design, when comparing individual cards, but since it exhausts most of the card's heat out the back of the computer it is much better for use in multi-GPU configurations.

William George (Puget Labs Technician) Says:
This is a minor revision that brings a few nice changes: a more standardized length, rear power connections, and proper rear mounting holes for bracing. This makes it even better suited to multi-GPU use in tower and rackmount systems! I've also heard that this particular card has a more aggressive fan profile, meaning it could be a little louder than other cards of similar design - but again that makes it well suited to multi-GPU configurations where cooling is critical and noise is a secondary concern.
Model: Gigabyte N208TTURBO-11GC rev2.0