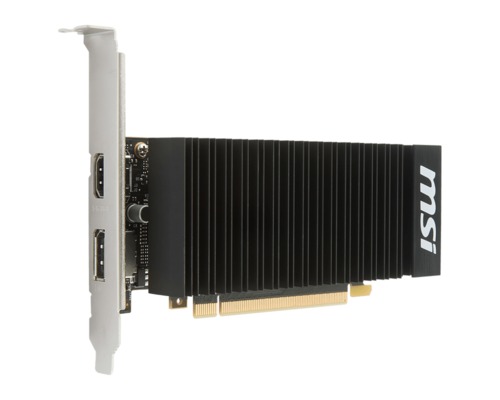 The GeForce GT 1030 is an entry-level dedicated video card from NVIDIA. It is generally a step up from integrated graphics, which are built into some CPUs from Intel and AMD, but it is more commonly used for basic video output on systems that don't already have that functionality built-in. It can also be effective for providing two additional monitor outputs, if the applications being run are not dependent on GPU performance.

MSI's version of this card is passively-cooled, meaning it has no fan... but the heatsink is quite tall, taking up the slot next to the video card as well. As alluded to above it has two video outputs: HDMI and DisplayPort, which can be used at the same time. It is also low-profile, allowing use in some cases which cannot accommodate a full-height card.