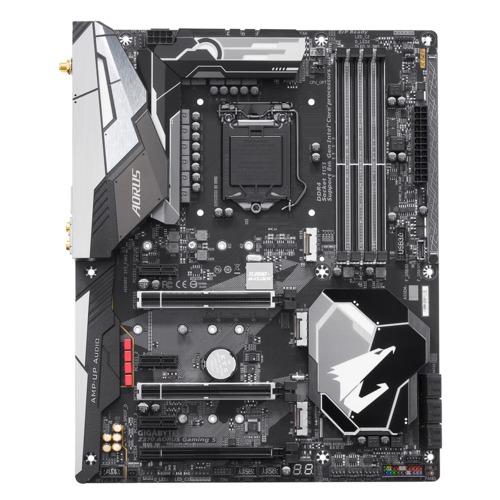 In terms of connectivity, this board is very well rounded. It has both HDMI and DisplayPort video outputs - allowing dual monitor usage without a dedicated video card. For memory it has four DDR4 slots, allowing up to 64GB of 2666MHz RAM. Drive connectivity includes several SATA III ports plus three M.2 slots. It also has both analog and digital audio outputs, gigabit Ethernet, WiFi, Bluetooth, two USB 2.0 ports, four USB 3.0 ports, two 3.1 ports (including one Type C), and even a legacy PS/2 port. In terms of expansion card support, there are six total PCI-Express slots in varying sizes. SLI and Crossfire are supported as well, though when two video cards are installed the PCI-E slots they are in run at x8 speed rather than x16.

Houston Bennett (Social Media & Community Manager) Says:
This is a pretty straight forward board. Easy to build with, fan headers are placed in easily accessible locations and the USB 3.0 port up by the 24-pin power connector makes wiring a bit neater. The shroud over the I/O ports is a little big for my tastes but that's really the only negative. I especially like that the first x16 slot is a little lower, which means your hot GPU is further away from your very hot CPU allowing for some better cooling. Also, it's kinda fun to play with the built in RGB LEDs even though we ship our systems with them off by default.
Model: Gigabyte Z370 AORUS GAMING 5