Anton credits his work style and approach to his background as a skateboarder. While most people see a concrete staircase or metal railing, Anton sees possibilities. His brain is wired to look at something in the world and go, "well what if…" The best skaters are extremely imaginative in the way they utilize their board, body, and terrain. Like surfing or ballet, it's an art form and style and important. The way a person does something, and the intention behind it, it just as important as the thing itself.

When Anton comes up with a project idea, he asks himself if he's just doing it or is he challenging himself to perform something difficult using a new technique that conveys the story he wants to tell? Part of learning to skateboard is learning to accept failure as part of the learning process. Unlike most sports, there is no coach or rule book. It's just you, creating whatever your mind can dream up.

Skateboarding also teaches you to accept failure as part of the process. There’s no coach, no rule book, just you. Falling on your ass is inevitable and it’s part of the journey to becoming better.

From a software standpoint, Anton is completely self-taught. While attending Boston University, he majored in Film and TV and focused his efforts on storytelling, directing theory, and communications.

He uses Adobe After Effects, Illustrator, and Photoshop each day, so the Creative Cloud Suite is essential to his workflow. He also uses Cinema 4D quite a bit, and recently upgraded to Maxon One, which packages C4D with Redshift and the Red Giant suite of tools. Dual 4K monitors sit atop his Autonomous desk where he can sit or stand during the day. He also uses an iMac as a third monitor with a USB switcher mounted under his desk which allows him to switch his mouse and keyboard between his Windows workstation and Mac. Anton recently added a mechanical keyboard, precise wireless mouse, and tablet to his workflow as well. 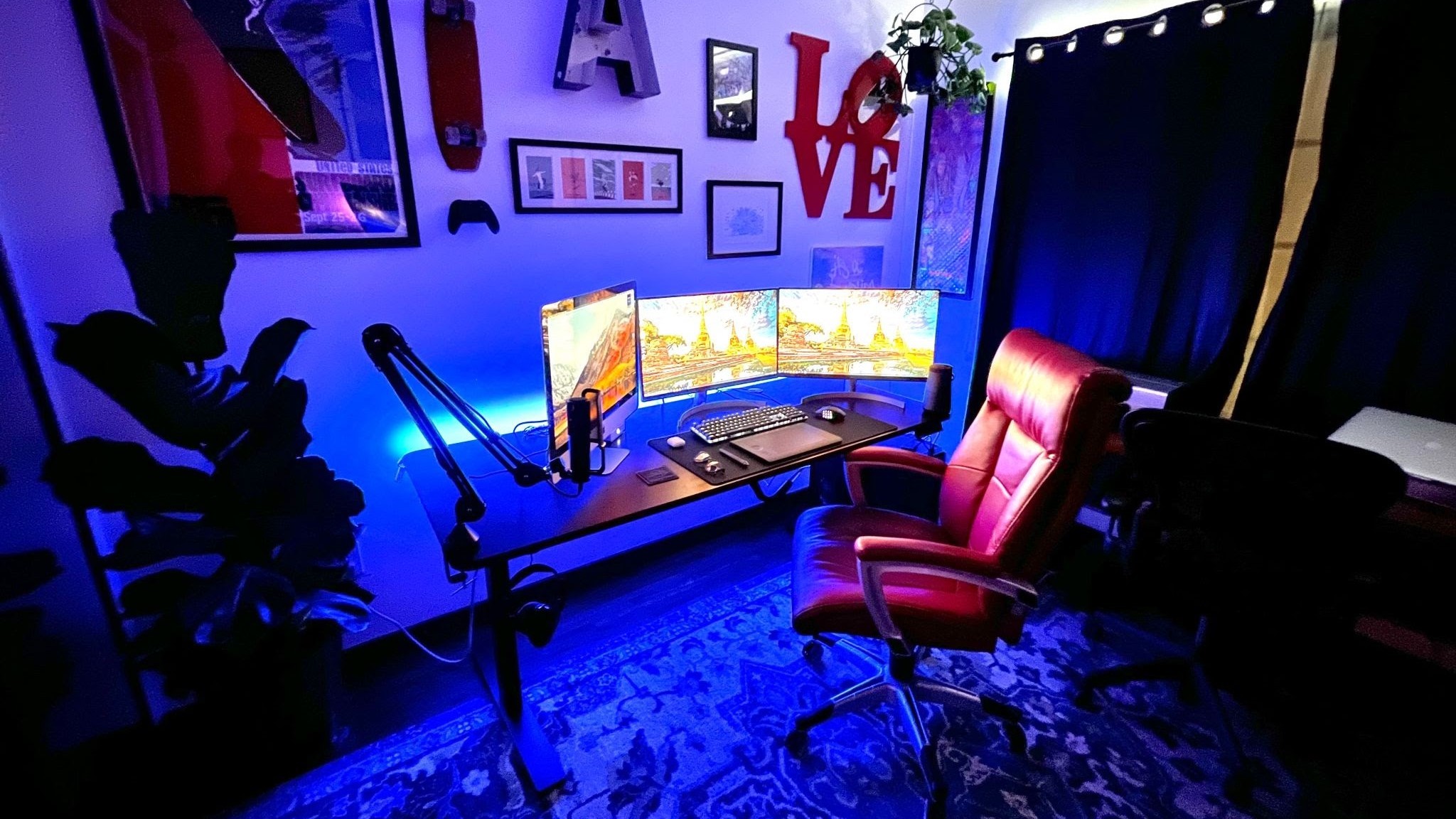 Many of the challenges Anton faces come down to using the tools at his disposal to meet the deadlines of his clients while still delivering high-quality work.

The biggest change he's faced has come in the last year, with the pandemic changing how people work. In the past, it was expected that a freelancer would come into a studio, perform their job on a company computer, and then go home. With work-from-home taking over in 2020, studios and agencies adapted, and proved that teams of artists, directors, and producers can work from their own computers at their own homes, with the same (or better) output than they had achieved in the past.

Outside of the past year, Anton has used a Mac since 2014 when he was in college. One reason he came to Puget Systems is that he wanted to harness the power of GPU rendering tools like Redshift and Octane. This just wasn't possible on the Mac. As his 3D skills expanded, he wanted to keep up with the industry standards, and he knew it was time to fully dive into the workstation market.

Puget Systems worked with me to build the perfect machine for my needs. Puget’s professional knowledge, tech support, and warranty options made it a no-brainer.

Photorealistic 3D rendering requires lots of calculations, and it was a daunting chore to Anton. Slow render times interrupted the creative workflow and forced him to abandon or avoid projects that excited him, but for which he didn't have the correct tools at hand.

Anton knew he wanted the best for his freelance business, and Puget Systems came recommended to him by his peers. Puget Systems worked with Anton to design the ideal workstation for his needs that could handle his growing list of complex projects.

Having access to the right tools for the job has allowed Anton to work with some of the biggest creative companies around such as Disney Park, TikTok, and Adobe.